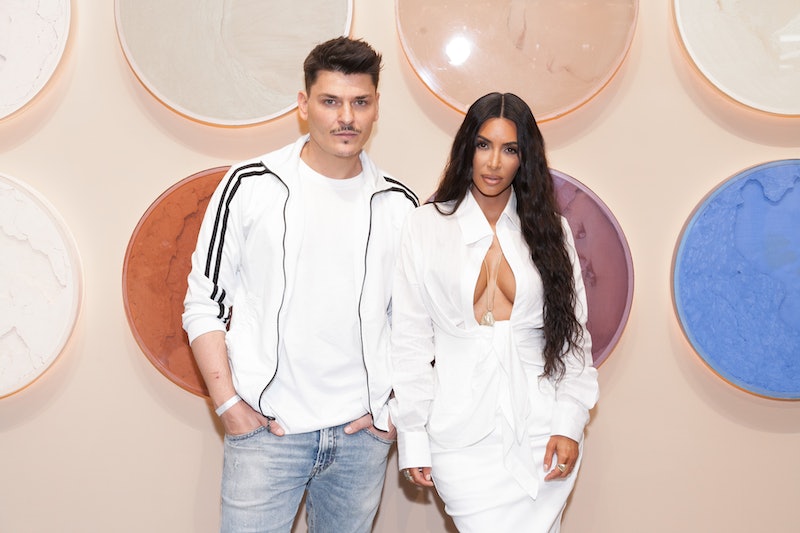 It's no secret that the Kardashian-Jenner family has a plethora of makeup artists they depend on for their glam. But one name, in particular, may stand out: Mario Dedivanovic. The artist has been Kim Kardashian West's makeup artist for years, and now the pair are teaming up again on a new KKW Beauty x Mario palette.

On Oct. 21, Dedivanovic posted an IGTV video to his account wishing Kardashian West a happy birthday and naming her his "eternal muse." The video, however, wasn't just for the KKW Beauty owner's birthday. It also revealed that a brand new KKW x Mario palette is in the works and looks to be nearly done.

The video begins with Dedivanovic pranking Kardashian West on set but soon moves into black and white footage that hides what they're actually there for: the new collection. Throughout the IGTV, fans can see both Dedivanovic and Kardashian working side by side to craft the perfect 10-pan eyeshadow palette, ultimately swatching the shades onto KKW's arm. At one point, the makeup artist holds up what seems to be the finished product and exclaims, "Oh my god, this looks so good!"

Of course, the video was just a teaser for what's to come, but clearly this dynamic duo has been hard at work.

In the footage, KKW Beauty customers get more than just a look at a potential eyeshadow palette. It seems that this dynamic duo has more in store for fans.

During the video, several palettes are laid out in front of Kardashian West and Dedivanovic, and while most look to be the same design as her traditional eyeshadow palettes, there are also mini sizes with six pans. Whether these are a combination of highlighters, blushes, and bronzers or mini shadow palettes is yet to be seen, but it would mark new territory for the two.

Another item on the table: lips. While these could be existing KKW Beauty lipsticks that the pair are using to make sure the collection is cohesive, the original KKW x Mario collection did, in fact, include Kardashian's signature nude lips colors. More could certainly be coming.

Only time will tell what the second KKW x Mario Collection will look like, but based on Dedivanovic's video, it's likely coming soon.