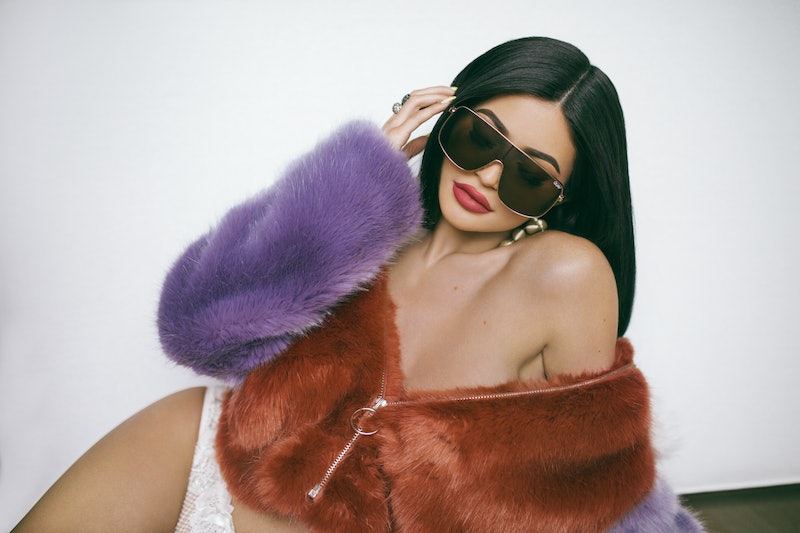 The world might be filled with unofficial Kardashian-Jenner baby news right now, but this is something you can count on. According to an Instagram announcement, Kylie Jenner created a second Quay collection for fall, and it's coming very soon. The throwback-inspired frames will have you feeling like an A-lister right at home.

If you thought the first round of Quay x Kylie sunnies was exciting, you won't believe what's coming. Jenner created seven sunglasses with the brand, and this time they're even more wearable than the last. Each one is inspired by the "DGAF attitude of the '80s and '90s," according to the press release, which means clear frames, bulky lenses, and an oversized fits.

You can preview every single one of the sunnies out on the Quay Australia website right now. According to the website, each one will be $65. That's $10 cheaper than the styles from the first time around.

According to the brand's Instagram post, Quay x Kylie Drop II will be available on Oct. 4 at 11 a.m. ET/8 a.m. PT. Yes, that soon. Start scraping your pennies together because the collection is coming.

All of the styles will be limited edition, which means you'll want to shop while you can. If it's anything like the first time around, the items will sell out extremely fast.

Compared to the first set of sunnies created by Jenner, this one is much more conventional. The first drop brought geometric-styles frames and extremely oversized aviators, but the look this time is more traditional.

There will be three style available — '20s, As If, and Unbothered. Each one comes in multiple color choices, so you can personalize them to your fall wardrobe.

The first pair, '20s, are rectangular-shaped sunnies that look like they came right out of the '90s. As If is also a subtle nod to the '90s decade, and comes in pink, orange, and blue. They are perfect for those of you feeling a bit unconventional. Last, but definitely not least, comes Unbothered. The ski goggle-esque shades are extremely oversized and bring the drama.

If you're not quite up to date yet, you'll be happy to know that you can still shop the A-lister's first collection on the Quay website. Although the original stock sold out extremely fast, the brand did a great job of restocking the limited edition products afterwards.

Fingers crossed that they will do the same for Drop II, since these are even more wearable and more affordable than the first set.

Both the brand and the social media star have shown their excitement about the collection on Instagram. While the duo don't give their fans a whole lot of time to save up in advance, it's pretty exciting that they're not making people wait ages for a product.

The two aren't the only ones excited about the launch, either. Fans are freaking out over the launch, and already planning their shopping plan of attack.

Jenner know what her fans want and there's no doubt about it.

Fans are dying to know every single detail about the collection.

Short, sweet, and to the point.

People are congratulating her on the sunnies and they're not even out yet!

All the heart emojis to you, Jenner.

Kylie is a style star in her own right, so there's no surprise that she created another collection that people are going bonkers for. With so little time before the launch, let's hope that Jenner pulls the sunnies out of her style arsenal and shows the world — or at least Snapchat — how they look IRL. Maybe that will help you choose.