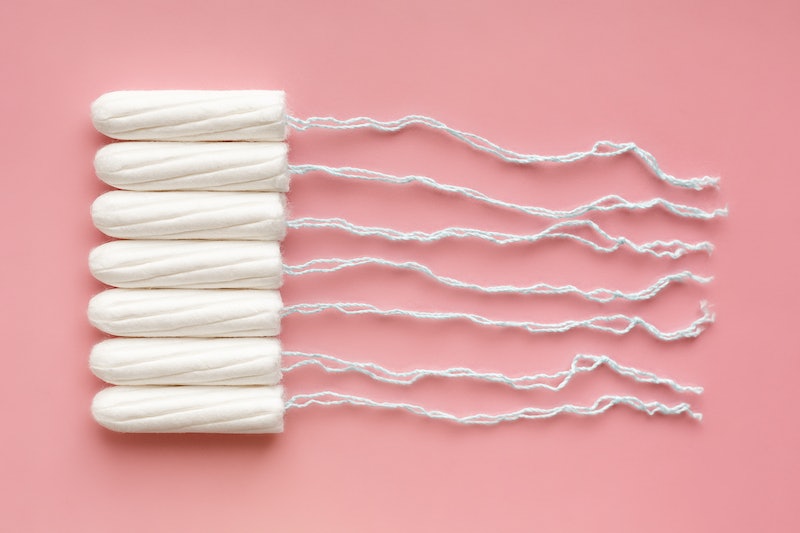 When it comes to dating someone new there are no longer any rules about how you meet, how fast you progress in the relationship, and what boundaries you put in place. If the mood feels right, talking about kinks, desires, and your sexual history can feel totally normal fairly soon into knowing each other. However, there still appears to be a major taboo around periods. A study has found that half of UK adults wouldn’t have period sex, and one in twenty went as far to say that they think people should keep the details of their menstrual cycle to themselves. In a time when sliding into DMs, going to bed together on the first date, and seeing more than one person is acceptable, it’d seem that period sex is the final frontier.

Considering that periods are a perfectly natural process that happens every month, there’s still an element of stigma that surrounds them. Bodyform questioned 2,000 people about their attitudes towards periods and sex. Of the people who said they wouldn't have sex on their period, more than half of the people said they felt unclean, 44% said they don’t feel sexy at that time of the month, and 35% said they simply don’t like it. One in four of those surveyed actually said that they think period sex is "disgusting."

While the logistics of period sex (as opposed to sex when you're not on your period) are a little different, the period tracking app Flo writes that having sex while menstruating can have a number of benefits such as less need for lubrication and a shortening of the time you menstruate for, as orgasms can speed up the shedding of your uterine lining. And, for many people, having sex on their period is more pleasurable as your libido changes throughout your cycle. On top of that, Flo states that having an orgasm can actually relieve menstrual cramps. So, TBH, it seems like a no brainer.

Bodyform commissioned their survey in a bid to get people talking about periods and period sex. Traci Baxter from Bodyform said in a statement: “Sex is an important part of many relationships, and periods are a totally natural part of life. No-one should feel embarrassed or uncomfortable discussing either subject with the people they’re close to, especially their partner.” She continued:

“Whether people choose to have sex during that time or not is personal and up to them, but because of the taboo, many never even have a conversation about it.”

And it’d seem it’s not just sex that people won’t do while on their period. Of those surveyed, 70% of the women aged 18-24 had cancelled a date because they were concerned that there would be a possibility of sex while on their period. They survey also showed that one in five adults wouldn’t even talk about periods to their partner, with women stating it’s embarrassing, a turn off, or that their partner is just not very sympathetic.

It seems a little strange that, in 2019, when you can generally find a community for any kink, sexual desire, or preference, periods and period sex is still seen as such a taboo subject. Whether you want to have sex on your period or not, that’s totally you’re choice, but everyone should feel comfortable talking about what is, in fact, a totally normal process.

More like this
GIRLI & Q Fell In Love At A Skatepark & Never Looked Back
By Jessica Morgan
Jess & Anya Are The High School Sweethearts Who Gave Love A Second Chance
By Jessica Morgan
5 Ways To Stand In Solidarity With Women In America From The UK
By Sophie McEvoy
Are Gemini & Leo Compatible In A Relationship?
By Kristine Fellizar
Get The Very Best Of Bustle/UK