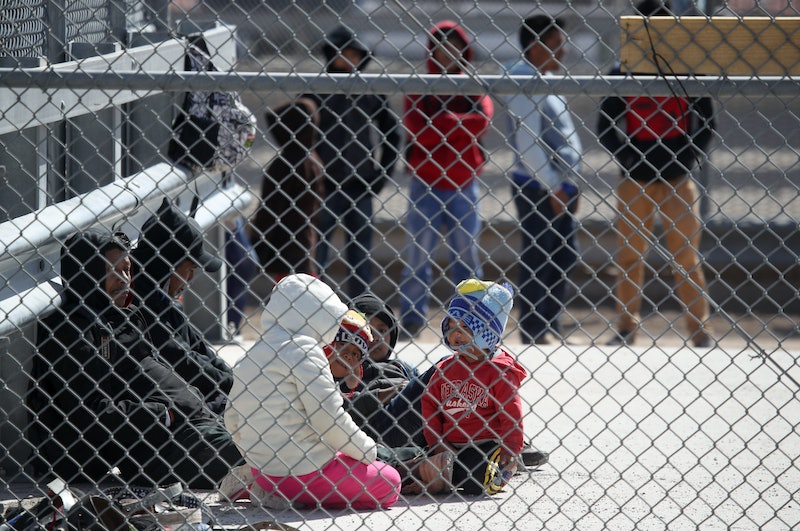 As the federal government grapples with how to respond to the amount of undocumented people in the United States, the Trump administration is reportedly considering deporting migrant families first, according to CNN. As of Sunday, there is no formal plan to institute such a policy, although CNN reports that the idea is under consideration. Bustle has reached out to the Department of Homeland Security (DHS) for comment.

The Department of Homeland Security currently lacks the resources to remove every person with deportation orders who is living in the United States, according to CNN. The proposal would be intended to deter human smuggling. Three unnamed U.S. officials told the news outlet that White House adviser Stephen Miller was bolstering the proposed initiative.

Under Trump, DHS has faced hefty criticism for how it handles undocumented migrant families entering or applying for asylum in the United States. Only a year ago, the department came under fire for its then-policy of separating undocumented families at the U.S.-Mexico border. The ripple effects of that so-called "zero-tolerance policy" are still being reported and analyzed, even though it has since been rolled back.

In April, for example, The New York Times reported on court documents that said it could take up to two years for the government to reunite all separated children with their families. The Times report also indicated that thousands more children may have been separated from their families than previously reported, per a January report issued by government inspectors.

As the Trump administration remains overwhelmed with the number of people with deportation orders, officials have prioritized deporting those undocumented migrants who have criminal backgrounds, according to The Hill. The policy reportedly traces back to the Obama administration, and was renewed after Trump took office.

The president has promoted hardline immigration policies since he was on the campaign trail. "We also have to be honest about the fact that not everyone who seeks to join our country will be able to successfully assimilate," he said in a campaign speech several months before he was elected, for example, according to a transcript published by the Times. "Sometimes it’s just not going to work out. It’s our right, as a sovereign nation, to chose immigrants that we think are the likeliest to thrive and flourish and love us."

Whether or not the reported proposal to prioritize the deportation of migrant families will ultimately take place is currently unknown. DHS is in the midst of a leadership change after former Secretary of Homeland Security Kirstjen Nielsen resigned from her post in April. Kevin McAleenan was named acting secretary following her departure.

"While we face many challenges, including a growing crisis on our southern border, I know that, working together, we can overcome them," he said in a statement in early April. "I’ve also learned that the true strength of DHS is our people, and during my time as Acting Secretary, I pledge to be an aggressive advocate for you."

Whether the reported proposal to prioritize the removal of migrant families with deportation orders ever comes to fruition, the Trump administration has made clear where it stands on immigration policy, in general. It's likely that officials will continue to act in accordance with those principles.