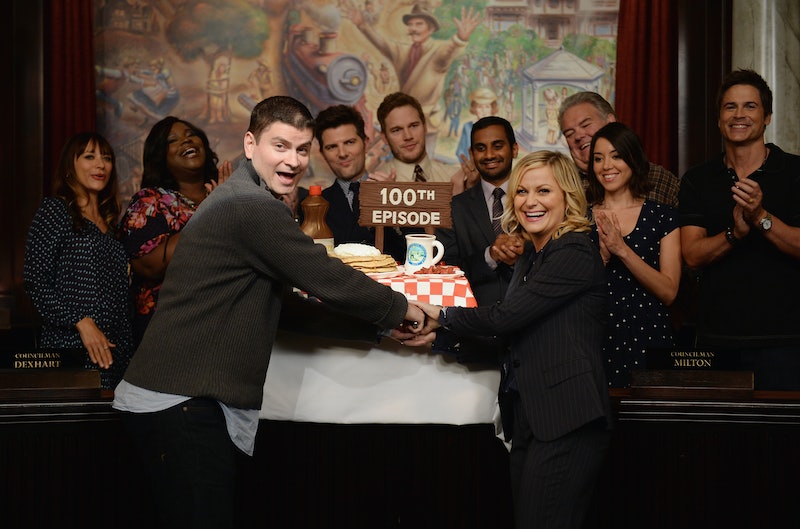 Merry Congratu-Christmas, citizens of Pawnee! In March, in order to celebrate the 10th anniversary of the cult favorite sitcom, the cast of Parks & Recreation will reunite at PaleyFest 2019, where we can only assume that they will celebrate with all of the bacon and eggs that they have. "We’re thrilled to be reuniting at PaleyFest. And truth be told, we were all hanging out already anyway, so carpooling will be easy," the show's star, Amy Poehler, and creator Mike Schur told Entertainment Weekly in a statement.

Parks & Recreation, which ran from 2009 until 2015, chronicled the ups and downs of a local government office, led by the incredibly idealistic Leslie Knope (Poehler) and the government-skeptic Ron Swanson (Nick Offerman). It quickly became a fan-favorite, thanks to its long list of wacky, small-town characters — including the legendary Lil Sebastian, the state-famous small horse — its hilarious take on female friendships and its inspirational stories of Leslie fighting for the little guy in her many battles with Pawnee's city council.

The PaleyFest reunion comes after plenty of speculation about whether or not fans can expect a Parks & Recreation reboot sometime in the future. In early December, Poehler told Variety that she's always willing to reprise the role of Leslie Knope. "I am technically available," she joked at the Smart Girls 10th Anniversary dinner in L.A. "I have like six of Leslie’s blazers in my closet, so anytime."

However, Poehler did note that Schur might be too focused on another hit NBC comedy to focus on attempting to bring the citizens of Pawnee back to the small screen. "Our king is busy doing his highly successful show, The Good Place," Poehler said. "We really can’t jump without Mike. So when Mike is good and ready, I'm sure we'll show up like good soldiers."

And she's far from the only cast member who would love to return to the Parks Department in the future; in June, Chris Pratt revealed that he'd "love" to play Andy Dwyer once more, and even offered up a few ideas for his character's next chapter.

"Oh, man, as long as I'm in town, yeah, I'll do it. It films like 10 minutes from my house so that would be dope. I mean, you can't film Parks and Rec without Andy." Pratt told E! News. "I miss Andy too. I would love it. I know I would do it." As for what everyone's favorite shoeshiner-turned-kids television star would be doing in 2018?

"I think he becomes a weatherman," Pratt told E! News. "He would be a good weatherman. He would have no idea what he's even saying."

Of course, the Parks & Recreation cast doesn't need a formal excuse for a reunion, if their social media presences are any indication. Back in February, several female cast members — including Poehler, Rashida Jones, Aubrey Plaza and Kathryn Hahn — got together to celebrate "Galentine's Day," a holiday invented by Knope on the show, for "ladies celebrating ladies."

Over the summer, Poehler and Offerman had an unofficial reunion of their own, when they teamed up to host the crafting competition show, Making It. The show was perfect for Parks & Rec fans who were missing the show, as it allowed Offerman to channel his crafty, woodworking character in order to showcase the talents of "makers" from all around the country.

Sure, it's not quite Pawnee, but it will still warm your heart just as much as a big plate of waffles and whipped cream.

In the wake of a more formal reunion, fans will just have to rewatch Parks and Recreation once (or twice) more in order to make it through to March.