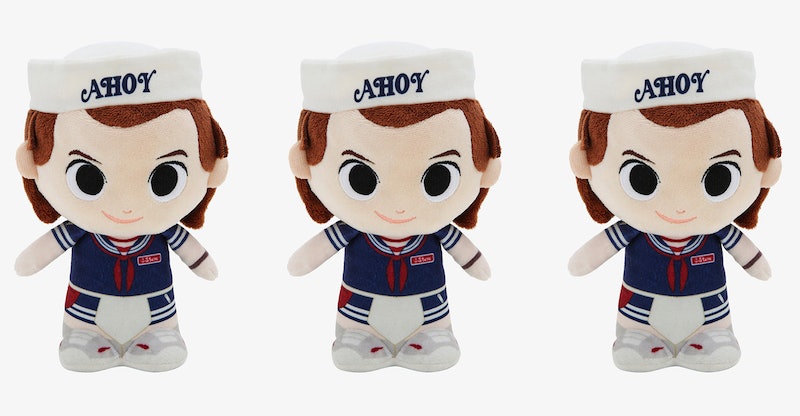 If you can’t stand the anticipation of the July 4 premiere of Stranger Things season 3, perhaps this will sooth your antsy soul: Hot Topic is selling a plush version of Steve from Stranger Things. Yes, the store in the mall where you lived out all your goth teen, graphic tee fantasies is now indulging in your Stranger Things habit. What a world we live in now.

Pop culture toy brand Funko, known for their collection of Pop! figurines, created the Steve Harrington plush as part of their Stranger Things season 3 collection. In addition to the Hot Topic-exclusive Steve plush, Funko has a collection of exclusive Pop! figurines like a glow-in-the-dark Will the Wise only available at Target and a Walmart-only Dustin.

“Anyone in the mood for ice cream?” the product description asks. To which we scream, LITERALLY ALWAYS. “Don’t forget to stop by Scoops Ahoy. Steve is in his Scoops Ahoy uniform, from season 3 of Stranger Things.” Scoops Ahoy is the ice cream shop where we see Steve working in the Stranger Things season 3 trailer. Per Hot Topic’s website, plushie Steve is imported (exciting!), made of polyester (humble!), and 7.5 inches tall (we stan a short king!). It’s also currently on sale for $13.52, down 20% from $16.90. (Steve is a frugal icon! It’s canon now!)

If plushies aren’t your thing (Gasp! Scorn!) Hot Topic is selling a bunch of other Stranger Things merch you can get your hands on ahead of the season 3 premiere. There’s a Stranger Things Scoops Ahoy ringer tee and a Scoops Troop patch in case you really want to go full “Scoops Ahoy coworkers with Steve Harrington fantasy.”

They’ve also got a Stranger Things-themed ouija board, and it’s on clearance for “buy two, get two free.” In lieu of your traditional, ouija-style letters and numbers, this board is decorated to look like the alphabet wall. What could you possibly need four Stranger Things ouija boards for? Literally anything! They make the perfect take-away goodie for your Stranger Things-themed seances. They’re also great if you’re looking to decorate an entire wall with ouija boards. “Maybe an otherworldly power from the Upside Down or the spirit of Barb is listening!” the description reads. (Are you there, Bob? It’s me, someone still devastated from season 2.)

We could all use a little comfort food after last season, and, luckily, Stranger Things fans have plenty of food options. In honor of the upcoming third season, Burger King has a limited-edition Upside Down Whopper available at 11 (...get it?) locations around the country. For dessert, you can indulge in Baskin-Robbins’ Stranger Things-themed ice cream. Their spread includes flavors like Eleven’s Heaven (waffle cone-flavored, obviously) and the Upside Down Sundae which is served, as the name suggests, with the toppings on the bottom.

If you’re looking for fully immersive fan experience, you’ll want to check out the Stranger Things pop-up fairs happening on the coasts this summer. The carnival-like experience will have cover bands, food eating contests, photo booths, and ice cream provided by Scoops Ahoy.

David Harbour has said that the season 3 finale will be the most emotional episode yet. “You get to see a lot of that throughout the season and it's very unexpected what happens in the end and it's very, very moving,” Harbour teased during the MCM comic-con earlier this year. “I think episode eight is the most moving thing we've ever shot.”

Given the emotional twists and turns the series has already taken its audience on, I'm not sure if that’s a promise or a threat. Perhaps you’ll want to cozy up to your Steve plush while tuning for the season 3 on Netflix July 4.