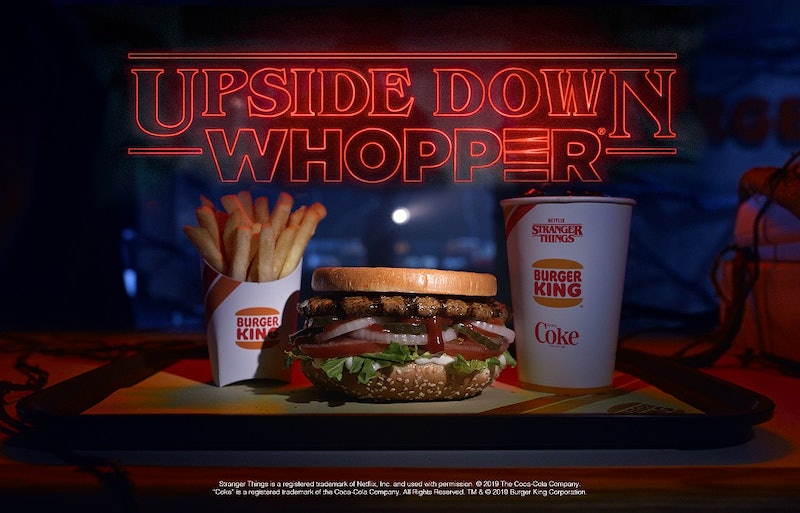 In honor of next month’s Stranger Things season three premiere, Burger King is launching an Upside Down Whopper. It is a Whopper. It is literally served upside down. It is an homage to the ooky spooky alternate dimension to which we lost Barb in season 1 of the show. (RIP, Barb. We’ll pour some ketchup out on your behalf.)

Starting on June 21, a select number of restaurants across the U.S. will be serving Upside Down Whoppers in partnership with Coca-Cola and Netflix. That select number is 11, a nod to the show’s character played by Millie Bobby Brown. Everything has a reason or at least that is what I’m telling myself as I try to understand why a restaurant would promote a sandwich where the top bun is at the bottom.

The Upside Down Whopper uses the same ingredients as a regular Whopper. However, it comes in limited-edition Stranger Things-themed packaged and is presented, in the packaging, upside down. If trying to eat an upside down burger stresses you out, you could also just flip the Whopper right-side up.

Here are the 11 cities in which a select Burger King location will be serving the Upside Down Whopper: Miami, Houston, Boston, Atlanta, Philadelphia, Dallas, Chicago, San Francisco, Los Angeles, and New York. These 11 locations will also have other Stranger Things-inspired goodies, like limited edition t-shirts, crowns, ketchup packets, pins, and hopefully zero demogorgons.

As part of the Stranger Things promotion and partnership with Coke, Burger King customers at all locations will also have the chance to win cash and prizes. For a limited time, guests who purchase any soft drink at Burger King will have the opportunity to win “swag, food, cash, airline tickets, a car, and even a Stranger Things VIP Experience.”

Starting June 13 until June 20, Burger King patrons will also be able to buy a “Hopper Meal,” named for the show’s police chief played by David Harbour. The “Hopper Meal” includes a Whopper, small fries, and a small drink. It’s available to customers who order through DoorDash using the code “STRANGER,” giving them access to “exclusive” season 3 Stranger Things content. The press release does not specify what that exclusive content is. Again, hopefully it involves exactly zero demogorgons.

If upside down burgers aren’t your thing, perhaps Baskin-Robbins’ Stranger Things-themed ice cream will be more your style. The promotion includes flavors like “Eleven’s Heaven,” which features waffle cone-flavored ice cream, and the “Upside Down Sundae,” which, as its name suggests, comes with the toppings at the bottom. Are these themed treats a bit of a stretch? Sure, but at least they’re difficult to eat.

Perhaps we should just be happy that the Upside Down Whopper doesn’t involve black food coloring a la Burger King’s Black Burger. The goth burger, made with squid ink, was released in the U.S. as part of a Halloween promotion. Perhaps the spookiest part of the sandwich was that it turned your poop green.

Though it does paying homage to the nightmare-inducing Upside Down, at least this limited edition Whopper doesn’t lead to any actual nightmares. Maybe that’s Burger King already did that with an actual promotion they ran last year: the Nightmare King burger. According to a release, Burger King conducted “a scientific study over 10 nights with 100 participants (or should we say victims?) who ate the Nightmare King before they went to bed.” Per the study’s lead doctor, “after eating the Nightmare King, the data obtained from the study indicated that the incidence of nightmares increased by 3.5 times.”