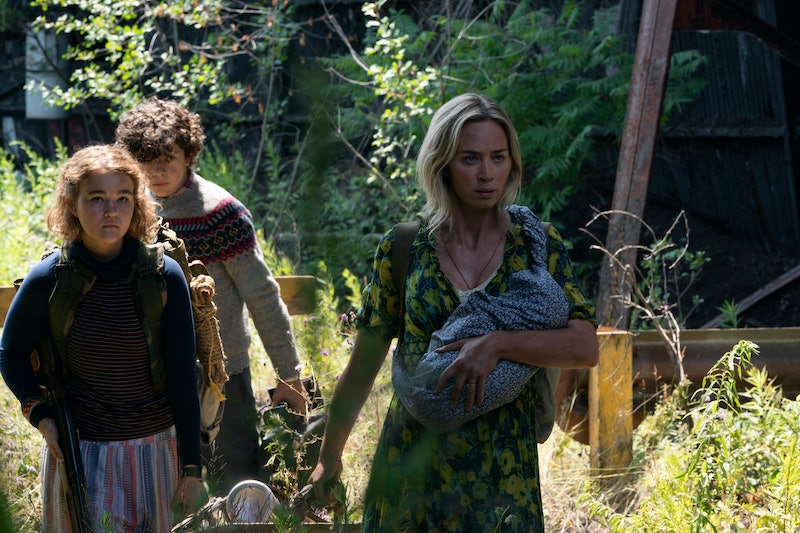 Not every movie needs a sequel, and John Krasinski believed that was true of his hit horror film A Quiet Place — until an idea he couldn't ignore hit him. During the movie's recent red carpet premiere, Krasinski told Variety that A Quiet Place II is a "love letter from the kids to the parents," making it the inverse of the original film, which the director previously described as a "love letter to his kids" in a 2018 interview with MTV News. With his character, Lee — spoiler alert for A Quiet Place — dead, the Abbott family from the first film is moving forward without their dad, and the kids, particularly Millicent Simmonds' Regan, are stepping up to take care of their mom and baby brother.

Emily Blunt, who plays the kids' mom Evelyn, needed some serious convincing from her director husband to believe there was a valid reason to return to the world of The Quiet Place. Then he pitched her the opening moments, which flashback to when the noise-sensitive mutant creatures arrived, and revealed to her that Simmonds, who is a deaf actor, would be the lead. Blunt was sold.

Just like when the first film was released, plot details for A Quiet Place II are scarce. The sequel will once again be driven by the need for the characters to remain as silent as possible in order to survive. But there are hints that the core family of Regan, Evelyn, Noah Jupe's Marcus, and the new baby will face a bigger threat than the creatures: other people. Cillian Murphy and Djimon Hounsou have joined the cast as other survivors, per Entertainment Weekly, but specifically in the case of Murphy's character, they've survived in a very different way than the Abbott family.

"[Our] family has support, they have an entire system of living, and most importantly, they have love," Krasinski explained to EW. "If you are alone and you've seen the negative effect of the world, you lose hope."

In the trailer, Evelyn whispers, "There are people out there, people worth saving." That sense of humanity appears to be the driving force behind the sequel. Evelyn and Lee want their children to still be good people despite the post-apocalyptic landscape they're growing up in. And with Regan taking center stage, there's a good chance viewers will get to see her make her parents proud.