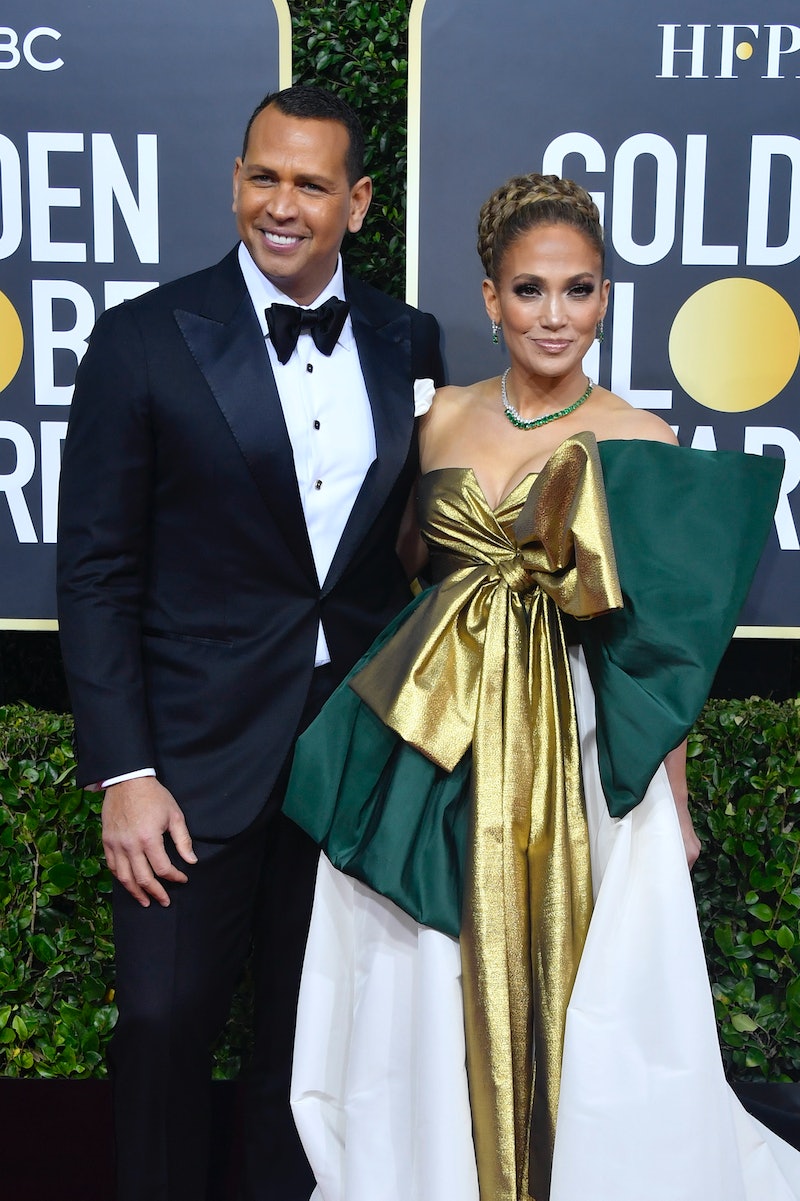 Never failing to give support to his fiancé, Alex Rodriguez's tribute to Jennifer Lopez after her Golden Globes loss reminded the star of how she "inspired and empowered" people around the globe. On Sunday, Jan. 5, A-Rod posted a photo of J.Lo on the red carpet on Instagram, and included a supportive message. Lopez was nominated for Best Supporting Actress in a Motion Picture at the 2020 Golden Globes for her role as Ramona in Hustlers, but lost to Laura Dern, who was nominated for Marriage Story. And while it might have been a bit of an upset, the athlete wants everyone to know that there are more important things than awards.

In his lengthy caption, A-Rod reminded Lopez not to let the loss get her down, writing, "it doesn’t take a trophy, medal, or plaque to identify a true champion." He went on to describe all the people the star had inspired, calling his fiancée a champion to, "millions of young women who have watched you and have been inspired and empowered to do amazing things in their lives." The former MLB star also noted how Lopez would continue to be an inspiration for the, "countless musicians, dancers, actresses, and performers" looking to, "emulate your passion, drive and work ethic."

The tribute also included a shout-out from the star's loved ones, with Rodriguez writing that, "your children, your family, your coaches, your staff, and your extended family," all considered her to be a champion. He added: "To everyone whose lives you enrich daily, you are a champion. And don’t you ever forget it."

As usual, Lopez appreciated the encouragement from her future husband. "You are my everything," she commented. Friends and fans of the couple reacted to the sweet post as well, with Oprah Magazine writing, "We co-sign this message" and singer Carole Sager adding, "amen!!"

A-Rod has shared uplifting messages for J.Lo on social media throughout the promotion of Hustlers. On Thursday, he posted a selfie with Lopez after she won the Palm Springs International Film Festival Spotlight Award on Instagram, writing that the star, "crushed it as Ramona and is deserving of every accolade that comes from it." Back in March of 2019, A-Rod praised J.Lo's work ethic ahead of Hustlers filming on Instagram, writing, "Love you baby and continue to shine, fly high and inspire all of us."

Even though Lopez didn't take home an award at the 2020 Golden Globes, her performance could still be recognized at the SAG Awards, for which J.Lo's nominated for Outstanding Performance by a Female Actor in a Supporting Role, and she's a current favorite to be nominated for an Oscar. As for A-Rod, his duty as unofficial Hustlers hype man and Lopez cheerleader seems far from done for this award season.