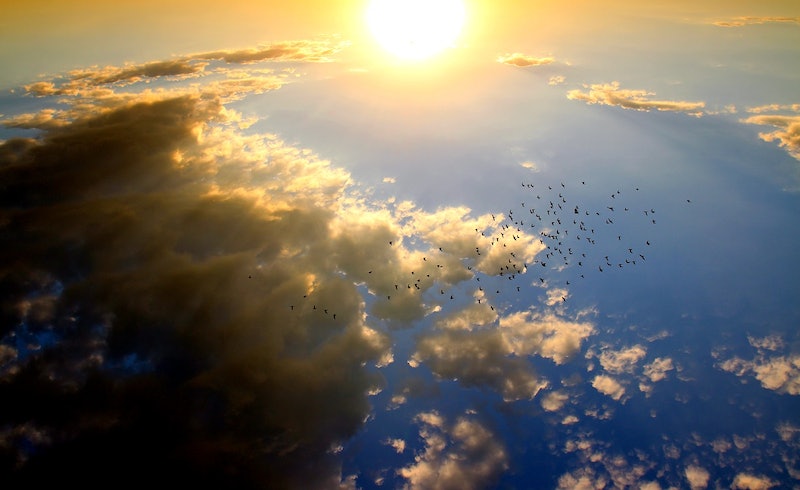 We're going to the sun! Sort of. NASA must've said "meh" when someone asked them about Mars, because their new solar probe is headed on a mission to the sun to explore its environment and how it works and hopefully, you know, not catch on fire or anything.

NASA has successfully studied the rings and moons of Jupiter; they landed the Mars rover; and the moon is so yesterday. The sun is next on their agenda, and they've revealed that in the summer of 2018 — somewhere between July 31 and August 19, if all goes according to schedule — their latest probe, the Solar Probe Plus, will fly past Venus, past Mercury, and head on over to orbit the giant star in the sky that supports all life on our planet. It will be the first mission of this kind. No big deal or anything.

Because the Solar Probe Plus can't (yet) set up shop right on the sun, it'll get cozy at around four million miles above the sun's surface. "But what on earth — er, on sun — can a probe do four million miles away?!" you ask. Lots. It'll examine the atmosphere, measure low-energy particles coming from the sun, observe how the sun might be affecting space weather, observe the physics within it, and hopefully give NASA lots of helpful information to make conditions better on astronauts and space satellites.

The probe is still under construction, so it's likely the technology will become even more sophisticated. We know that at the very least, the Solar Probe Plus has a cooling system, which is probably for the best, unless NASA wants the probe to get one hell of a sunburn.

The sun has remained relatively mysterious to us, and the Solar Probe Plus could bring answers to some of the most elusive mysteries that have continued to escape science. Here's why the sun is so crucial and so bewildering, and thus we should all be stoked about this new exploration.

(P.S. If you want to join in the countdown, you can follow the Solar Probe Plus countdown clock.)

1. It's Literally The Center Of Everything

Everything in our lives, anyway. The sun is the center of our solar system, and its enormous mass draws all the other planets in toward it. If the sun were to suddenly disappear for whatever reason, earth and the other plants would possibly fly off into outer space in a straight line, in whatever direction they were already going in. I don't know about you, but I'd like to avoid that.

2. The Sun Prevents Earth From Becoming A Snowball

Without the sun, we'd be dead. To be clear, we'd be frozen and coated in ice. And dead. Scientists have estimated that if the sun were to poop out, our average global surface temperature would plummet below zero degrees Fahrenheit in about a week; and it would continue to drop. In a year, it could be below -100 degrees, and the top layers of the world's oceans would freeze over.

3. It's The Reason For Photosynthesis

We have the sun to thank for why plants have the energy they need to grow and provide us with food and oxygen. Plants have evolved over the course of millions of years to learn how to take the sun's energy and use is efficiently — something human beings can't do. What makes it even cooler is that it's thanks to plants' sophistication that we have oxygen to breathe. They take the sun's energy and combine it with carbon dioxide and water to produce the air we need to survive, and the food we need for nourishment. Without all of this, life would cease to exist.

4. Nothing Is A Coincidence

It doesn't end with the warmth and light the sun provides.

Researchers have found that the biggest reason we exist on this planet is because of the exact distance between the earth and the sun, and the conditions the sun has created, allowing us to live here. The situation could be even just slightly different, and life might not be sustainable. Pretty incredible, right?

5. The Sun Is Responsible For How We Perceive Time

A day wasn't always a day. Our prehistoric ancestors noted only that sunrise meant they could start hunting, gathering, and farming. Sunset meant darkness and the reappearance of different animals. But it was the repetition of this pattern that created the concept of a day, and the repetition of many days to create a year. Something that seems so obvious now was once a mystery. Could today's sunny mysteries be tomorrow's no-brainers?

6. It Helps Cause Ocean Currents

Ocean water experiences an interesting process thanks to the sun. The sun heats the surface water, causing some to evaporate. This then increases the concentration of salt in the surface water. Since this water is more dense, it sinks to the bottom, while less dense water will rise to the top and take its place. What do you get? Currents. There's more at play here; but without the sun, things wouldn't be as we know them.

7. The Sun Is Crucial To Our Everyday Health

Many people don't realize it, but we need a little sunlight to stay healthy. The sun can improve our mood, reduce stress, and give us energy, just to name a few benefits. Unfortunately, most Americans are deficient in the vitamin D that it provides us with, which causes a whole host of nasty side effects. Catch a few rays, people, and say thanks for all the sun does!