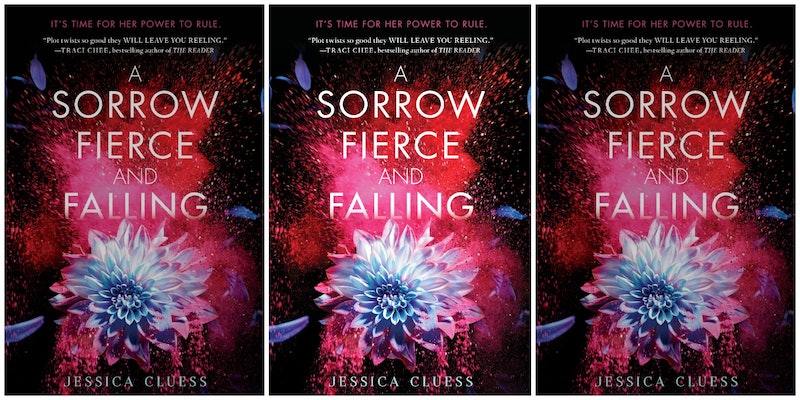 When Jessica Cluess's YA fantasy A Shadow Bright and Burning burst onto the scene in 2016, readers were swept away into the world of prophesied sorcerer Henrietta Howel. Readers followed her dangerous, mystical journey in book two, A Poison Dark and Drowning, and in October, fans will finally get to know how everything ends in the third and final book, A Sorrow Fierce and Falling. Bustle has the exclusive cover reveal and an excerpt from the finale below!

A Sorrow Fierce and Falling follows Henrietta and Lord Blackwood, who, after suffering terrible losses, have led their warriors to Sorrow-Fell, a vast estate where only those invited by a Blackwood may enter. It's the ideal place to plan a final assault against the Ancients. Henrietta nervously awaits her marriage to Blackwood, and when the ritual to become his bride reveals a dark secret, she realizes that Sorrow-Fell is not a safe haven; it’s a trap. Convincing the sorcerers of this, however, is not easy.

So with Maria, the true chosen one, and Magnus, the young man who once stole her heart, at her side, Henrietta plots a dangerous journey straight into the enemy’s lair. Some will live. Some will die. All will be tested. In the exciting conclusion to Henrietta's journey, she must choose between the love from her past, the love from her present, and a love that could define her future. While battles rage, the fate of the kingdom rests on her decision: Will she fall or rise up to become the woman who saves the realm?

And if you think that's exciting, just wait until you see the stunning cover below!

A Sorrow Bright and Burning by Jessica Cluess, $12, Amazon

Though the thrilling end to Henrietta's story won't be hitting shelves until Oct. 16, 2018, Bustle has an exclusive excerpt from the book to hold you over until then. Keeping reading below!

“Henrietta.” Blackwood sounded both surprised and awed to see me.

We stared at one another. Lord, he was... well. He was everything a young bride on her wedding day should want. His morning coat was dark green, which set off the brilliant color of his eyes. Tan breeches tucked into gleaming boots defined his strong, slender legs. The cut of his suit hugged his broad shoulders and tapered waist. His night-black hair had been combed back, and a lock fell before his eyes.

I felt myself flush. A part of me wanted nothing more than to drag him to the chapel, marry him, and only then tell him what I had discovered.

Sometimes, I hated being rational.

“It’s bad luck to see you before the ceremony.” Blackwood strode over, taking me into his arms. I hadn’t realized how cold I was until he enveloped me in his warmth.

I felt myself flush. A part of me wanted nothing more than to drag him to the chapel, marry him, and only then tell him what I had discovered.

“I gather you’re not that upset about it.” I skimmed my fingers through his hair.

“Not all traditions are important,” he whispered, and kissed me. The dark, nameless desire that slept inside me awoke, eager for more and more of his touch. When we broke apart, I laid my head on his chest.

“You’re distracting me.” I smiled.

“Not from anything too important, I hope,” he whispered in my ear. God, why did my resolve weaken with his touch? He kissed my cheek, then captured my mouth with his again. I wanted to forget everything else; indeed, I could barely recall why I’d come. A small voice inside me reminded me that there’d be plenty of time for this later.

“I need to tell you something.” I broke away to compose myself. “About the old druid lands.”

His black brow lifted. “So. You completed the ritual.” Blackwood sounded pleased, even as he took in the somewhat bedraggled sight of me. My gown, which had begun as a confection of blue satin with a low, square bodice and intricate lace at the wrists, was damp and spotted with mud. I could only wonder at the state of my hair. But in Blackwood’s gaze, I found only desire. “You’re beautiful, Henrietta.” He made as if to kiss me again. The hungry part of me wanted to fold myself against him and forget everything else. But I held out my hand, stopping him before I forgot why I had searched him out.

“Yes, the ritual’s done,” I said. “But I wanted to talk about the druid lands themselves. When a Blackwood bride goes to make a sacrifice, what is she supposed to find?”

“Well. You’re not supposed to find anything. Slice a dove or a raven’s breast, and then.” His gaze sharpened. “Henrietta, do you mean to say that you saw something?”

“It was more than that. I’ve had visions before, but the circle provided more than that. It was as if I’d been absorbed into a moment in time. I’m not sure why I saw them. It could have been on account of the pomegranate.”

Blackwood blinked. “Is that... code for something?”

“Maria thought I should sacrifice fruit, not a bird.” I shrugged. “Perhaps the druid lands enjoy fruit.”

“There is a stone circle,” I said. “Twelve stones, all about ten feet high.”

“Yes. And they were covered in runes.”

Now I had his full, hungry attention. “What type of runes?”

“All types. And when I touched the stones—”

My words were lost in a blare of horns. Even here, deep inside the great Faerie part of the estate, they echoed. Blackwood and I went to the door as the horns blared twice, then three times. That was the call of the barrier patrol. Three blasts meant that something was approaching from the west.

My stomach flipped. Blackwood and I raced out of the old parlor and back into the main house. Pain flared in my shoulder as I ran, but I forced it down. In the distance, I could hear the thunder of hooves. The ground trembled with it. Bloody hell, were the Ancients attacking en masse? Was even our ultimate stronghold unsafe from R’hlem?

Last time I’d seen him, I’d plunged a dagger into his heart when he showed one moment of weakness and love. I doubted he would ever make that mistake again.

“My lord.” One of the guards, Virgil, ran to greet us. He was a rosy-cheeked sorcerer, scarcely two years older than I.

Last time I’d seen him, I’d plunged a dagger into his heart when he showed one moment of weakness and love.

“Is it an attack?” Blackwood glanced ahead, trying to gauge the danger. The sorcerer shook his head.

“The barrier’s clear of enemies, my lord. But there’s an entire army of people charging straight for us.”

“Soldiers?” Hope flared through me. Perhaps some regiments in the queen’s army had made their way north to us.

“They’re ordinary citizens, but there are sorcerers with them.”

Sorcerers, traveling with common people? I was pleasantly surprised.

“Should I call for your coach, sir?” the boy asked. Blackwood and I looked at each other. Words were unnecessary; we grabbed our staves out of their sheaths at the same time.

Yes, I wore my stave, Porridge, with my wedding gown. I was a bride, but I was also a sorcerer.

Blackwood and I summoned the wind together and flew for the barrier. The winter chill easily sliced through my cloak and silk gown. Traveling this way, the ten-minute walk to the barrier shortened to two. We arrived to find an entire battalion of sorcerers waiting shoulder to shoulder with staves in hand. Dee was getting his men into line. So was Wolff, easy to pick out because of his height. I searched for Maria but didn’t see her bright red hair.

Through the clearing mist I caught flashes of movement. There was a roar from somewhere in the forest, the sound of voices shouting.

Men erupted into view, some on horseback and some on foot next to wagons and carts. Most of them didn’t look magical at all. They were ordinary Englishmen, and a few women as well. Their faces were streaked with mud and ash, reddened by the icy wind. They tore for the barrier, for safety.

At the head of this makeshift army, charging toward us on a horse, was Magnus.

A Sorrow Bright and Burning by Jessica Cluess, $12, Amazon