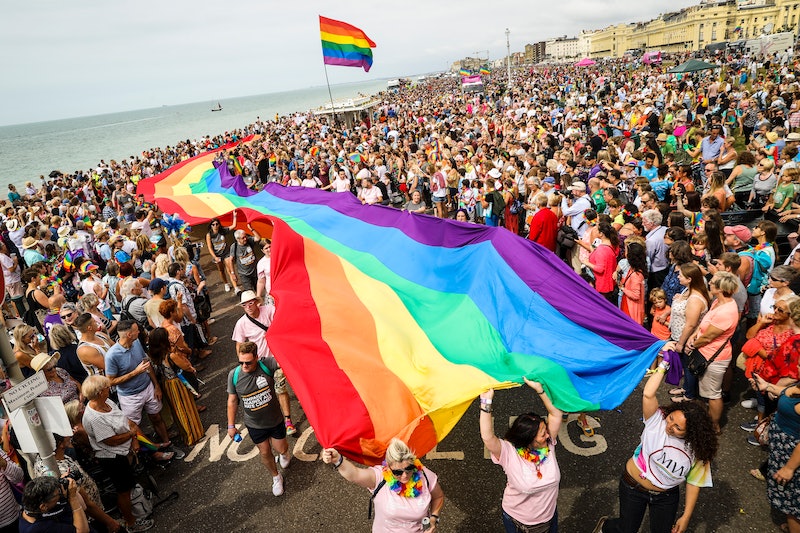 In a not-at-all-shocking turn of events, a massive genomic study of nearly half a million people has concluded that there is no "gay gene." In an effort to discover whether sexuality is determined by genetics, scientists have long been trying to discover a biological reason for queerness. And the biggest study ever in attempt to find that answer concluded that sexuality is more complex than any one "gay gene" would suggest.

The study, published in the journal Science, used data from the UK Biobank and from customers of the website 23andMe, a private genomics and biotech company. And while researchers found five loci (fixed locations on chromosomes where specific genes 'live') that have vague connections to people's reports of sexual behavior, there was no single gene that could predict a person's sexuality.

Significantly, the study noted that the younger participants were, the more likely they were to have had sexual experiences with people of different genders. This makes sense alongside a 2017 GLAAD report that showed a steady increase in young people identifying as LGBTQ. And this rise in identification as LGBTQ calls into question another fundamental question of most genetics research: how do results get interpreted, and by whom? Can you ever really know how much of a person's identity is genetic, and how much is constructed by changing social structures and labels? And does it even matter?

The study's authors were careful to address this question: "We wish to make it clear that our results overwhelmingly point toward the richness and diversity of human sexuality," they wrote. "Our results do not point toward a role for discrimination on the basis of sexual identity or attraction, nor do our results make any conclusive statements about the degree to which 'nature' and 'nurture' influence sexual preference."

This is a particularly important point, given that "nature" and "nurture" only offers two binary options for understanding the vast complexities of sexual desire and romantic attraction. In a 2016 article published in the Journal of Critical Realism, feminist critical and cultural theory researcher Dr. David Andrew Griffiths cautioned that any and all studies of genetics need to be cautious about claiming that genes can dictate human emotions and behavior. Biology does not dictate sexual desire and sexual desire does not erase biology, Griffiths wrote, following the footsteps of feminist theorists Karen Barad and Donna Haraway. Instead, biological and social realities co-create each other.

This type of co-creation is easily seen in the ways that many LGBTQ people were not included in the newest "gay gene" study. Only certain types of sexual "behavior" were taken into account, rather than looking at attraction and desire. And trans and intersex people were excluded entirely because their genders do not always match those they they were assigned at birth. The authors noted that this exclusion is regrettable because it fails to include "important persons and groups within the queer community." Yet the authors also acknowledged that this kind of exclusion "is common in genetic analyses."

These types of exclusions have historically shaped genetics research, often leading to a lack of nuance and a seeming scientific reinforcement of who deserves which rights. Because genetics as a field of study has a long legacy of influencing (and being influenced by) social and political systems of oppression.

For example, the pseudoscience of eugenics has long been used to justify white supremacy and xenophobia, through its debunked claims that certain people are genetically superior to others. And as described in a 2015 article in the journal Annual Review of Genomics and Human Genetics, the governments of the United States and Nazi Germany have a similar history of using eugenics arguments to justify the forced sterilization of disabled women of color.

And the knowledge that genetics are so often used against marginalized people has actually spurred a lot of "gay gene" research. Indeed, early "gay gene" studies conducted in the early 1990s were enmeshed in debates about whether being gay was a choice and therefore could be discriminated against as "the wrong choice," according to a PBS Frontline article on the debate.

So whether you're turning up Lady Gaga's 'it's in my genes' anthem or bemoaning a resurgence of a "gay gene" debate that you thought you'd left behind in a high school debate classroom, it's important to bear in mind the history of genetics research and identity politics. Because regardless of the ways people interpret science, your queerness is real and it's complex and it isn't going away: and really, that's a cause for celebration.