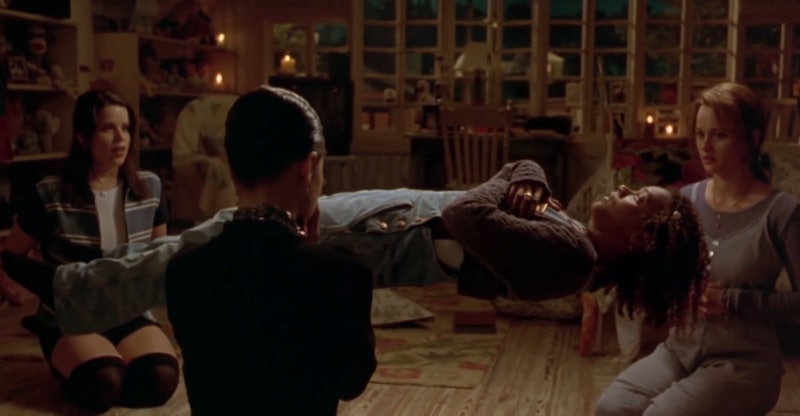 Ready for another round of light as a feather, stiff as a board? A movie remake of The Craft — the iconic 1996 witch-themed horror flick that starred Robin Tunney, Neve Campbell, Rachel True, and Fairuza Balk as outcast high school coven mates — is being resurrected and heading to the big screen once again. Per Deadline, actor Zoe Lister-Jones will be at the helm, both writing and directing the updated version.

“Dreams. Coming. True.,” Lister-Jones, who currently stars in CBS' Life in Pieces, posted on Instagram March 27, along with a screenshot of Deadline's report, appropriately adding her own witch emoji, too, naturally.

While no details have yet been revealed on how the new version of The Craft will bewitch a new generation of viewers — along with nostalgic fans hoping to relive all of the original's haunting magic — it is being hailed as a reboot, rather than a sequel. So if Lister-Jones' iteration follows the same plot as the original, People provided a refresher of what fans have to look forward to:

"The Craft revolved around new-girl Sarah, played by Robin Tunney, as she falls in with a group of outcast girls who perform witchcraft and worship a powerful deity named Manon. The three girls — played by Fairuza Balk, Neve Campbell and Rachel True in the original — encourage Sarah to tap into her supernatural side, and the foursome become a coven. But when Sarah’s crush Chris (played by Riverdale’s Skeet Ulrich) makes up a nasty rumor about her, all four girls cast spells that turn out to have dire consequences. In the end, Sarah saves herself and her town by taking away the other girls’ powers."

Over on Twitter, several users shared Hollywood's enthusiasm. "I. Am. So. Excited. #TheCraft 🤘🏻😬💀" wrote Andrea Duran, attaching a GIF from the 1996 movie.

Others even threw out some casting suggestions. When user Rebecca Theodore-Vachon tweeted that she thought Us actor Shahadi Wright Joseph would "make a bad ass witch on screen," another fan, Jaleesa Lashay Diaz, agreed and threw The Chilling Adventures of Sabrina's Tati Gabrielle's name into the mix as well. Her reasoning? "She’s already proven to be a bad ass witch, and I want more!"

Of course, there were plenty of skeptics as well. Tweeted Noah Cassiel, "Am I nuts to think that The Craft could have a sequel. A rehabilitated Nancy. A seasoned witch Sarah. No?"

Another fan, Kathryn Taylor concurred: "Hmmmmmm 🤔 The Craft was such a great 90s film and captured that decade perfectly. A sequel could be good, but not a remake please! #TheCraft"

And then there were those that fell somewhere in the middle. As one person, who encapsulated that feeling of being on the fence, tweeted:

Me: I don’t understand why people get so upset about reboots.

Despite the mixed opinions, Lister-Jones will surely work some movie magic on The Craft that will make it all her own.