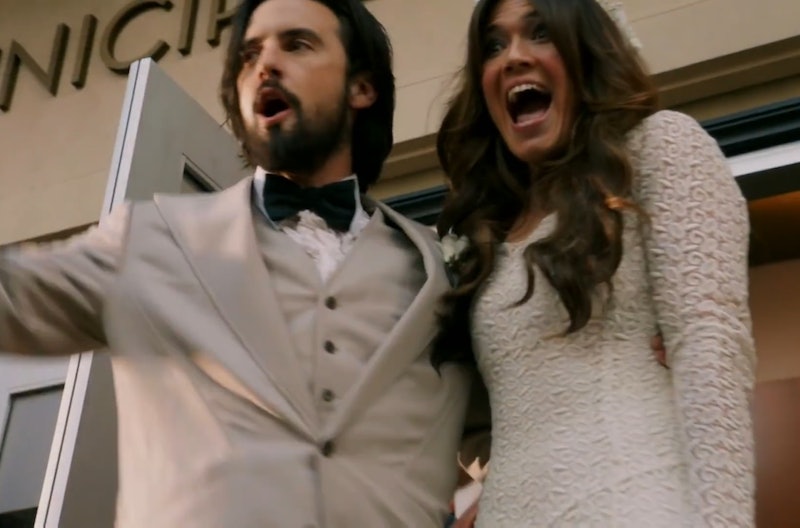 For a couple known for their grand romantic gestures, Jack & Rebecca Pearson getting married at City Hall understandably raised some eyebrows back during Season 1. Now, Mandy Moore is revealing new This Is Us Season 4 details — and admitting she has the same questions as you do.

“The very first season we saw that they had like a courthouse wedding and we saw the end of it, but I, too, am curious as to what the lead up is,” Moore, who plays Rebecca, told TheWrap in an interview published on Aug. 14. “I’m really interested in their courtship, like, how they sort of find themselves getting engaged and then a wedding, and all of that I feel like is so ripe for exploring."

According to Moore, fans may just get their answer after the NBC family drama returns on Sept. 24. "I do know that we’re going to start to get deeper into that time period, specifically when Jack and Rebecca make it back to Pittsburgh from their California road trip," she added. "And him meeting my parents and specifically my father. And my father plays a bigger role in our relationship moving forward.”

Indeed, when Entertainment Weekly revealed some This Is Us Season 4 first-look photos on Aug. 15, the first one showed Jack (Milo Ventimiglia) all suited up to meet Rebecca's parents. Will their reluctance to accept Jack be the reason behind the low-budget nuptials? “There are going to be some family dynamics that enter the equation from my side, having to contend with my parents and their thoughts on him,” Moore elaborated to EW.

Back in March, This Is Us creator Dan Fogelman previously teased that Rebecca's father is going to become a prominent part of the show" in Season 4. While fans have already met Rebecca's overbearing mother, Janet (played by Elizabeth Perkins), the Malone family patriarch has largely remained a mystery thus far. “Our world is going to expand a little bit in a really interesting way,” Fogelman told EW. “Where we’re starting the season is as ambitious as we’ve been in a storytelling way.”

A tight-lipped Ventimiglia echoed those sentiments during an Aug. 7 Watch What Happens Live with Andy Cohen after show clip. After a caller asked the actor to spill the tea on the This Is Us Season 4 premiere twist, all Ventimiglia would say is that "the world expands."

Sure, that could have something to do with Rebecca's father, but, the Pearson universe will grow in other — more mysterious — ways as well. On Tuesday, June 18, TVLine reported that Jennifer Morrison will join This Is Us as a yet-to-be-revealed character this year. According to the website, her mystery role is "substantial," and Entertainment Weekly confirmed that Morrison will be in multiple episodes. As of now, the leading theory is that Morrison will play Kevin's love interest, as well that the mother of the son that fans met in the Season 3 This Is Us finale.

Another finale reveal, of course, was that Rebecca is the enigmatic "her" Randall (Sterling K. Brown) had cryptically referred to — and future Rebecca doesn't seem to be doing so well. As for when fans should have their tissues handy (read: always) to find out Rebecca's fate, Moore explained that there's plenty of story left.

“I would tell people to sort of take a beat and recognize that we are fortunate enough to have been picked up for three more seasons, so we have some time to tell the story,” she told TheWrap of Rebecca's mystery illness. “I think we sort of consider ourselves kind of at like the intermission, we’re at the halfway point now. So we’ve done 54 and ostensibly we have 54 ahead of us, so I don’t think that Rebecca is necessarily a timeline that we’re going to visit super often."

Even with more than a month to go before This Is Us returns, fans already have plenty of clues to whet their TV-loving appetites.