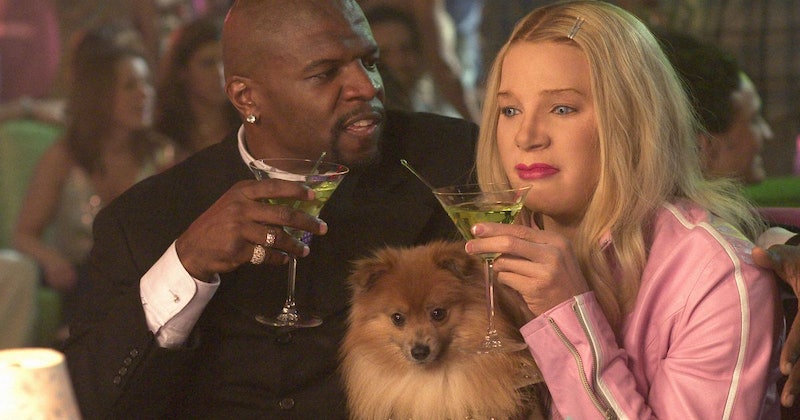 Fifteen years ago, director Keenen Ivory Wayans needed a song that would become a running joke in his movie White Chicks. For the gag to work, it had to be a song that two FBI agents (played by Shawn and Marlon Wayans) probably wouldn't know, but two Hilton-esque blonde heiresses (their undercover personas) would have memorized by heart. "What I was looking for was a female anthem," Keenen Ivory Wayans tells Bustle over email, "and also a song that no man, especially a black man, would know the lyrics to." As soon as Wayans heard the twinkling piano intro of Vanessa Carlton's "A Thousand Miles," he knew that was the song.

And now, on the controversial comedy's 15th anniversary, "A Thousand Miles" is the most memorable part of White Chicks. But what's truly ironic is that we remember Terry Crews singing along to every word of the presumed "white girl" anthem that makes it so unforgettable all these years later.

While Wayans hadn't heard Carlton's 2002 song prior, which was already a huge hit before filming, Crews was very familiar with it. "I remember getting feels every time I heard the opening piano!" Crews writes over email about the first time he heard Carlton's sweet piano jam-turned-full-on orchestral-singalong. "Something about it just makes you feel happy, like you have a crush on someone and you just found out they have a crush on you! All. The. Feels."

It's a familiar reaction to how Crews' character Latrell Spencer feels when Marlon's undercover alter-ego plays it for him as they head out on their first date. With a delighted, "How did you know? I love this song," Latrell falls a little more in love with the fake heiress, who was hoping the song would be a major turnoff.

Crews' memorable dance moves from the scene — the head shakes to the violins, the pretend walking, the pointing to his watch — were all moves he came up with after a nap. "I had heard the song so many times I knew it by heart. Now I was just feeling it," he writes about the filming. "I can tell you I actually fell in love with Marlon a little bit!" That scene, more importantly, gave him an opportunity to play against type and break down a stereotype of black men, something he continues to do with other roles like Brooklyn Nine-Nine's gentle giant Sergeant Terry Jeffords.

"To have a very large intimidating black man whom stereotypically, would have very violent, misogynistic type music on repeat, but in reality is very in touch with his sweet, gentle feelings," Crews writes, was a bold statement at the time. "I’m proud of the fact Keenen, Shawn and Marlon knew exactly what they were doing— and to be a part of changing how we are seen — it’s an honor."

That's how Wayans feels about Carlton, who will make her Broadway debut in the Carole King musical Beautiful this month, letting them use her song, which has become such an important part of the movie. ("She thought it was funny," Wayans says of why Carlton agreed.) In fact, he thinks the two are forever linked.

'A Thousand Miles' is a part of me now, and I don’t regret it one bit.

"I think every time you hear the song you think of the movie, and every time you watch the movie you can’t wait to hear the song," Wayans writes. "I still love it as much as when I first heard it and I am grateful to Vanessa for allowing us to have fun together and create a piece of comedy history."

Crews also has a special place in his heart for "A Thousand Miles," which fans often ask him to perform. Sometimes, he gives the people what they want, like when he showed up to Lip Sync Battle in 2015 with ribbon dancers in tow to perform "White Chicks One And A Half."

"I love the song and Vanessa Carlton for creating it. In a lot of ways— it’s inseparable from me," he writes. "The power that music has to bring emotion [to its listeners] is so special. It can tether you to places, memories and images. 'A Thousand Miles' is a part of me now, and I don’t regret it one bit." Those who still copy Crews' moves every time they hear those violins probably don't either.