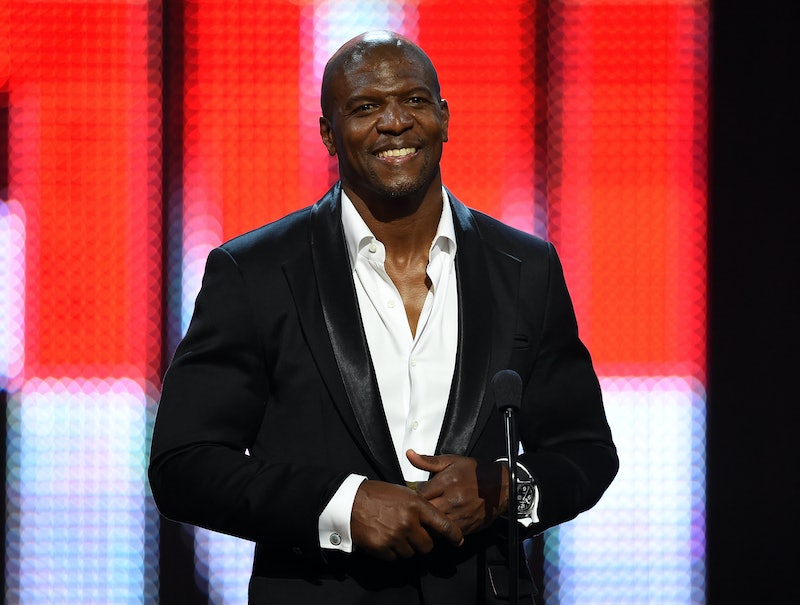 After being brave enough to say #MeToo, Terry Crews has been included in the list of 35 women and men who are collectively TIME's Person of The Year for 2017. Dubbed "The Silence Breakers," Crews, who accused talent agent Adam Venit of sexual assault, isn't afraid to speak up. (Venit has not publicly commented on the allegations; Bustle reached out for comment, but did not receive an immediate response.) Crews' advice to men on how to stop sexual misconduct may also be the key to making sure this movement sparks real change.

Back in October, Crews revealed his own sexual assault story in a series of tweets after decades of sexual harassment allegations against Harvey Weinstein were revealed in a New York Times report. (Weinstein's rep previously denied all allegations of nonconsensual sex in a statement to the New York Times). He was inspired by those women who were brave enough to speak out, despite knowing the consequences they could face, like losing their jobs.

But, Crews didn't just speak up, he took action. He's currently suing Venit for groping him in front of his wife at a Hollywood party in 2016. (According to TIME, Venit declined to comment for the story, but his agency William Morris Endeavor, which is named in Crews' lawsuit, has suspended him.) And now, Crews wants other men to take action, even offering them some advice on how they could stop the sexual harassment and assault problem. It's so "simple," he claims, that it shouldn't even have to be said.

"Until men stand up and say, 'This harassment, this abuse, these assaults are wrong,' nothing will change. And it's so simple, it's almost laughable. It's one of those things where, hey man, if you are making anybody uncomfortable, don't do that."

That last line has Crews raising his voice to make the point that male support is necessary to changing the culture, but if there's going to be any real change, men have to examine their own behavior. "It's not that hard," he said, addressing his fellow men. "Just if you're making anyone uncomfortable in any way — man, woman, child — stop. You're already over the line."

What men need to know, Crews told TIME, is that "you cannot treat people like they are less than human, you can't. And that's the essence of this whole thing." To impose your power on someone else does not make you powerful, it makes you a predator. "When you treat people that way," Crews said, "it comes back on you." That is clear by the many powerful men who have been taken down by allegations of sexual misconduct this year including Louis C.K., who admitted to the allegations, which include masturbating in front of women, were true. It's a list that with each day seems to be getting longer with last week including the firing of Today host Matt Lauer, who was accused of sexual misconduct. (In a statement, Lauer apologized saying, "Some of what is being said about me is untrue or mischaracterized, but there is enough truth in these stories to make me feel embarrassed and ashamed.")

While this is certainly a watershed moment, Crews' words make it clear he doesn't want to see this moment pass without seeing real systemic change. It's easier said than done, and Crews knows this firsthand.

After coming forward with his sexual assault allegations, Crews told TIME that people questioned why he didn't beat Venit up. It's something that surprised the former football player, as he told the magazine:

Crews has made that the focus of his own case, shutting down anyone who tries to blame him for what happened. Recently, Crews called out Russell Simmons, who has been accused of sexual assault by multiple women including screenwriter Jenny Lumet. After the accusation, Simmons stepped downs from his company, Rush Communications, and apologized in a statement to The Hollywood Reporter:

"While her memory of that evening is very different from mine, it is now clear to me that her feelings of fear and intimidation are real. While I have never been violent, I have been thoughtless and insensitive in some of my relationships over many decades and I sincerely and humbly apologize."

Crews tweeted an email sent to him by Simmons, which asked him to give Venit a "pass" for what he had done and drop his case. "Dear @UncleRUSH," Crews tweeted. "NO ONE GETS A PASS."

Crews continues to take that hard stand on the issue, telling TIME, "I always have felt women have been able to take care of themselves, 100%. But men need to hold other men accountable." Crews will continue to make sure men are held accountable for the things they say and do. His hope is that others will follow his lead and his advice, after all, it's so simple to do so.