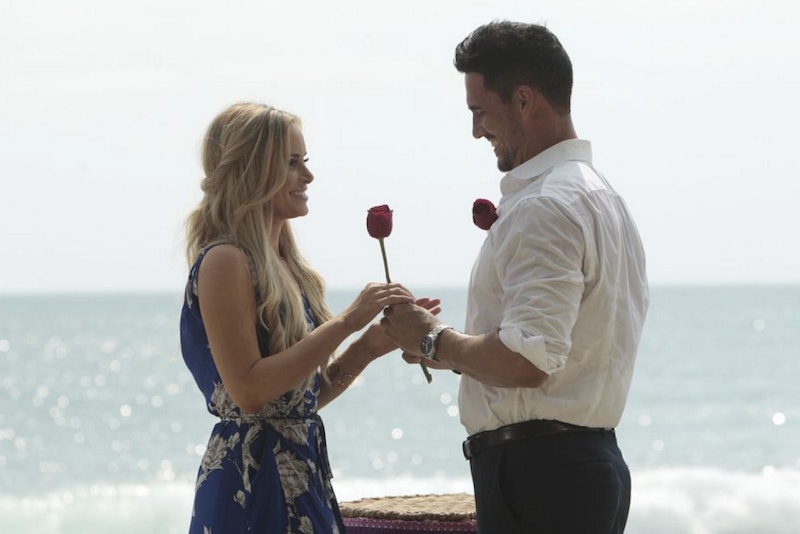 Relationships borne of The Bachelor franchise are usually very messy, but one of the more recent breakups might take the cake in that department. This week, serious drama surfaced when news broke that Josh Murray reportedly called the police on Amanda Stanton while trying to get back a car he'd given her as a gift while they were still together. It's unclear what exactly happened, since both sides' stories are different, and whether or not they ever actually dating again after their first breakup is pretty blurry, too. This former Bachelor in Paradise couple may always be crazy confusing, but hopefully, this timeline of Amanda and Josh's relationship will help.

Of course, it's hard to make too many observations about things between them just from Instagram and Twitter, but being that both Amanda and Josh have been a bit outspoken about what they've been through together, it does give us a little more to go on. And after seeing them meet and fall in love on BiP, it's hard not to be curious about what happened when the cameras turned off.

So where do Josh and Amanda stand today? Did they ever actually get back together? This timeline might help answer your questions.

Fate and Chris Harrison brought these two together when they both happened to be on Bachelor in Paradise at the same time. It had been more than a year since Josh's relationship with Bachelorette Andi Dorfman had ended, and Amanda seemed fine moving on from Ben Higgins after The Bachelor. Amanda received a lot of criticism from her friends and fellow cast mates for getting so close to Josh so fast, but in the end, it didn't matter because they left paradise together.

No sooner than the BiP finale aired did Josh and Amanda officially confirm that they'd started cohabiting. Josh moved across the country from Georgia to California to live with Amanda and her two daughters, and before long, they were spotted out and about as a group... with gratuitous Instagram posts about how happy they were.

While talking to Us Weekly, Josh confirmed that he and Amanda had split right after the holidays. In a statement to the mag, he said,

"We have similar things we want in life, but we are also very different on other important things as well. I will always love her and the little ones, they held a special place in my heart. I hope everyone can respect our relationship and just pray for our happiness in the future. I will always wish nothing but the best for her, she deserves it."

As originally reported by Entertainment Tonight, Josh and Amanda were seen kissing and spending time together in LA. At that point, it really seemed like a reunion was imminent, but the future had other plans for them.

While talking to Us Weekly, Josh said that his relationship with Amanda was "complicated" but that they seemed to be working things out... as far as he was concerned, anyway. He said:

At the same time, Amanda pointed out on Twitter that she hadn't said a word about whether or not they were back together, which definitely seemed a bit suspicious.

On March 20, Josh reportedly called the police to help retrieve an Audi he'd bought for Amanda. According to Amanda, she'd already agreed to give the car back and a police presence wasn't necessary, but Josh's assistant, Hayley Watts, seemed to think otherwise, and she and Amanda both gave interviews about it telling their side of the story. Bustle reached out to Josh for comment, but has not yet received a response.

Ideally, the story would end here, and these two would cut their losses and move on. Will that actually happen? I'm not convinced. Here's to Bachelor drama, y'all. Isn't that why we all love this franchise so much in the first place?