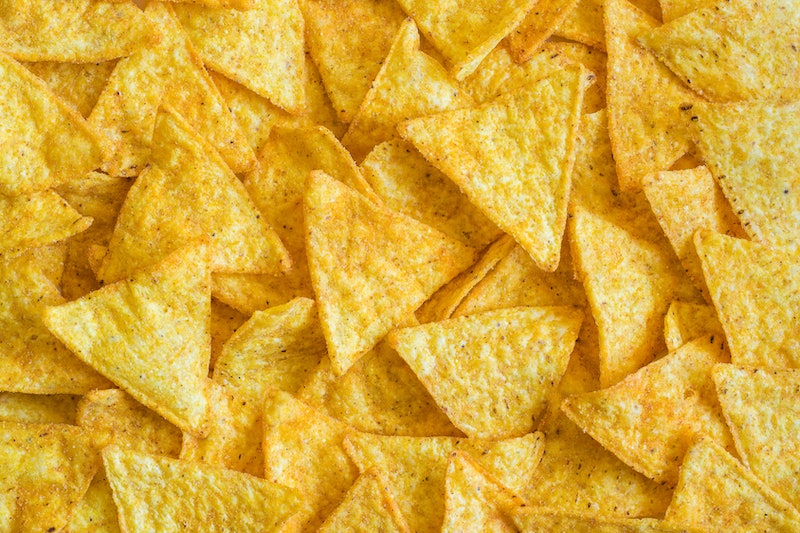 In news that has sent me into an emotional tailspin this morning, I'm finding out my salty snack obsession could be threatened. Several brands of tortilla chips have been recalled by Utz Quality Foods, after the company learned they could possibly contain a milk allergen that wasn't disclosed on the nutrition label, reports the U.S. Food & Drug Administration. The brands include Golden Flake, Good Health, Utz, and Weis, so basically, I guess I'll just stop eating tortilla chips all together, then?

Today.com reports Target, Publix, and Kroger were three stores which sold the bags and all announced warnings on their respective websites. The stores also provided the affected date codes, so you can check if you bought a bag that might not be safe. In addition, the FDA provided a complete chart containing item descriptions, UPC codes, and expiration dates.

Thankfully, no illnesses have been reported yet, and most of us are probably safe. Plus, Today.com points out, the chips were sold in only 32 states — including Arizona, Florida, Maryland, New York, and Texas — meaning many of us never even got our hands on a bag. If you did, however, and if you have some kind of allergy or severe sensitivity to dairy, you might want to stick to pretzels for now.

The FDA says if you purchased an affected bag, you can either chuck it, or return it for a full refund or exchange.

The food industry has had a rough go of it lately. You probably remember the recent romaine lettuce recall due to an E. coli outbreak. According to the Centers for Disease Control and Prevention, the lettuce came from Yuma, Arizona. They originally reported 121 infected people across 25 states, including 52 hospitalizations, 14 with some type of kidney failure, and one death in California. In a more recent update from May 2, 23 more people were reported sick, and three more states were added to the list.

You might want to exercise caution with your breakfast sausage, as well. On May 5, Food Safety News reported from the U.S. Department of Agriculture's Food Safety and Inspection Service that nearly 25 tons of smoked sausage were recalled due to possible contamination of foreign matter — more specifically, hard plastic. The sausage was shipped to locations in California, Georgia, Illinois, New Mexico, Oklahoma, and Texas. Fortunately, there have been no reports of illness, but if you think you might've purchased contaminated goods, you can see if your purchase is listed on Food Safety News.

Maybe we should all be vegetarians?...

An additional 17.7 tons of beef were recalled for the same reason — plastic — says Food Safety News, and we're starting to see a pattern. Indeed, the Stericycle Recall Index reports foreign material is the leading cause of recalled FDA units — a conclusion they came to after five years of tracking product recalls. While the number of FDA recalls saw a small dip as of late (eight percent), the number of food units pulled off shelves jumped by six percent. On top of that, the total pounds of recalled meat being monitored by the USDA increased by a massive 69 percent — passing the one million pound-mark.

Are you terrified yet?

All of this isn't meant to scare you out of eating your favorite foods. In fact, in one way, the increasing number of recalls is almost reassuring: it means we're becoming more aware and vigilant as consumers. We can't control our food and the conditions under which it's produced, shipped, and served 100 percent — not even close. The best we can do is aim to purchase high-quality food from trustworthy sources, and immediately report any concerning experiences.