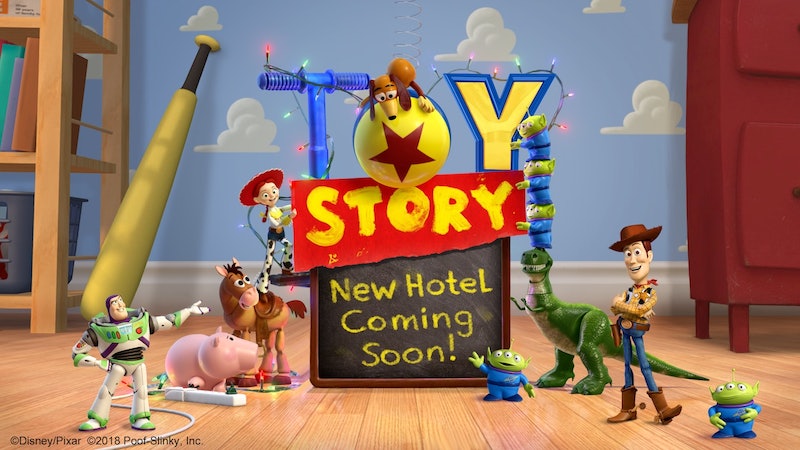 Did you think that Toy Story Land at Walt Disney World and Toy Story 4 were the only new ventures starring Woody, Buzz, Jessie, and all their pals that Disney had up its sleeve? Think again — because the company just announced that a Toy Story hotel is coming to Tokyo Disney within the next few years. It’s certainly turning out to be a banner year for the long-running Disney Pixar property, is it not? Not bad for a franchise that just celebrated its 23rd birthday. (The original Toy Story movie was released on Nov. 22, 1995. Related: Wow, do I feel old.)

The Tokyo Disney Toy Story-themed hotel will be the second such accommodation to have opened its doors on Disney property. On June 16, 2016, Shanghai Disney opened its gates to the public — and along with the park opening, two themed resort hotels began welcoming guests, too: The Shanghai Disneyland Hotel and the Toy Story Hotel. The former is described in a post announcing the opening on the Walt Disney Company’s website as “an elegant Art Nouveau-inspired resort with a touch of Disney magic and imagination,” while the latter is said to “[immerse] guests in a world inspired by the toys from the Disney Pixar series of Toy Story animated films.”

Tokyo Disney’s Toy Story hotel, which has yet to be officially named, sounds like it will have similar aims. According to a press release from Oriental Land Co., Ltd., which owns and operates Tokyo Disney, the backstory of the hotel involves Andy “[embarking] on the ultimate backyard project: a building to house all his toys.” However, Andy has been called away by his mom, thereby enabling the toys to “take over the ‘toy’ tower and open it as a hotel for all the ‘honorary’ toys of the world.” (Sounds a bit like the premise for Toy Story Land in both Shanghai Disney and Walt Disney World, doesn’t it?) Its planned opening is set for the 2021 fiscal year, so it could start welcoming guests anytime between April 1, 2021 and March 31, 2022.

As for what kinds of features the Tokyo Disney Toy Story hotel will have? Details are sparse right now, but we do know a little about what’s planned. According to the Disney Parks Blog, “guests will enjoy a world where everything looks like it’s made of toys” — “everything” covering “the hotel exterior to the spacious gardens.” The rooms, of which there will be about 600, will take their inspiration from Andy’s bedroom; “colorful furniture” and “other immersive features” plucked from the Toy Story universe will fill the spaces, and characters like Woody and Buzz will make appearances. Shopping and dining options will also be available.

(Those dining options won't necessarily include Pizza Planet, but I'd consider it a missed opportunity if they don't.)

All of that is pretty broad, though. But even if we technically just have to wait and see to find out more, we can look to Shanghai Disney’s version of the hotel to get a better idea of what might be in store. Photos from the hotel’s page on the Shanghai Disney website show bright, colorful rooms adorned with Andy’s signature cloud wallpaper, bedspreads and shower curtains emblazoned with Toy Story’s playful cast of characters, and fun details like bedside tables designed to look like Rubik’s cubes.

According to The Points Guy’s November 2017 review of the hotel, the lobby and public areas are similarly colorful, and the familiar Toy Story font is on display on many signs throughout the property. Karen Bee’s video tour of the hotel gives you a good look at its public spaces and amenities:

Rooms at the Shanghai Disney Toy Story Hotel start at ¥850 per night, or about $125. That’s about in line with the rates for Walt Disney World’s “Value” resorts; prices for the three All-Star hotels start at $99 per night, while Pop Century and Art of Animation begin at $116 and $136, respectively. Additionally, the hotel is usually described as “family-friendly” — typically a phrase reserved for the less pricey Disney resorts. (The Shanghai Disneyland Hotel, meanwhile, gets descriptors like “elegant” and “posh.” Rooms there start at ¥1650 per night, or around $242 — nearly twice the cost of a night at the Toy Story Hotel.) The Points Guy did note that the hotel won’t give you a “super luxurious experience” — the dining options in particular were a bit of a letdown, consisting of a deli and a buffet, but no formal sit-down restaurants — but that “if you and your family want to bring back fond memories of Buzz and Woody — and create new ones — this is a great option.”

It’s worth remembering that the Shanghai and Tokyo versions of the Toy Story hotel might not ultimately be identical; indeed, we already know that the structure of the buildings will be somewhat different: Shanghai Disney’s hotel has 800 rooms spread out over five floors, while the Tokyo Disney version will have fewer rooms (600) and more floors (11). However, given Disney’s tendency to take ideas that originated at one park and adapt them for a different one (looking at you, Remy’s Ratatouille Adventure) it’s likely the two spots will have at least a few things in common.

More is sure to come, so stay tuned!