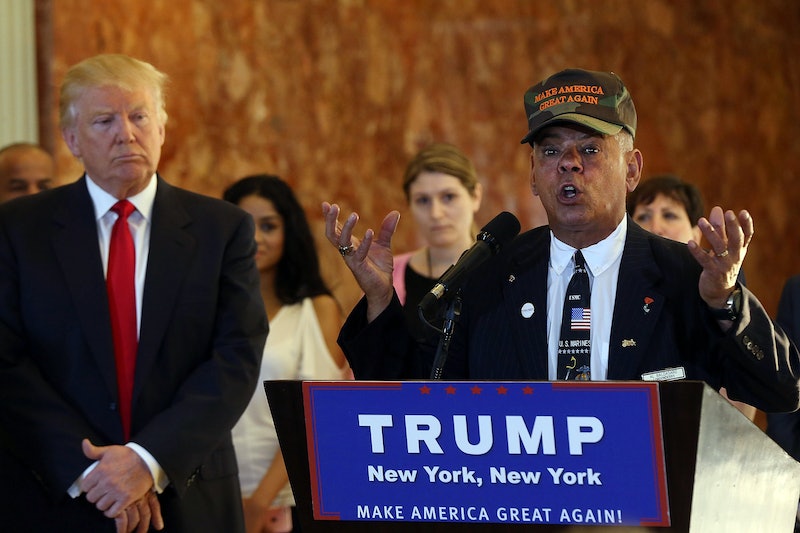 Since the shooting of GOP Louisiana representative Steve Scalise, many elected officials, Republicans in particular, have called for a reduction in the heat and vitriol of America's political rhetoric. Which is why someone spotted at a White House bill signing on Friday is raising some eyebrows: Al Baldasaro, a Trump campaign adviser who called for Hillary Clinton's killing during a radio interview last year, was in attendance for the signing of the Accountability and Whistleblower Protection Act.

During an interview with a right-wing radio host last summer, Baldasaro, a New Hampshire state lawmaker, commented on Clinton's handling of the attack on the U.S. compound in Benghazi, Libya, and her private email controversy. He said:

Hillary Clinton to me, is the Jane Fonda of the Vietnam. She is a disgrace, for the lies that she told those mothers about their children that got killed in Benghazi ... this whole thing disgusts me. Hillary Clinton should be put in the firing line and shot for treason.

Baldasaro's presence at the White House raised alarm bells among observers who noted his comments on Clinton last year. When asked about his invite, press secretary Sean Spicer said at the Friday briefing that he was not aware of Baldasaro's comments, and pushed back on violent rhetoric.

"I don’t believe, and the president has said this as well, that anybody that goes out and tries to highlight those kinds of actions, should not be welcome,” Spicer said. “I’m not aware of the comments [Baldasaro] made, but again, I’ll say it right now, I don’t think we should be resorting that kind of language with anyone in our country."

Baldasaro was reportedly investigated by the Secret Service for his remarks last year, a standard response that was also taken against comedian Kathy Griffin for her violent anti-Trump photo shoot last month. Baldasaro, however, refused to apologize for his remarks, reportedly telling The Boston Globe in the following days that he "without a doubt" stood by his call for Clinton's killing.

When questioned about one of his most visible endorsers calling for violence against his opponent, then-candidate Trump denied having heard the remarks, and called Baldasaro "a very fine person." By contrast, longtime Trump spokesperson Hope Hicks distanced the campaign from Baldasaro's violent remark, telling NBC News Trump didn't share Baldasaro's views.

"Of course Mr. Trump does not feel this way," Hicks said.

Baldasaro is not the only person who's endorsed violence against high-profile Democrats and still been received by the Trump White House. Rocker Ted Nugent was also invited into the Oval Office in April, despite having proclaimed in 2012 that President Barack Obama should "suck on [his] machine gun." In the aftermath of the GOP baseball shooting, Nugent renounced his previous statements and called for more civility in the political discourse, but that was months after he was welcomed into the Oval Office by Trump, who also defended him during the initial controversy.