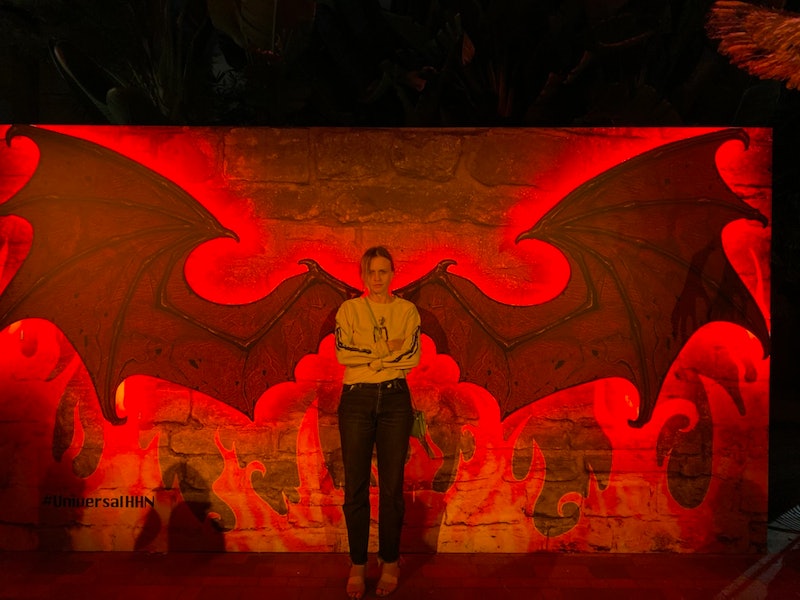 “People were murdered for it for so long,” Melinda Lee Holm tells me, when I ask her about the history of witchcraft — a term, she says, that was first used to condemn people legally for practicing their traditional magic and spiritual rituals. "There's an inherent heaviness to the term of which I don't think most people are aware."

She doesn't use "witchcraft" to describe the work she does for this reason — historically it has been delegitimized at best, hunted and persecuted at worst. And despite the social media popularity and consumer-driven approach to all things considered "woo-woo" or "witchy"— traditions of magick, divination, and spell-casting are ancient and deeply rooted. The skepticism and cliché people assign to it are byproducts of a very old prejudice. Holm is a Priestess of Tarot, and calls her work magick, the "k" at the end differentiating it as a practical practice, rather than a method of illusion.

Personally, I came to Holm to try magick on a few of my issues, and she was recommended by a woman, a witch, I met at a writing tutor volunteer training.

I've tried many things when it comes to healing or personal problem solving, but never have I been guided to cast a spell. The idea always appealed to me because of how inherently empowering it seemed. My understanding of a spell is that you identify your problem, then go through a particular set of tasks, or expressions of intention, as a petition to get help from some greater forces.

But really, magick is not something I know much about yet.

"Magic(k) and spell-casting are, at their core, simply working in collaboration with the natural and spiritual worlds to make changes," Holm tells Bustle. She likens certain aspects of it to religious ritual. Prayer is a form of spell-casting or incantation, she says. It's all about saying words with a the intention of causing change in your life or environment.

”[Magick] is rooted in this human lineage of collaborating with the Earth and the heavens to create your life," Holm says. As far as how it works, Holm says she isn't totally sure. Just that she knows it does.

My original plan was to go to Holm to attack one of two areas with the help of spells: First, my struggles with intimacy, and second, needing to make more cash. Romance and finance are, as Holm says, the big ones when it comes to seeking magickal intervention.

But when I knocked on the door of Holm's extremely purple house, I had no real plan. I was at a loss, in large part because I just moved to LA— and while pleased to be in a new place — I was mostly sleeping on my aunt's couch. After living in the same apartment in New York for seven years, searching for a new home in a new city had me feeling like a hatching baby crow. To add to that, I was going through a difficult time emotionally.

But Holm was not shaken by my overarching befuddlement. Her demeanor was kind and grounded. She also had a small poofy dog, and an exceptional Carvaggio-esque portrait of her and her partner hanging on the wall. Her home was her office, and it felt well-lived in, special, safe. The round table we sat down at had a tarot deck already spread out. There were gems, candles, mirrors, and trinkets all around. She got out her tarot deck.

"Let's just start with a lay of the land spread," Holm says. I told her I was nervous about what we might find, that perhaps I had made some wrong moves in coming here, and the cards would show doom in the coming days.

"Here’s the thing about reading tarot," Holm says. "I don't predict the future. I read it to guide people with where they are right now."

The cards represent the current state of things, and she interprets them in accordance with their traditional symbolic meanings. From there, she gives actionable spells and tools that can help with whatever comes up.

She assured me I could tell her as much or as little about what was happening for me as I want, and as a compulsive confessor, I did a quick deep share about current conflicts as well as my past.

When she did the first spread, the cards showed me at an emotional place of newness, and what was ahead of me had a lot to do with homemaking and creating a space for myself. However, I am being blocked, if not ruled, by negativity, doubt, and mental chaos.

"For a key card, which is the energy you hold as your true north, you have the Page of Pentacles. And Pages are the total novice," Holm says. But what was hanging above me, so to speak, was the Devil.

Each day, place a small stone before a tea candle, light it, and let it burn all the way out on its own.

We do two more spreads — one that focuses specifically on my apartment hunt, and the other around a particular interpersonal issue that's been driving me bonkers, one that I can't stop thinking about.

I won't go too far into each reading, but the cards showed a newness and "ready" energy to move forward in all of them, as well as a continuous thread that prevented me from feeling settled.

"You'll begin to dismantle those doubts and move forward," Holm says. "But maybe not in the ways you expect."

Holm gave me an assignment — a spell to start on the beginning of the full moon to do for seven days.

She told me that for each day, to place a small stone before a tea candle, light it, and let it burn all the way out on its own. Then take a moment in meditation, to say and trust that the flame is burning away my doubts and internal barriers, and igniting my growth. On the last day I had to bring the stone out into nature.

"When you feel you are truly present, give one final energetic push of anything you are ready to release into the stone," she told me. "Then, give it to Earth to transmute that energy. Throw it in the ocean, bury in in the ground, drop it in a stream. Feel your relationship with nature and give thanks for it. Take as long as you like before heading back out."

She told me not to overthink any of the process, and assured me that if I participate in the rituals of magick and do the spells, there is another energy that takes care of what needs taking care of. This felt both relieving about the process, and difficult to trust.

I was quite committed to seeing it through, but another voice doubted these little lights and a rock were a match for my existential ennui and accompanying daily struggles. I wondered if I was doing it with enough clarity or conviction.

I began right away. I got some tea candles from the Dollar General as well as a little tea candle stand. I was quite committed to seeing it through, but another voice doubted these little lights and a rock were a match for my existential ennui and accompanying daily struggles. I wondered if I was doing it with enough clarity or conviction.

One day, unsure if I had to be around the flame the whole time as it burned, I tried to bring the candle out to the pool at my aunt’s condo, but it blew out and had to relight it. One night I did my ritual as a Hallmark movie was playing in the background, realizing that the altar I was using was probably too messy.

The whole process seemed to be touched by the same frenetic energy I was trying to burn away. But at the same time, the ritual felt good. It felt grounding and powerful.

On the last day, I went out to the park by my aunt's house around midnight. I took off my shoes, I spoke out to the moon, and I buried the stone. Some teens smoked a doob not far from where I was. Such is the nature of a public lawn after hours.

"Well," I said to myself, not feeling much different after rather fervently petitioning to the Earth. "I guess that's that."

A little over a month later, I went to see Holm again. I wanted to follow up with her and yes, to continue with more magick. Things had transpired in all of the areas we discussed, and like she said, in ways I wasn't expecting. While I was thinking that the spell "working" would mean I felt totally unblocked and liberated from my struggles, instead, important developments were made. Fairly rapidly.

I happened to get a lead on an apartment the day after we saw each other, one that ended up working out, and spent much of the past few weeks creating my new little nest. I started more work and began to feel more stable. And as for the personal issue that was '"driving me bonkers" — it sort of got worse. So much so that I sought out some new kinds of help for it. Not fun, but necessary.

After she did another tarot reading for me, Holm sent me off with a rock of Rose Quartz and a spell to start on the new moon in Scorpio.

While yes, I am a novice here, my forays into magick feel like awakening a sense of agency that I crave and feel called towards. I am going to stick with it and pursue it further.

When I came back from my second session with Holm, I told my aunt how magick felt like it was resonating with me.

"I think I might be a witch," I told her, in earnest, as we watched CSI.

"My niece, the witch," she said, nodding, eyes on the screen. "Well. You know you are a little spooky."