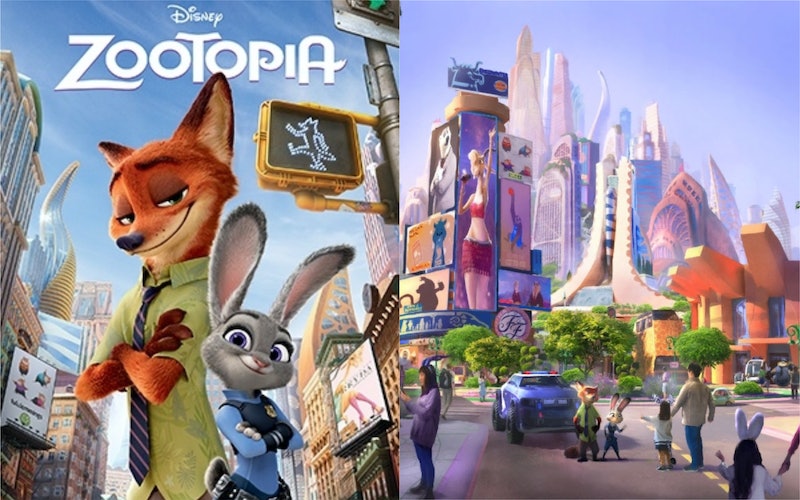 If you, like a certain rabbit I could name, have always dreamed of becoming a police officer in a bustling city populated by a huge variety of animal creatures, excellent news: You’ll get the chance to live those dreams at a Disney park in the not-too-distant future. A Zootopia land is coming to Shanghai Disneyland in China, according to an announcement from Disney itself, with construction scheduled to begin later this year. Get ready to crack some cases with Judy Hopps!

The Shanghai Disneyland park at the Shanghai Disney Resort is currently home to seven themed lands. Announced by Disney on Jan. 22, the Zootopia land will be the park’s eighth land, as well as the second based on a specific movie (Shanghai Disneyland’s version of Toy Story Land, which also exists at Disneyland Paris, Disneyland Hong Kong, and Walt Disney World, opened in April of 2018). Notably, it will also be the very first Zootopia land built at any of Disney’s park, making it quite a big deal, indeed. Zootopia became a massive success both domestically and worldwide when it was released in 2016 — in addition to being the fourth top earner globally at the box office that year, it took home a slew of awards, including the Oscar for Best Animated Feature — so it’s possible that if this first Zootopia land is a hit, other versions at other Disney parks could follow.

For the curious, here's the concept art for Shanghai; the final design might change, but it gives us a basic idea of what we might be able to expect from it:

According to the Disney Parks Blog’s announcement of the land, it will allow visitors to “experience the mammalian metropolis of Zootopia ‘where anyone can be anything.’” Characters like Judy Hopps and Nick Wilde will make appearances, as will plenty of entertainment, merch, and food and drinks — and, perhaps most notably, there will be “a new major attraction that will seamlessly blend Disney storytelling and state-of-the-art technology to bring this fan-favorite movie and its characters to life.” It’s not clear exactly what that ride will be yet, although according to Orlando Weekly, some have theorized that it might use either an updated version of the ride system that powers Pandora’s Flight of Passage at Disney World’s Animal Kingdom or something similar to the “2 ½-D” projection mapping that the upcoming Hollywood Studios ride Mickey and Minnie’s Runaway Railway will use.

The Shanghai Disney Resort officially opened to the public to much fanfare on June 16, 2016. The first new Disney resort to be built since Hong Kong Disneyland, which began welcoming guests in 2005, its opening day features included two hotels, a shopping and entertainment district called Disneytown, and, of course, the Shanghai Disneyland park.

Shanghai Disneyland differs from the other Disney parks in several key ways, particularly in the approach the company took in building an international park. Whereas Disneyland Paris and Hong Kong Disneyland both ape the layout of the original Disneyland Park in Anaheim, Calif. and the Magic Kingdom at Disney World in Orlando, Fla. — that is, they recreate the structure of the American parks in international locations, with mixed results — Shanghai Disneyland was designed to be “authentically Disney and distinctly Chinese,” as Bob Iger, CEO of the Walt Disney Company, put it prior to the resort’s opening, according to the South China Morning Post.

Main Street U.S.A. has accordingly been replaced by Mickey Avenue, which introduces visitors to Disney’s classic characters; instead of the spoked hub at the center of the park leading to each of its themed lands, there are the Gardens of Imagination, which are designed as Chinese zodiac gardens; and the lands themselves, of which there are currently seven, have been adjusted to better suit their surroundings: For example, there’s no Frontierland; instead, there’s the pirate-themed Treasure Cove. Adventureland, meanwhile, has become Adventure Isle and focuses no on pirates (which are usually a big part of Adventureland’s theming), but on travel and exploration — think Tarzan, Indiana Jones, and the Society of Explorers and Adventurers narrative all the Disney parks have been running with lately.

Construction on the Zootopia land is slated to begin later in 2019, per the Disney Parks Blog, although it’s anyone’s guess when the area will finally open. Shanghai Disneyland’s Toy Story Land took almost two years to construct, though — it broke ground in November of 2016 and opened in April of 2018 — so it’s not unreasonable to assume that the Zootopia land will take roughly the same amount of time to build. My guess is that we can expect to see it open sometime in 2021.

One thing’s for sure, though: This likely won’t be the last expansion we see at the Shanghai Disney Resort. According to the South China Morning Post, the site itself is capable of housing as many as three, whole parks — and given that there’s only one there now, there’s plenty of room to grow. Keep your ear to the ground for more!