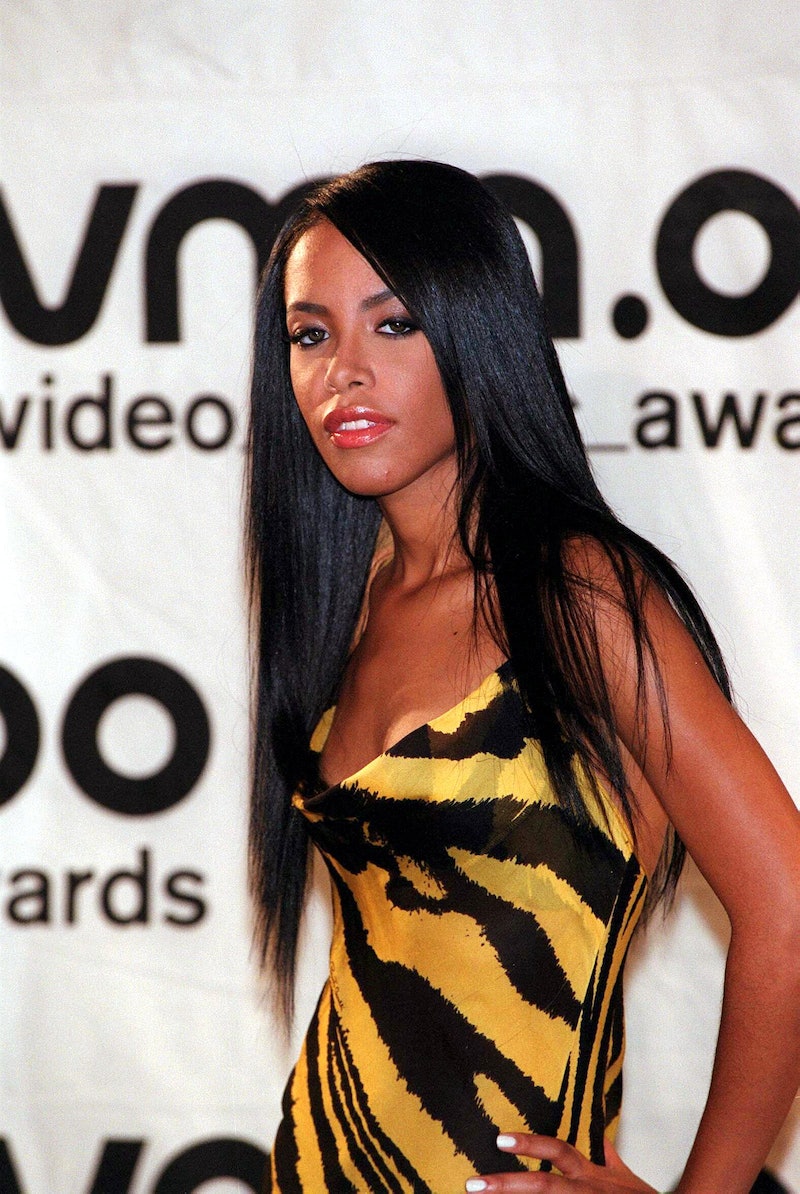 If you ever wanted to chat with me back in the late '90s, you could hit me up on AIM, under my screenname: AaliyahsLilSister. The name stuck with me as a tween; I was a shy kid with a love of baggy jeans, always blasting The Notorious B.I.G. on my Discman. Once I discovered Aaliyah's first album, Age Ain't Nothing But a Number, (produced by R. Kelly and discussed in Lifetime's new documentary, Surviving R. Kelly) in the summer of 1994, I begged my mother to let me have my natural curls straightened, so I could recreate my favorite singer of all time's sleek look and feel too cool in my Catholic school uniform.

This was the tween reality for not just me, but for lots of other black and brown girls in the '90s. Her songs reminded me and the girls in my middle school of our worth. If a boy wanted to ask for my number, he had to remember that "I'm not just anybody." That I was always "More Than a Woman," and more than enough for anyone. Along with Selena Quintanilla, who died in 1995, Aaliyah's untimely 2001 death in a plane crash transformed her into a posthumous angel; an ideal of what black and brown girls could be, and what they could achieve.

But the one part of Aaliyah's pop culture narrative that always bothered me is the alleged relationship she had with R. Kelly, whom she met when she was 12 years old. After VIBE reported in 1995 that Aaliyah and R. Kelly were illegally married when she just 15 years old and under the age of consent (the marriage was reportedly later annulled; both parties denied they ever actually got married), she reinvented her image, and connected with new producers, Timbaland and Missy Elliott. That was it: Back then, the story just disappeared. Where was the outrage? Where was the protection for Aaliyah, one of the biggest teen stars at the time? How could this be swept under the rug, while young children sang "I Believe I Can Fly" at kindergarten graduations?

Lifetime's six-part docuseries Surviving R. Kelly brings the decades-long history of sexual assault allegations against R. Kelly to light once more, revisiting Aaliyah's relationship with him in the process and sparking backlash from her family. The series is about more than just Aaliyah: Produced by dream hampton, it interviews the young women who have accused him of sexually assaulting them by using his position of power in the music industry as leverage. But his history with Aaliyah is discussed in the first episode, and for fans like me, it triggers the feeling that his alleged actions continue to overshadow the legacy Aaliyah amassed in her own right.

And what Aaliyah amassed was a love from fans — especially black young girls — that continues to endure. On the outro of her second album, One In a Million, she sings, "Came to spread my love to my fans across the world. Reach out to you, touch the hearts of boys and girls," and her fans took that to mean that she cared about every single one of them. She was known for a style she dubbed "street but sweet," and it's that image that Aaliyah fans have held onto ever since her death, which came just a month after releasing her final album, Aaliyah.

For me, Aaliyah's death was a gut punch. Your teen idols are supposed to grow up with you. They're supposed to be your north star as you listen to their songs to guide you through your first crush, and that first soul-crushing heartbreak. Her death was my first encounter with grief, and through that, I connected with the Aaliyah fandom on message boards who loved her as much as I did. I learned firsthand that for girls, especially young black girls, Aaliyah was the epitome of style, grace, and effortless cool. So many of us had ripped images of her out of magazines and brought them to salons for the "Aaliyah look."

After watching Thursday's episode of Surviving R. Kelly, which rehashed the details about his relationship with Aaliyah, I wanted to curl up with good memories of her — but the only streamable album I could find was Age Ain't Nothing But a Number, with R. Kelly lurking in the background of the album cover. Her discography is practically wiped away from streaming platforms, providing little access to all of the music she created post-R.Kelly. And if you want to buy a copy of her final Aaliyah CD, it'll cost you $50 on Amazon. Aside from some guest appearances on albums with her legendary production team of Missy Elliott and Timbaland, her musical legacy is virtually extinct. And on top of that, it also reminds me that she died all too soon in that tragic plane crash, so she isn't alive to stand with the women in the documentary, or share her own experience in her own words. We'll never have her answers, and that's an added pain.

It's time that Aaliyah is remembered for her long list of accomplishments, which were amassed in her tragically short life. After distancing herself from R. Kelly, Aaliyah's fresh One In A Million rebirth happened only two years later; five years after that brief renaissance, she was dead. Within that short period of time, she garnered roles in two feature films, Romeo Must Die and Queen of the Damned. She was set to star in the second and third installments of The Matrix. She transformed her entire sound.

Although Surviving R. Kelly is necessary, it adds an extra sting when your favorite artist is forever linked to such a painful ordeal. It's time that Aaliyah is remembered in a way that both she, and her fans, deserve. Her likeness helped little girls who looked like her feel that they in fact mattered, and that if they ever stumbled, they could dust themselves off and try again.

That's the Aaliyah who deserves to be honored, with no predator lurking in the shadows.

More like this
Kate Bush Revealed The Real Meaning Behind 'Running Up That Hill' Lyrics
By Darshita Goyal
Netflix Reveals First Look At Wednesday In The 'Addams Family' Spinoff Series
By Bustle Editors
The Bling Ring's Alexis Neiers Has Come A Long Way Since Her 'Pretty Wild' Days
By Sophie McEvoy and Arya Roshanian
Everything To Know About Taylor Swift’s 10th Studio Album, 'Midnights'
By Grace Wehniainen and Jake Viswanath
Get Even More From Bustle — Sign Up For The Newsletter