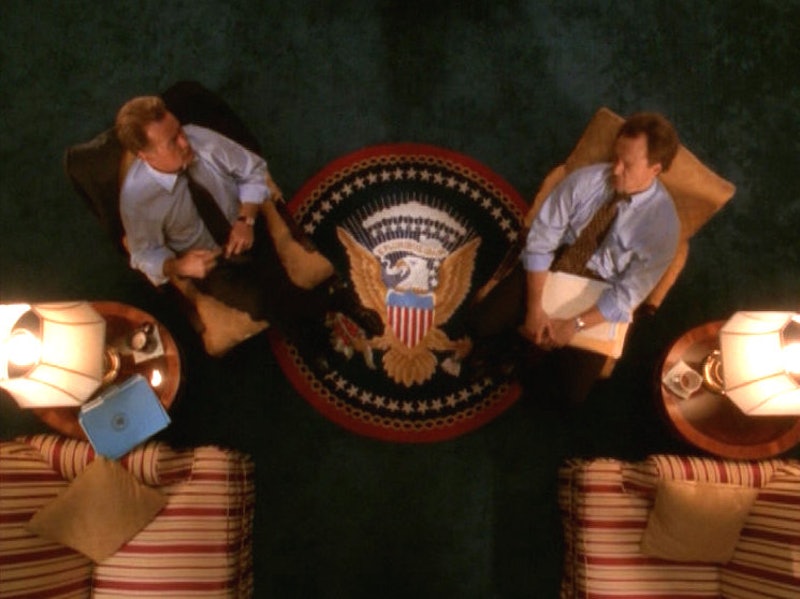 What's better than a West Wing revival? The answer is a West Wing revival starring Sterling K. Brown as the President. That's the possibility that's being thrown around right now, and it seems almost too good to be true. Not only is the talented actor a brilliant choice for the central character of a reboot, but the simple fact that we're already talking cast makes this possibility seem all the more real. And it's no idle speculation, either. This goss is hot, and it's coming straight from the source: a Hollywood Reporter profile on West Wing creator Aaron Sorkin.

The magazine interviewed the Emmy-winning writer and director for their most recent cover, and the conversation verged into a spitballing session for West Wing 2.0:

"[It involves] Sterling K. Brown as the president, and there’s some kind of jam, an emergency, a very delicate situation involving the threat of war or something, and Bartlet, long since retired, is consulted in the way that Bill Clinton used to consult with Nixon."

Um, yes please. Where do we sign? It's one thing to speculate on what a reboot would look like; we've all been doing that pretty much since the critically-acclaimed drama went off the air in 2006. But it's another thing all together to have the beginnings of a storyline, and an actor in mind for the lead role. Besides, President Sterling K. Brown is the leader we both need and deserve. The This Is Us actor has been in the entertainment world for a decade and a half now, with credits stretching back to 2002.

Somehow, it's only recently that he's been having himself a bit of a moment and finally starting to get his due. He broke out with a large role on Army Wives that lasted for the duration of the show's seven seasons. And, once that show ended in 2013, he picked up consistent — albeit small — roles on other shows for the next couple years. But then he scooped up the role of real-life lawyer Christopher Darden on American Crime Story and Randall Pearson in This Is Us pretty much back-to-back, and things haven't let up since. Brown snagged an Emmy, made a killer speech, and has a whopping three projects in post-production right now, including the hotly-anticipated Black Panther movie, in which he'll play the character N'Jobu.

If Sorkin wants him to take up the mantle of West Wing President, the competition is only likely to increase. But, as things stand now, it doesn't sound like the director is too worried about making schedules work. The 56-year-old seems set on Brown's involvement, and the only stumbling block he's come up against so far is figuring out how to involve the rest of the original cast, like Allison Janney, Richard Schiff, and Bradley Whitford.

With a whole different administration in the White House, it's easy to loop in Jed Bartlet as an advisor, but more difficult to justify the involvement of his old staffers. The West Wing has always hewn as closely as possible to real life, and Presidents aren't exactly known for inheriting the teams of their predecessors.

But before you get too overwhelmed by this obstacle, just remind yourself that we're in good hands. Sorkin shared in the same THR interview that he has a standing offer from NBC to do a West Wing reboot, so it's not like this window is in danger of closing. The show creator has already found the perfect star in Sterling K. Brown, and we're confident that he won't move forward without finding a way to fold in all our favorite familiar faces as well.

It just wouldn't be The West Wing without C.J. Cregg and Charlie Young and Josh Lyman, so unclench your jaw and breathe, because everything's under control.