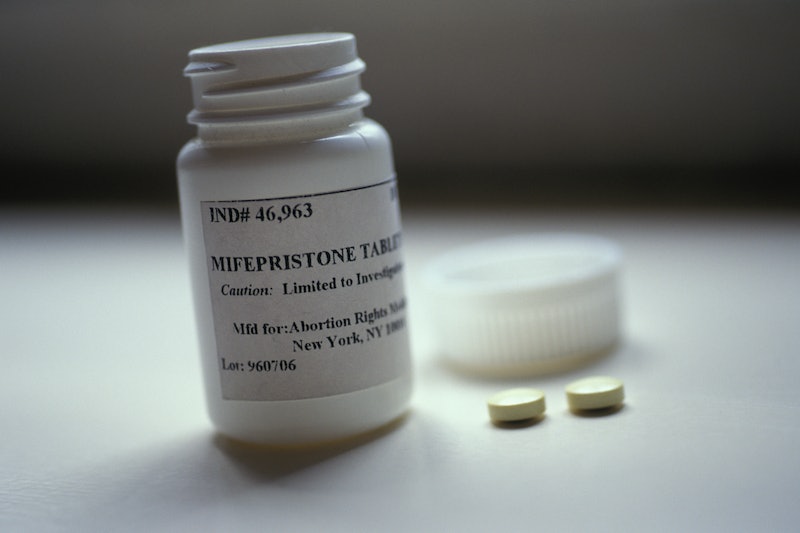 According to the FDA, medication abortion uses a combination of two medications to end a pregnancy up until 70 days of gestation. The first medication is mifepristone, which blocks progesterone, a hormone required for the development of a pregnancy. Within 24-48 hours of taking mifepristone, the pregnant person needs to take misoprostol, which is essential to emptying the uterus and completing the abortion safely. Because of the critical role of misoprostol, the FDA only approves the use of mifepristone when used in conjunction with misoprostol.

"Reversing" an abortion, however, is purported to involve pregnant people taking mifepristone, then not taking the necessary misoprostol. The pregnant person would then take high doses of progesterone to try to re-encourage the development of a person’s pregnancy. This protocol comes from a 2012 study of seven pregnant people, four of whose pregnancies continued, about which American College of Obstetricians & Gynecologists (ACOG) wrote, "This is not scientific evidence that progesterone resulted in the continuation of those pregnancies."

However, new research has shown this method to be unsafe, as long supported by medical professionals.

The study, published in the journal Obstetrics and Gynecology, was originally supposed to include 40 women, all of whom were scheduled to get medication abortions and consented to delay their procedures in order to test the abortion reversal method. However, the researchers agreed to halt the study after three of the first 12 participants experienced excessive bleeding and needed to be hospitalized. One even required a blood transfusion. Even though the research was stopped before being able to test the specific risks of giving pregnant people high doses of progesterone after taking mifepristone, the researchers were able to conclude that mifepristone must be followed by taking misoprostol — otherwise, pregnant people could be at risk of massive bleeding and hospitalization. "Patients in early pregnancy who use only mifepristone may be at high risk of significant hemorrhage," the study's conclusion wrote.

According to the Center for American Progress, the catalyst for the idea that medication abortion can be "reversed" comes from the mistaken assumption that people who choose to have abortions will regret the decision, along with a false understanding of the way misoprostol operates in the body. Despite this process not having been rigorously tested until now, six states require that doctors tell their patients seeking this treatment that medication abortions can be reversed. These states are Arkansas, Idaho, Kentucky, Nebraska, Utah, and South Dakota, and NBC News reports that Georgia, Kansas, North Carolina, Ohio, and Wisconsin are also considering legislation that would mandate doctors to tell their patients about “reversing their abortion” when they’re seeking medication abortions.

Medication abortions, when both mifepristone and misoprostol are taken according to instructions, are overwhelmingly safe, the FDA says. Still, mifepristone is subject to stringent FDA regulations called Risk Evaluation and Mitigation Strategy (REMS), which makes the medication harder to prescribe or find, according to the Bixby Center for Global Reproductive Health at University of California, San Fransisco.

Access to reproductive health care, including abortion services, has the potential to be dramatically increased through procedures like medication abortion. However, this new study demonstrates the ways that anti-choice myths about “abortion reversals” can create significant health risks. Debunking this myth with research is especially important for pregnant people who could otherwise receive the safe and effective medical care they deserve.

More like this
25 Inspiring Quotes From Black Women To Celebrate Black History Month
By Kyli Rodriguez-Cayro and JR Thorpe
24 History-Making Black Women You Probably Didn't Learn About In School
By Ayana Lage and JR Thorpe
Here’s Where The NHS Nurses’ Strike Currently Stands
By Sophie McEvoy
How Ovulation Affects Your Sense Of Smell, Libido, & More
By JR Thorpe and Lexi Inks
Get Even More From Bustle — Sign Up For The Newsletter
From hair trends to relationship advice, our daily newsletter has everything you need to sound like a person who’s on TikTok, even if you aren’t.