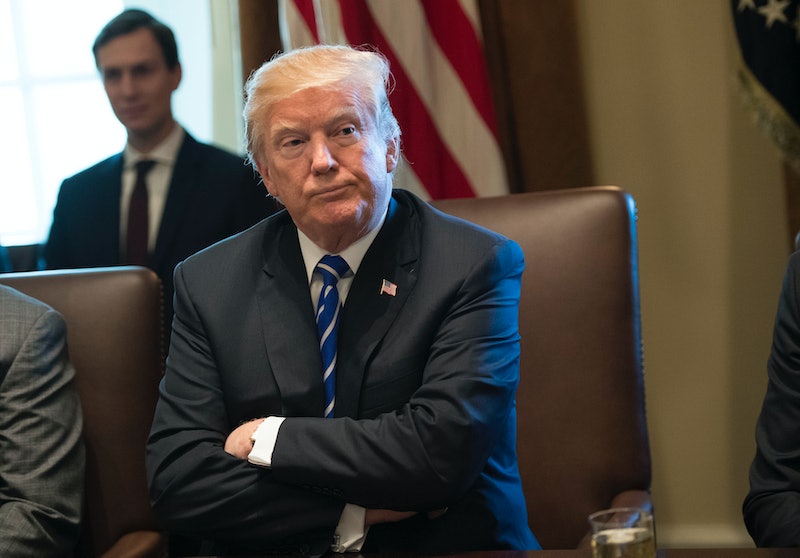 After the Access Hollywood tape first became public in 2016, Donald Trump apologized for bragging about grabbing women without consent. Nevertheless, The New York Times reported Saturday that Trump has questioned the authenticity of the recording in private, contradicting his previous admission that it featured his voice. On Monday night, Access Hollywood fired back at Trump: "The tape is very real."

The show's host Natalie Morales addressed the headlines that President Trump didn't believe the 2005 tape was authentic, telling viewers: “We wanted to clear something up that has been reported across the media landscape. Let us make this perfectly clear — the tape is very real." Morales reminded viewers that Trump's excuse last October was that it was simply "locker-room talk." She added: "He said every one of those words."

Trump suggested to an unnamed senator and an adviser that the tape was not "authentic," according to The New York Times. When asked about the report Monday, White House press secretary Sarah Huckabee Sanders avoided the question. "The president addressed this, this was litigated and certainly answered during the election by the overwhelming support for the president and the fact he's sitting here in the Oval Office today," she told reporters.

The report that Trump privately claimed the Access Hollywood tape wasn't real was released as the president publicly questioned the authenticity of sexual assault accusations against Alabama congressional candidate Roy Moore. "Forty years is a long time. He’s run eight races, and this has never come up," Trump said in a news conference last week. "He says it didn’t happen. You have to listen to him."

Trump made a similar argument when multiple women accused him of sexual assault during the 2016 election, calling the accusations a "distraction" and repeatedly denying any wrongdoing. However, when the Access Hollywood tape was released, he admitted it was his voice talking about grabbing and kissing women without consent, though he did point out that the recording was taken a long time ago.

"I said it, I was wrong, and I apologize," Trump said in a video statement last year. "I’ve never said I’m a perfect person, nor pretended to be someone that I’m not. I’ve said and done things I regret, and the words released today on this more than a decade-old video are one of them. Anyone who knows me knows these words don’t reflect who I am."

Weeks after his initial apology, Trump called the recording illegal, claiming Access Hollywood didn't have a right to record him. "The microphone was not supposed to be on," he told Fox News. Still, claiming he was recorded illegally reaffirmed his admission that it was indeed his voice on the tape.

Trump reportedly calling the tape into question months after the initial scandal confused those who remember his swift apology. As TV writer Bryan Behar wrote on Twitter: "In 2017, this Donald Trump is calling that Donald Trump a liar."

Similarly, comedian Mike Drucker pointed out that once you've taken responsibility for something, it doesn't make sense to claim it never happened. "You can't be like, 'Hey I'm sorry I robbed this bank. Also, there was no bank,'" Drucker tweeted.

Despite telling reporters earlier this month he's "very happy" sexual assault is getting national attention right now, President Trump has continuously denied every sexual assault and harassment allegation against him and is now reportedly denying vulgar language he already admitted to saying. "I think it's a very special time, a lot of things are coming out, and I think that's good for our society and I think it's very, very good for women," Trump said last week.

Access Hollywood would like to assure the nation that the Trump tape that came out last year is authentic, regardless of who Trump privately tells otherwise.