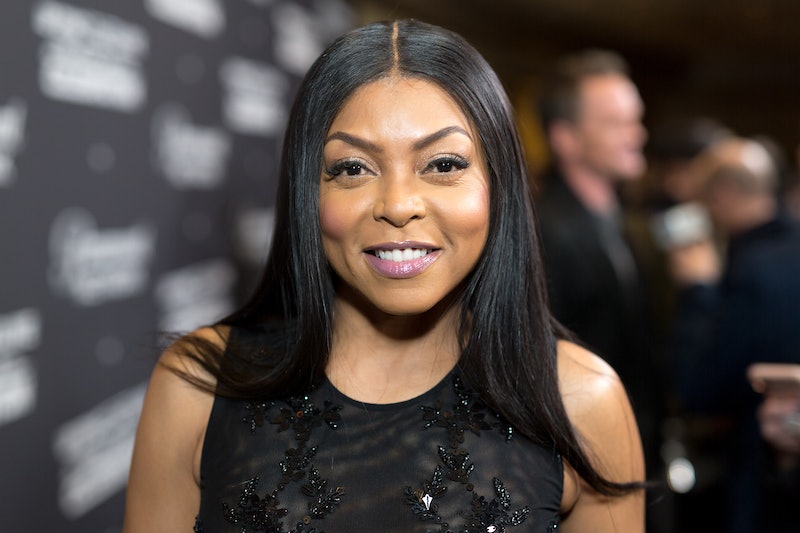 Taraji P. Henson's portrayal of Cookie Lyon on Empire led her to become the first black actor to win a Critics Choice Television Award for Best Actress in a Drama Series in 2015. A year later, she was named one of the most influential people in the world by Time Magazine. In 2017, she won a SAG Award for her portrayal of Katherine Johnson in the box office smash Hidden Figures. And yet, as she tells me over a recent breakfast at the Ritz-Carlton, she still has to convince Hollywood that she's a serious actor.

"I always feel like I’m still proving that I’m a bonafide actress, you know what I mean?" she says when we meet in March, during promotion for her new Tyler Perry film Acrimony. "Where I came from made me who I am, but I’m also a trained actress. Just because I talk like that girl who was in the hood, you can’t judge me by that. Because once you give me the script, as I’ve proven time and time again, I deliver."

There's a lot of proof to back Henson up. Hidden Figures — in which she co-starred alongside Octavia Spencer and Janelle Monáe — became the highest-grossing Best Picture nominee to date, making over $200 million worldwide. Hell, even her first prominent role was as Yvette in 2001's Baby Boy, which was fifth at the box office its opening week and received four out of five stars from Roger Ebert. But none of those results are enough to change the facts. Black women are paid 64 cents to every dollar that white men make in and out of Hollywood. Forbes' highest paid actresses of 2017 list didn't have a single black woman in the top 10. And, even in 2018, people are hating on celebrities like Tiffany Haddish or Henson for being too "loud" or "annoying" or "classless" — just for being their authentic selves.

"A lot of times I get judged for being me. But you can't do that. You can’t just assume I can’t give you Shakespeare in the Park or Chekhov or Euripides because I speak like this. I went to an HBCU [Historically Black Colleges & Universities], yes, but I was still trained," Henson says with clear passion. "I’m just gonna work until my work can’t be denied. So that, one day, when they finally get it, they’re going to wake up and be like, 'oh my god, wow, she’s been doing this right under our noses all this time.' While you were judging, I’ve been working."

Acrimony, out March 30, is some of Henson's finest work to date. In the film, she plays Melinda, a "woman scorned" whose ex-husband has betrayed her. Her grudge runs so deep that she's out for revenge — whether or not her ex-husband (Lyriq Bent) is truly deserving of magnitude of her rage. Despite the fact that Melinda goes to increasingly alarming lengths to get even for the perceived slight, Henson doesn't qualify her as a villain, and she doesn't play her like one. In the actor's hands, Melinda has depth and gravitas to be both hated and loved for who she is — not unlike Henson's most famous creation, Cookie Lyon.

"That’s the challenge to play a character that can be easily hated. Cookie’s like that. I mean, the things she says out of her mouth! But... she’s a truth sayer, so literally she’s saying things that people are afraid to say," Henson explains. "I love to play characters that can be easily liked and then flip it so you’re sitting there like 'why do I like this person, I should really hate her, she’s not a good person, but I like her.'"

While trailers might make Melinda seem like the "angry black woman", shouting, destroying property, and having to be held back from fights, that's a harmful stereotype that the character calls out in the film, and Henson does in our conversation. "I don’t call it black woman rage, because... that’s a human trait to snap. That doesn’t have a color to it," the actor says. "We battle dark side and light side every day. That’s a choice we make. Some people might be wired differently in the brain and they can’t help themselves, but for the most part we have to choose, 'Today’s gonna be a good day. I’m not gonna slap a b*tch because she’s looking at me wrong.' That’s a choice that we make. We all are capable of rage."

How deeply Henson thinks about her characters is why she's capable of communicating an entire wealth of emotion with only a single look — through Melinda, through Cookie, through Yvette, and everyone in between. But no matter how hard she works, how many awards she's nominated for or wins, or how many hurdles she jumps, the goal posts just keep moving, and not just in the ways she's perceived by audiences.

Take, for example, an issue that Henson brings up in her 2016 memoir, Around The Way Girl. In the book, the actor claims that she was paid less than 2 percent of Brad Pitt's salary for The Curious Case of Benjamin Button, the movie for which she was nominated for her first Oscar. (At the time, representatives of the film declined to comment on the claims.) "The math really is pretty simple," Henson wrote in her memoir. "There are way more talented black actresses than there are intelligent, meaningful roles for them, and we’re consistently charged with diving for the crumbs of the scraps, lest we starve."

And while a 2016 Variety article reports that Henson makes the same $175,000 per episode as her Empire co-star Terrence Howard, that salary is almost than half of what many of TV's white lead actors are being paid. So, it's no wonder that Henson still feels that her hardest fight in Hollywood is "getting my money."

But of course, she's not going to stop fighting — and not just for herself. "I have an audience who has been following me since Baby Boy, and they are still with me. Not a lot of people can say that," Henson says, sounding equal parts grateful and humbled. "I don’t take my job lightly. I know people are counting on me. I want to be the type of actress when you hear my name on something, [you're like] 'I gotta go see it because I know she’s gonna deliver.' Undeniable."

Henson has two films under her belt for 2018 already — Acrimony and Proud Mary before it — and at least two more to come, so it shouldn't be long before those who don't already consider her "undeniable" come around. But even if Hollywood keeps sleeping on everything she has to offer, there's no doubt that the actor will still be working, fighting, and delivering, time and time again.