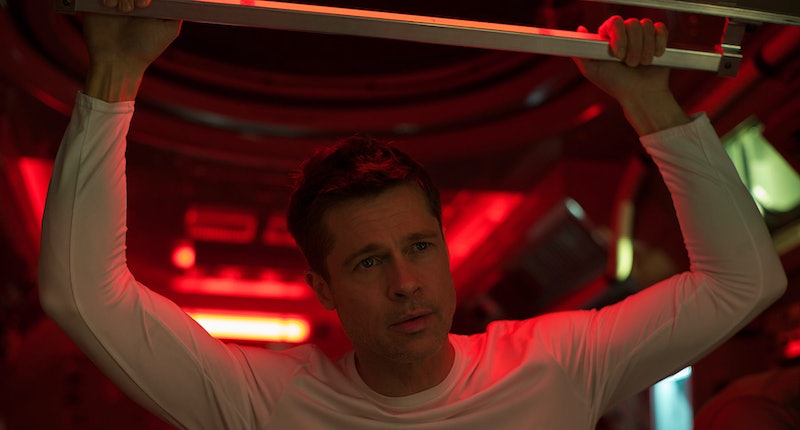 Space is so hot right now. Or, at least in Hollywood it is. Over the past several years, there's been a huge trend in sending big-name actors to outer space in prestige dramas that double as technological marvels. There was Sandra Bullock in Gravity, Matthew McConaughey in Interstellar, Matt Damon in The Martian, Ryan Gosling in First Man, and now there's Brad Pitt in Ad Astra. The previous examples vary from science-fiction to science-fact, so where does Ad Astra fit in? Is Ad Astra a true story like First Man, or is the movie a straight up fantasy like Interstellar?

If you're at all familiar with the plot of Ad Astra, then you will not be shocked to learn that this is a wholly fictional tale. If you're not familiar with the film's story, here's what it's about: The film takes place in the near future where humans are capable of exploring the outer solar system and have bases on the moon and Mars. Pitt portrays astronaut Roy McBride, who is sent on a mission to the outer reaches of our solar system to find his father. McBride's dad, also an astronaut, disappeared 30 years prior while on a mission to Neptune to search for intelligent alien life. But with dangerous energy bursts now emanating from that planet and heading toward Earth, authorities have come to believe that McBride's father is alive and well on Neptune and is seeking to destroy our planet. So it's up to McBride to locate his dad, if he is indeed alive, and stop him, if he is indeed behind the bursts.

Ad Astra is an original tale, both co-written and directed by James Gray. Gray is known for films like We Own the Night and The Lost City of Z, so it's no surprise that Ad Astra plays like a mystery with many twists and turns. Gray's co-writer on the film, Ethan Gross, is best known for his work on the sci-fi TV series Fringe, which helps explain Ad Astra's sci-fi weirdness. And make no mistake, this movie has some weird stuff going on.

For instance, the movie features space pirates. Yes, space pirates. Now, these aren't peg-legged, eye-patched mateys sailing around in floating ships adorned with Jolly Roger flags (unfortunately). Instead, they're a rather realistic depiction of what lawlessness might look like on a future moon settlement. In one scene released ahead of the film, McBride comes under assault by some of these pirates who drive rovers across the lunar surface in the hopes of robbing military vehicles.

As far as the inspiration behind the story, you'll have to look to the past rather than the future. The distant past, it turns out. Gray told CNN that he looked to Homer's Odyssey for inspiration, with the desire to tell a futuristic version of the story from the point of view of Odysseus' son. "The whole M.O. originally was The Odyssey from Telemachus' point of view," Gray said. "His father, Odysseus, goes away for 20 years and disappeared. He would have to reconcile with that." In the case of Ad Astra, obviously, McBride is Telemachus.

Ad Astra may not be a true story, but with its plot rooted in ancient myth, it should still feel eminently relatable and familiar.

More like this
North West Will Make Her Acting Debut Alongside Mom Kim Kardashian
By Radhika Menon
Gerard Butler Insisted On Adding This Pivotal Scene To 'Plane'
By Catharina Cheung
Jemima Khan Used Her Own Life As Inspo For 'What’s Love Got To Do With It?'
By Darshita Goyal
What Is Mary J. Blige’s Net Worth? The 9-Time Grammy Winner Is Doing “Just Fine”
By Hugh McIntyre
Get Even More From Bustle — Sign Up For The Newsletter
From hair trends to relationship advice, our daily newsletter has everything you need to sound like a person who’s on TikTok, even if you aren’t.