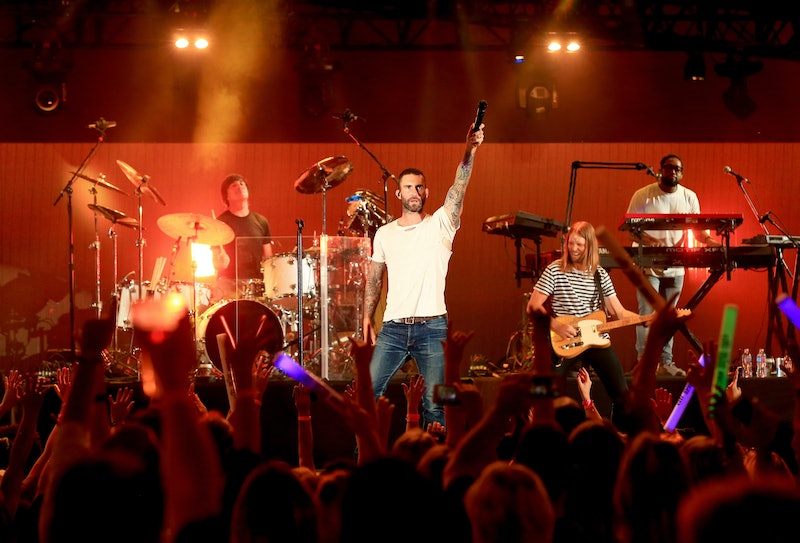 According to the Associated Press, the organization released a statement explaining that Maroon 5 will skip the traditional pre-game presser in order to "let their show do the talking as they prepare to take the stage this Sunday." Instead, the NFL will use a "cross-platform rollout of behind-the-scenes footage and content" to give both the media and football fans the chance to see what went into the process of creating the show that fans will enjoy on Sunday night.

Maroon 5 — along with fellow performers Travis Scott and Big Boi — have received some backlash from critics like comedian Amy Schumer, who have urged musicians to turn down the Halftime Show in order to protest the NFL's treatment of Colin Kaepernick, the former San Francisco 49ers quarterback who launched a silent protest of kneeling during the National Anthem. In response, when Scott was confirmed as one of the performers in early January, the rapper announced that he was partnering with the NFL to donate $500,000 to the non-profit organization Dream Corps, according to Variety. On Tuesday, People reported that Maroon 5 is following Scott's lead, and — alongside the NFL and Interscope records— is donating $500,000 to Big Brothers Big Sisters of America. (Performers are reportedly not paid for playing the halftime show.)

Despite their charitable actions, the NFL's announcement that Maroon 5 would skip the press conference has earned plenty of critical tweets from fans, many of whom feel that it's the band's way of avoiding questions about Kaepernick.

Maroon 5 has not offered any more comment on their performance. However, in addition to his donation, Scott seemed to acknowledge the controversy surrounding his decision to perform at the Super Bowl Halftime Show, explaining in a statement, "I back anyone who takes a stand for what they believe in. I know being an artist that it's in my power to inspire." He continued, "Before confirming the Super Bowl Halftime performance, I made sure to partner with the NFL on this important donation. I am proud to support Dream Corps and the work they do that will hopefully inspire and promote change."

Founded by CNN's Van Jones, DreamCorps' mission is to "inspire action, serve justice, and improve people's lives," according to their website. The organizations current goals appear to be focused on providing opportunities for at risk youth, helping to fight poverty through a "green economy" and to fight for prison reforms.

Before Maroon 5, Scott, and Big Boi were confirmed as performers, rumors surfaced that a number of major recording artists had turned down the NFL. In October, a source told Entertainment Tonight that Rihanna was "the front-runner for next year’s super bowl halftime show," but that she rejected the offer because she "stands with the players and Colin Kaepernick." The outlet also reported that Pink was approached to perform at the Super Bowl, but that negotiations fell through. Other artists who were rumored to have said no to the job include JAY-Z and Cardi B.

Despite the controversy surrounding this year's show, Maroon 5's frontman Adam Levine told People that "playing the Super Bowl has been a dream of our band for a long time." While it remains unclear whether or not the band will ever overtly address the backlash surrounding their decision, in their performance it's clear that the band — along with Scott and Big Boi — are committed to putting on the best Halftime Show they possibly can.