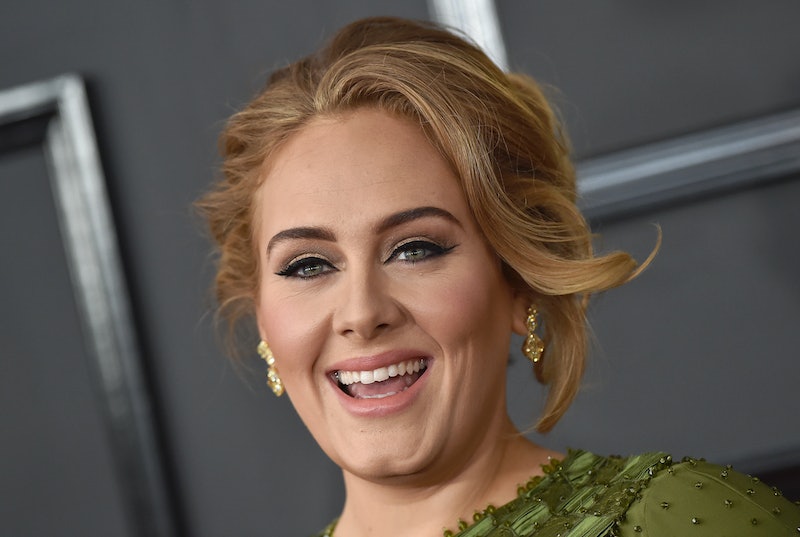 Adele's fans won't be hearing any new music until they're all on the other side of the pandemic. On Saturday, June 27, Adele told fans to "wear a mask and be patient" for her new music, after a fan asked her about the status of her upcoming fourth studio album. The singer shared a photo of herself singing on Instagram, along with a smiling emoji caption, which inspired one fan to inquire about whether or not Adele was dropping a hint about new music.

"Tease? Albums coming out today???!!!! Tell me now!!!!" the fan commented on the photo, which earned a cheeky response from the Grammy winner, in order to explain that she won't be releasing anything until after the pandemic ends. "Of course it's not," Adele wrote back. "Corona ain't over. I'm quarantining." She punctuated her comment by advising her fans to "wear a mask and be patient," along with a simple heart emoji.

Adele first began teasing the follow-up to her 2015 album, 25, in May 2019, shortly after her 30th birthday and split from husband Simon Konecki. "30 tried me so hard but I’m owning it and trying my hardest to lean in to it all," she wrote on Instagram at the time. "No matter how long we’re here for life is constant and complicated at times. I’ve changed drastically in the last couple years and I’m still changing and that’s okay." Near the end of her post, she referenced the fan reaction to the news of her divorce, by joking that "30 will be a drum n bass record to spite you."

In September 2019, People reported that Adele's upcoming album will feature music inspired by the end of her relationship with Konecki. "She is definitely getting ready both mentally and physically to promote new music," one source told the outlet. "She talks about last year as a very difficult year, and she’s said in the past that creating new music is almost like therapy. You can tell that she is ready to share with her fans."

Despite the heartbreaking subject matter, another source told the magazine that Adele was in a good place, and enjoying life in her new home in Los Angeles with son Angelo. "She likes to keep her life private for both her and her son and is able to do that in L.A. She co-parents with Simon, and they seem to get along and spend time together with Angelo as well," the source said. "She is so busy, but her life is better-rounded than it was before. She is very fulfilled being an artist. New music is still a big deal for her, and she feels alive and happy."

Though People reported that Adele was planning to release her fourth album in 2019, the year came and went without any new music. However, in February 2020, the singer announced at her best friend's wedding that she was planing to drop the album the following fall. "Expect my album in September," Adele said in a video from her performance on the big day, according to Variety.

In May 2020, Adele's manager, Jonathan Dickins, told MusicChoice that the singer had decided to delay her album due to the continuing coronavirus pandemic. "It isn’t coming in September, it’ll be ready when it’s ready," he revealed. "We’re all in the same boat, you’re doing stuff and then all of a sudden, the world stops. It’ll come when it’s ready. I can’t put a date on that yet. We have music, but we’re still working." In the meantime, there's nothing else to do, but to do as Adele asked: Just wear a mask and be patient.