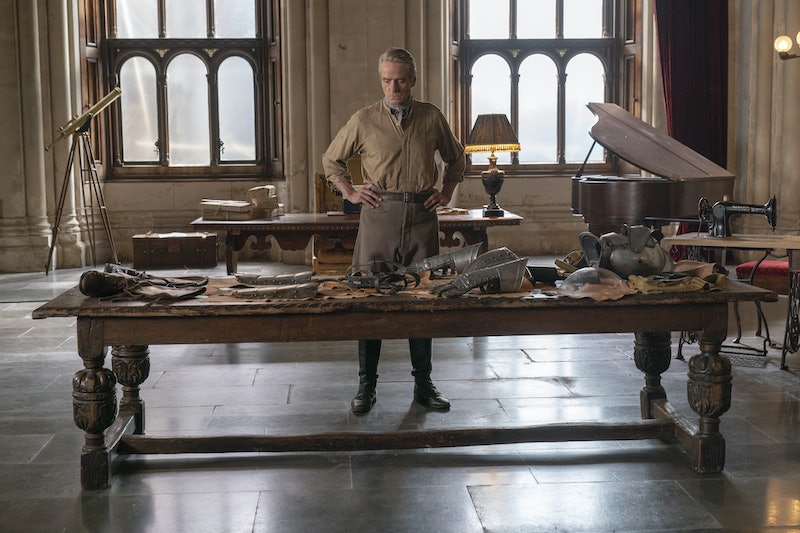 Spoilers ahead for Watchmen Episode 3. The best unkept secret of Watchman was officially revealed when Jeremy Irons' character declared his name. Irons is Adrian Veidt on Watchmen as he stated himself in "She Was Killed by Space Junk" while writing a letter. Viewers familiar with the comics could have guessed Veidt's identity, but HBO has cheekily been keeping it under wraps — only referring to Irons' Watchmen character as "Probably Who You Think He Is." Now, who Irons is portraying has been officially confirmed. But just because viewers know who he is doesn't mean there still aren't tons of questions about Veidt's whereabouts and actions on Watchmen.

The British master of the manor continued to experiment on his clones during the Nov. 3 episode, but he now added shooting buffalo with a bow and arrow to his list of sadistic hobbies. It was through this hunting that his identity was specifically stated. While a purple mask matching Veidt's former Ozymandias superhero alter ego could be spotted earlier in Irons' scenes, he made it official when signing a letter addressed to the game warden.

"All best wishes and encouragement, Adrian Veidt," he dictated to his servant Crookshanks. And in case that wasn't clear enough, Veidt then donned his gold and purple Ozymandias costume from the comics.

Another highly-anticipated character from the comics also showed up in the Nov. 3 episode — Jean Smart's Laurie Blake, who once embodied the Silk Spectre II persona after her mother originated the superhero identity. For non-comic readers, she helpfully outlines what Veidt did in Alan Moore and Dave Gibbons' 1986-1987 graphic novel. While telling a joke in a phone call to Doctor Manhattan, she talks about a hero who is "the smartest man in the world." He is smart, apparently, though also dangerously eccentric. Veidt claims that he saved humanity by dropping a giant alien squid in New York, which did stop humans from fighting one another, but also killed three million people.

As absurd as it sounds, this anecdote is actually what Veidt did at the end of the Watchmen comics. Laurie is one of the only people who knows the truth (with the rest of the world believing the squid was a real alien). So it's no wonder that Laurie told Agent Dale Petey that she's "not a fan" of her former superhero colleague.

Petey also noted that Veidt has been officially declared dead after selling his company to Lady Trieu. Through HBO's supplemental website that contains Agent Petey's files, you can read Veidt's obituary which gives more insight into what the "billionaire industrialist" had been doing since dropping a squid on the Earth to prevent nuclear war on Nov. 2, 1985. (It's appropriate his character reveal occurred in the episode that aired one day after the anniversary of Veidt's secret attack.) But while the world considers Veidt dead, he appears to be held captive in his stately manor full of clone servants.

The game warden wrote to Veidt to say it appeared he was planning an escape attempt and that would go against "the terms of your captivity." Veidt pompously denies the accusations. But, considering his hyper intellect and his previous deception against Earth, it's very likely he is hatching a plan to escape if he's being held against his will. And he's using his Phillips clones as a way to test his next great invention that may aid him in breaking free of the manor.

Who is holding Adrian prisoner and why are unclear. Even the where is a mystery since while it appears Adrian is at an English manor, that might not be the case. With Adrian's ongoing fascination with Doctor Manhattan (who now lives on Mars), there's a possibility that this actual superhuman may be involved. But what is certain is that Adrian has another maniacal plan brewing in that genius brain of his — and he may revert to his old Ozymandias persona in order to make his great escape.