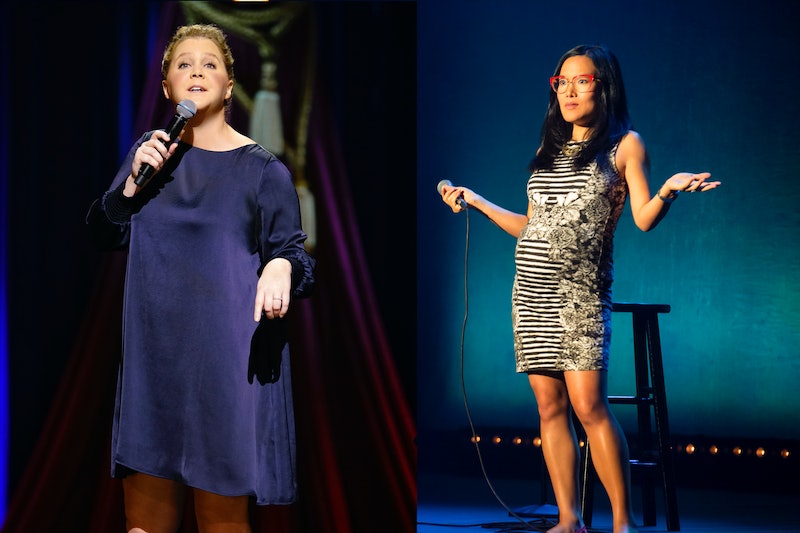 With her newest Netflix comedy special, Growing, comedian Amy Schumer shows a side of herself audiences haven’t seen before. From jokes about hemorrhoids to having to work while pregnant, Schumer gets real, joking that “b*tches all lie about” how hard it is to be pregnant. She also sheds light on having hyperemesis gravidarum, a condition that leads to excessive vomiting and extreme nausea. The new special adds another narrative about pregnancy and motherhood to the shortlist of popular standup specials about the topic (see also: Ali Wong’s 2016 special Baby Cobra, or Christina P’s 2017 Mother Inferior).

As a new mom balancing motherhood and work life, who, like Schumer, struggled with hyperemesis gravidarum during pregnancy, I appreciate these candid portrayals of maternal experiences. But as a Black, non-binary femme who is both a doula and researcher of issues related to Black maternal and infant health, their specials leave me wondering: what would a standup special starring a Black, pregnant person look like?

These specials — Growing, Baby Cobra, Mother Inferior — brought transparent and vivid narratives about labor, miscarriage, and the physical changes bodies go through during pregnancy to audiences with humor and levity. Schumer’s new special was called "one of the most honest depictions of pregnancy we’ve seen on TV" by Mother.ly, and Wong's specials were called “the 30-Something Woman's What To Expect’’ by HuffPost. But why isn't there an equivalent, mainstream depiction of a Black pregnant person's experience?

Not only are Black women underrepresented in comedy, Essence reported that Black women entertainers make less money compared to their white counterparts — much less than Black men, too. When Mo’Nique revealed the gap in pay she allegedly faced compared to other comedians like Schumer, Chris Rock, and Dave Chappelle, she was met with backlash. Still, comedians like Mo'Nique, Tiffany Haddish, Marina Franklin, and Amanda Seales offer insight into Black women’s lives, including stories that deal with trauma, pain, and abuse, through humor. Black women have shared stories about these issues as they relate to pregnancy and parenthood in literature, on film, in music, and art — why not in comedy?

Male comedians have shared narratives about the Black lived experience on stage for decades. Comedians like Rock, Chappelle, and Richard Pryor brought honest accounts about state violence, child abuse, and mass incarceration, to the national stage, which laid the groundwork for guys like Michael Che and Jerrod Carmichael. Black men in comedy who talk about these issues use humor as a tool for catharsis and education or, as Chappelle explained in a 2017 Netflix special, are inspired by “the alchemist’s fire that transforms fear and tragedy into levity and livelihood.”

When it comes to issues related to pregnancy and motherhood, things get complicated. How could Black women address these issues in the context of pregnancy and motherhood on a mainstream stage, given the alarming rates of Black maternal and infant deaths in the United States? Issues like undiagnosed pre-existing conditions, systemic and structural barriers to regular care, or lack of access to culturally respectful care, disproportionately impact Black pregnant people and mothers, and result in dramatically different experiences of being pregnant. The Harvard T.H. Chan School of Public Health reported that more than half of people who die while pregnant, or from preventable postpartum complications, are Black women. According to the CDC, pregnancy-related deaths impact Black women four times more than white women. And another study, published in 2007, revealed that “of five medical complications that are common causes of maternal death and injury, Black women were two to three times more likely to die than white women who had the same condition,” NPR reported.

While some people think that class privilege will protect women from these outcomes, racial disparities in maternal health impact parents regardless of income. In an op-ed for CNN, Serena Williams explained that if not for her “access to such an incredible medical team of doctors and nurses at a hospital with state-of-the-art equipment” who could quickly and carefully assist her when she experienced life-threatening complications, she wouldn’t have survived the 2018 birth of her daughter Olympia Ohanian. For Beyoncé, her experience with preeclampsia, a pregnancy complication that causes high blood pressure and can lead to seizures, resulted in an emergency c-section giving birth to twins Sir and Rumi Carter in 2017.

Sure, there are many relatable moments that most pregnant people, regardless of race, will understand, from navigating relationships with partners and co-parents, to preparing a birth plan, or deciding whether or not to breastfeed. It is important, though, to highlight the fact that existing as a Black, pregnant person today comes with unique fears, challenges, and worries that go beyond the physical aspects of pregnancy. As the activist and writer Audre Lorde wrote, Black parents “fear our children will be dragged from a car and shot down in the street, and [others] will turn [their] backs on the reasons they are dying,” while non-Black parents worry their children will “testify against [them].”

The statistics around Black maternal and infant health are nothing short of devastating. But imagine how powerful it would be to have a Black woman, a Black mother, or a Black pregnant person bring their own story to the stage. When I imagine a Black woman opening a special about pregnancy and motherhood, I picture her thanking Gabrielle Union for her honest depiction of struggling with miscarriages and infertility before opting to find a surrogate. Or maybe she’d joke about discussing her will with her partner “just in case” she dies during childbirth. Or maybe she’d joke about how she’s worried about being mistaken for her child’s nanny. No matter the specific jokes, the Black, pregnant mom standup special would bring a new meaning of Black comedy to life.

More like this
6 Abortion Advocates To Follow On TikTok
By Sara Youngblood Gregory
The UK Abortion Laws In 2022, Explained
By Sophie McEvoy
How To Protect Your Digital Privacy If You Need An Abortion Post-Roe
By Kaitlyn Wylde
Why You're Seeing Green Bandanas At Abortion Rights Protests
By Lexi Inks
Get Even More From Bustle — Sign Up For The Newsletter