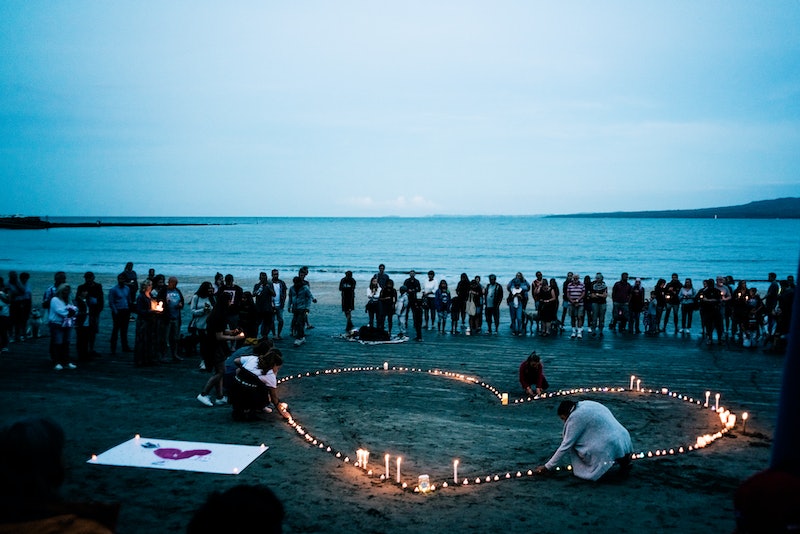 In this op-ed, Wardah Khalid, founder and president of Poligon Education Fund, a non-profit dedicated to amplifying Muslim American voices in Congress, explains why the interfaith response to the shooting at a New Zealand mosque needs to be followed by political action.

The horrific shooting at a New Zealand mosque on Mar. 15 was not only a tragedy for my Muslim community, but also for faith communities across the globe. In the U.S., Muslims, Jews, Christians, and those of other faith and no faith backgrounds gathered throughout the country at Jummah (Friday prayers) and vigils over the weekend to honor the memory of those who fell victim to the hateful attacks, and stand in solidarity with each other.

While I was truly touched by these kind gestures, they also left me frustrated. Why? Because this scene was becoming all too common, and unless our political leaders match the support shown by interfaith communities, any one of our houses of worship could be targeted next.

Time and time again, the faith community has reached out and supported each other in the face of unspeakable tragedy. It was only a few months ago when I stood with the American Jewish community outside the White House after the Tree of Life synagogue shooting. Interfaith vigils were also held after the 2015 shooting at a Historically Black church in Charleston, South Carolina, the 2012 shooting at a Sikh temple in Wisconsin, the 2015 shooting at an apartment in Chapel Hill, and the 2019 shooting on a highway in Indiana.

All of these attacks came as a result of a cultural environment that increasingly ignores the global threat of white nationalism. And their corresponding vigils beg the question: why do faith communities shoulder the burden of speaking and demanding action against hate?

President Trump, who called neo-Nazi protestors in Charlottesville, Virginia “very fine people,” responded to Friday’s attacks, saying that he did not believe white nationalism was a rising global threat but rather, “a small group of people that have very, very serious problems.” It was also Trump who, in his fiscal year 2019 budget proposal, completely eliminated funding for the Department of Justice’s Community Relations Service, which was created by the Civil Rights Act of 1964 and provides services to communities to ease racial tensions. There are strong indications he will try to do so again this year.

Congress has not fared much better. Recently, many members exercised outrage over tweets made by Rep. Ilhan Omar (D-MN-5) that were perceived as anti-Semitic. Only after intense community pushback was their resolution, originally intended to rebuke Omar, amended to condemn white supremacy, bigotry, and Islamophobia in addition to anti-Semitism.

Congress did pass legislation in 1990 requiring the Department of Justice to collect hate crime data, but these incidents are largely underreported. This is partially due to the fact that many police officers, who report these numbers, are not trained in identifying and investigating hate crimes, according to ProPublica. But even the latest report showed that hate crimes have reached their highest numbers in a decade, with over 7,000 separate incidents in 2017 alone.

Meanwhile, white nationalism and white supremacy, key factors in these statistics, are thriving. And they will continue to strengthen as this country’s leaders implement discriminatory policies (such as the travel ban) that prevent refugees and travelers from entering a country based on their ethnicity or religion. Those in power must take responsibility for how their words and policies have contributed to these movements, condemn the violence, and take action to ensure such attacks do not happen again. Thoughts and prayers will not bring back the 50 Muslims who died in New Zealand nor the other victims who have perished in similar attacks against faith communities.

No one should feel unsafe in a house of worship, especially in a country in which freedom of religion is a central tenet. And those closest to these atrocities should not also be responsible for pushing lawmakers to act and acknowledge their pain and grief. Faith communities know that we are in this together, and we have had enough.

More like this
Scotland's First Period Dignity Officer Is... A Man?
By Darshita Goyal
Beyoncé & Madonna’s “Break My Soul” Remix Honors A Group Of Black Icons
By Stephanie Topacio Long
August 2022 New Moon Do’s & Don’ts
By Brittany Beringer
Your Daily Horoscope For August 17, 2022
By Alexandria Lettman
Get Even More From Bustle — Sign Up For The Newsletter