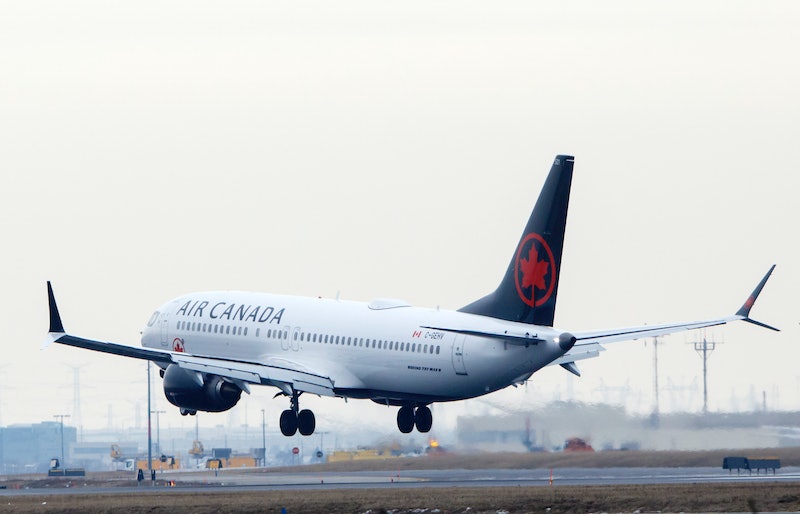 Passengers on Canada’s flag carrier airline will soon be hearing a different, more inclusive greeting when they come aboard: Air Canada will begin using gender-inclusive language during onboard announcements in the near future, reports the French language, Canadian news outlet La Press. Although the airline has not officially announced the shift in language yet, the Canadian Union of Public Employees (CUPE) did tell La Presse that they had received notification from Air Canada of “the new directive”; additionally, a spokesperson for Air Canada confirmed to CTV News Montreal over the weekend that onboard announcement are in the process of being “[amended] to modernize them and remove specific references to gender.” (Bustle has reached out to Air Canada for comment but received no response by press time; this piece will be updated if/when we hear back.)

La Presse broke the news on Saturday after obtaining an internal memo detailing the updated language standards. According to the outlet, phrases like “mesdames et messieurs” and “ladies and gentlemen” in onboard announcements on Air Canada flights are set to be replaced by gender-inclusive terms, such as “tout le monde,” a phrase which translates literally to “all the world,” but more colloquially means simply “everybody” or “everyone.” The use of this and other gender-inclusive language is part of the airline’s “commitment to respect gender identity, diversity, and inclusion,” per the memo as reported by La Presse. La Presse also noted that although the change has not yet been implemented, the Air Canada onboard announcement manual will receive a revision to reflect the updated language standards; staff will reportedly be informed when the new version of the manual is available and when to implement the changes.

A spokesperson for Air Canada confirmed the change to CTV News Montreal. (Bustle reached out to Air Canada for comment, but received no response by press time.) “We will be amending our onboard announcements to modernize them and remove specific references to gender,” the spokesperson said in an email, reported CTV. “We work hard to ensure all employees feel like valued members of the Air Canada family, while ensuring our customers are comfortable and respected when they choose to travel with us.”

The Canadian government officially began offering gender X as option on passports and other official identification documents for residents who identify as nonbinary on June 4, 2019. (Several provincial governments, such as those of British Columbia, Ontario, and Alberta, had already begun providing a similar option on driver’s licenses and other forms of ID earlier.) “Canadian citizens and residents deserve to be respected and have the opportunity to live according to their own identity,” the Government of Canada’s website noted in the announcement of the option’s availability. “As of today, individuals who do not identify exclusively as female or male can have an ‘X’ printed on their passport, travel document, citizenship certificate, or permanent resident card.” Any residents who would like to update their documents with gender X are able to do so without needing to pay a fee until June 4, 2020.

The internal memo informing Air Canada employees of the move to gender-inclusive language underlined the airline’s commitment to “[ensuring] an inclusive space for everyone, including those who identify with gender X,” La Presse reported.

Although there obviously remains a huge amount of work to be done for trans and nonbinary rights, this change is still a big step when it comes to normalizing gender-inclusive language — and, more importantly, acceptance and respect of all identities. And that can only be a good thing.

More like this
8 Charities To Donate To During Black History Month
By Alexis Morillo
25 Inspiring Quotes From Black Women To Celebrate Black History Month
By Kyli Rodriguez-Cayro and JR Thorpe
What The UK Blocking Scotland’s Gender Recognition Bill Means
By Sam Ramsden
24 History-Making Black Women You Probably Didn't Learn About In School
By Ayana Lage and JR Thorpe
Get Even More From Bustle — Sign Up For The Newsletter
From hair trends to relationship advice, our daily newsletter has everything you need to sound like a person who’s on TikTok, even if you aren’t.