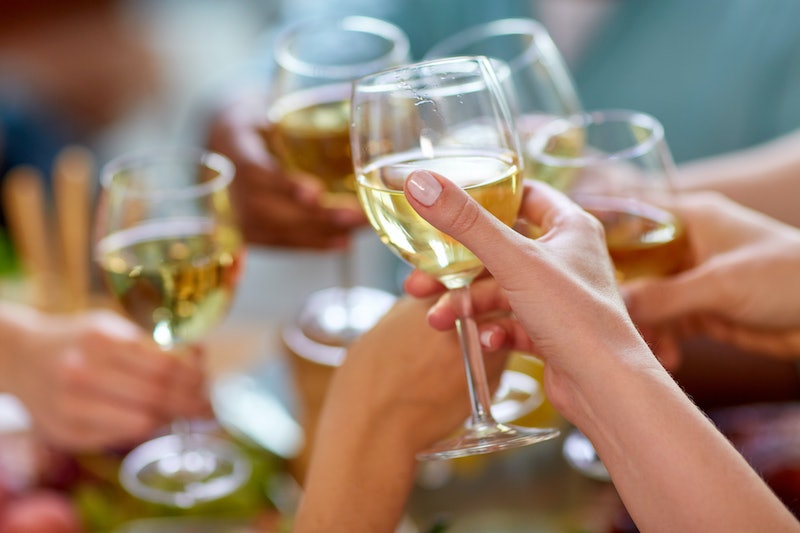 If you had to hazard a guess, which would you say is worse for our health: Alcohol use, or marijuana use? If you said marijuana use, I have bad news for you — you're wrong: According to new research published in the journal Addiction, regular alcohol use is worse for us than marijuana use is. (Then again, maybe that's actually good news for you, depending on how you feel about marijuana use more generally.) The research comes to us out of the University of Colorado Boulder’s Department of Psychology and Neuroscience — and honestly, that’s probably even less of a surprise than the actual results of the study are: Colorado legalized recreational marijuana use in 2012 with the passage of Amendment 64. I see what you did there, Colorado.

Previous research that has attempted to examine how cannabis use does or doesn’t affect the brain has been somewhat inconsistent in its results, according to Medical News Today. “When you look at these studies going back years, you see that one study will report that marijuana use is related to a reduction in the volume of the hippocampus. The next study then comes around, and they say that marijuana use is related to changes in the cerebellum,” said study co-author Kent Hutchison to the outlet. “The point is that there’s no consistency across all of these studies in terms of the actual brain structures.”

So, the researchers, led by Rachel Thayer, aimed to fill the holes in our knowledge by looking at existing brain imaging data in a new way: They examined the associations between marijuana use and both gray matter, which is mostly located on the surface of the brain and helps our neurons get the nutrients and energy they need to function, and white matter, which is located deeper in the brain and helps those neurons communicate — and they compared those associations with the associations between our gray and white matter and another substance about which we know quite a lot — booze.

It’s right there in black — or gray — and white: Alcohol use correlates with a loss of both volume and integrity of the two types of matter, which the researchers note can result in your brain have a much harder time functioning. Marijuana use, however, does not have this same correlation.

Interestingly, another recent study published by a different set of researchers in the journal Preventive Medicine examined how we perceive alcohol use versus marijuana use in terms of how good or bad they are for us — and it seems that a lot of us already know that alcohol probably causes more damage than cannabis does. Just over half of the respondents (52.5 percent) said that they thought alcohol is worse for us than marijuana, while only 7.5 percent said they believed the opposite. Even more interestingly, younger people were much, much more likely to say that alcohol was worse for our health

There were splits along party lines, too — 57.9 percent of Democrats,56.3 percent of Independents, and 61.5 percent of people who said they had no political affiliation said they thought alcohol was worse for us than marijuana. However, only 30.7 percent of Republicans said the same — which it probably to be expected, given that the current administration has recently taken steps that stand to put a serious roadblock in the way of the movement to legalize marijuana: In January of 2018, Attorney General Jeff Sessions reversed a policy set during the Obama era that allowed states to enforce their own marijuana laws. “In the controlled Substances Act, Congress has generally established significant penalties for these crimes. … These statues reflect Congress’ determination that marijuana is a dangerous drug and that marijuana activity is a serious crime,” read the memo that announced the reversal. “Previous nationwide guidance specific to marijuana enforcement is unnecessary and is rescinded, effective immediately."

A lot of the fear surrounding marijuana comes from the idea that it’s a “gateway drug” — although for what it’s worth, the literature doesn’t actually support this idea. Indeed, a previous study from 2016 actually found that it's more of an "exit drug" than anything else. And, as Vox pointed out in their big picture look at the research, “There is no good causal evidence for the gateway hypothesis. There is some weak correlation evidence, but it can be easily supported with an entirely different idea — drug users tend to start with more accessible drugs — over the gateway hypothesis.” Correlation is not causation, and although using any kind of substance does come with some “dangers,” the “gateway effect” isn’t one of them when it comes to marijuana.

And, apparently, neither is harm to one’s brain, as the University of Colorado Boulder’s research confirms. In light of both the growing body of research about cannabis and our country’s own history, I can’t help but wonder if, one day, we’ll look back at the times when legislation outlawed marijuana the same way we look at the Prohibition era now: As weird, draconian blips that make absolutely no sense. Only time will tell, I guess. But it’s curious to think about all the same.