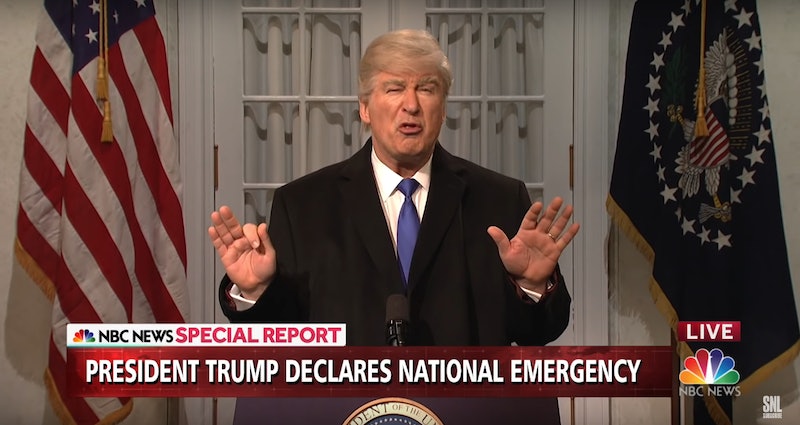 NBC's Saturday Night Live makes a habit of skewering the rich, famous, and powerful — including, and perhaps especially, whoever happens to be the President of the United States. Before President Donald Trump, presidents have largely taken this as part of the job, sometimes even welcoming it — but Trump is a notable exception. SNL's current Trump portrayer Alec Baldwin responded to Trump's latest tweet about SNL, making it clear that he believes the president went too far this time.

"Nothing funny about tired Saturday Night Live on Fake News NBC! Question is, how do the Networks get away with these total Republican hit jobs without retribution? Likewise for many other shows?" Trump tweeted on Sunday. "Very unfair and should be looked into. This is the real Collusion!"

Soon after that, Trump tweeted again, this time in all caps: "THE RIGGED AND CORRUPT MEDIA IS THE ENEMY OF THE PEOPLE!"

Trump has frequently tweeted negatively about SNL, even claiming in a December 2018 tweet that SNL's practice of criticizing him "should be tested in courts, can’t be legal." According to Baldwin, Trump's frequent invectives against SNL and, more broadly, the media, are creating a potentially dangerous situation for him, even if Trump didn't mention him specifically.

"I wonder if a sitting President exhorting his followers that my role in a TV comedy qualifies me as an enemy of the people constitutes a threat to my safety and that of my family?" Baldwin tweeted late on Sunday, after Trump had already criticized the SNL episode.

Trump has often referred to the media as the "enemy of the people," as he did in his Sunday tweet, even once making up the statistic that at least one-third of Americans agreed with him, as BBC noted. BBC also added that there is no actual evidence or polling to suggest that the statistic is true. While Trump's critics have to some extent become accustomed to this particular criticism of the media, it's worth remembering where it comes from. As The Guardian wrote, it appeared as far back as Shakespeare — but the first people to truly attach power to the phrase were 20th century dictators, most notably Joseph Stalin.

Numerous media organizations have told Trump, both directly and through the media itself, how dangerous they believe this sort of rhetoric to be. New York Times publisher A. G. Sulzberger met with Trump to convey that message in the summer of 2018, and then did so again early in 2019 after Trump's rhetoric towards journalists and the media didn't change.

Violence against journalists and the media increased significantly in 2018, according to a report from Reporters Without Borders. Most notable, of course, was the murder of Saudi journalist Jamal Khashoggi, which Trump was unwilling to criticize Saudi Arabia for even though the murder was carried out at the Saudi embassy in Istanbul. A bit closer to home, though, an attendee at a Trump rally attacked a BBC cameraman, and the attacker was caught on tape saying "F*ck the media!" The White House later condemned violence against members of the press, as The Independent reported — but Trump evidently hasn't changed his rhetoric. Perhaps Baldwin has reason to worry.