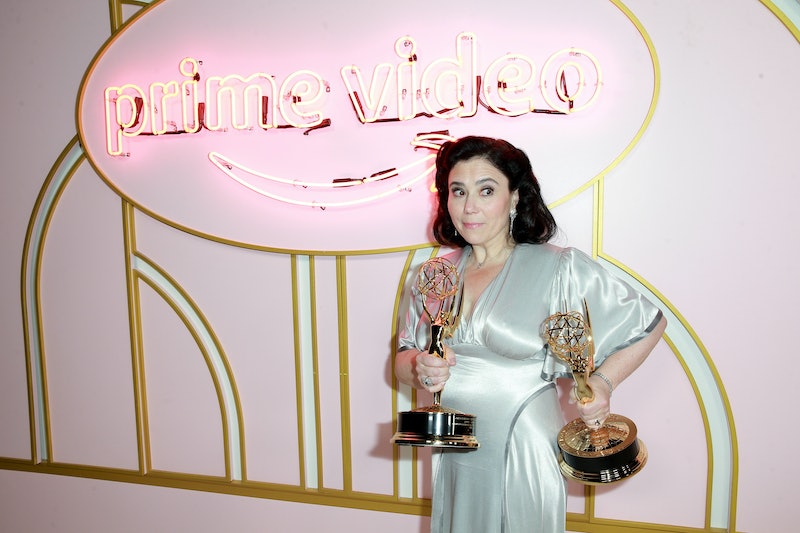 This is fashion recycling at its finest and most feminist! Alex Borstein's 2018 Emmys dress was actually her wedding dress from her now-defunct marriage to her ex-husband. What a powerful, beautiful, and absolutely glorious way to give brand new meaning to a garment that once represented a very different time and place in her life.

Borstein certainly "reclaimed" the frock by wearing it to a Hollywood awards show in which she received a massive professional accolade. She picked up the Emmy for Outstanding Supporting Actress for her work in The Marvelous Mrs. Maisel. Doing so while wearing the silver satin gown with loose and puffy sleeves effectively took its power back.

As PEOPLE reports, Borstein confirmed to Glamour during her red carpet interview that "this is actually my wedding dress," noting that it was "from 20 years ago."

Fashion is cyclical — looks come and they go. This dress certainly came back around again for Borstein in multiple ways. Rather than allow the pretty, still stylish, and not overly bridal looking dress to languish in the back of her closet with only its past purpose, the actor, well, repurposed it.

Borstein stated, "The marriage didn't last but the dress did and I wanted to give it new life so now it's my Emmys dress. That's the truth."

Seriously, how awesome is it for Borstein to be able to have such a renewed, refreshed, and modern perspective on a dress with such an inherent and previous meaning?

She didn't alter the dress' hem. She altered its history in the best way.

Borstein paired the silky-looking frock with a pair of white platform sneakers boasting black, white, and gray sole stripes. Those sneakers also have a totally '90s vibe. Borstein was basically #killingit at the 2018 Emmys.

On the red carpet, Borstein wore a matching, removable jacket with the dress. She also carried a plum-colored clutch, which added just the right pop of color to her neutral gown.

Borstein ditched the jacket when accepting her Emmy. During her speech, PEOPLE reports that Borstein did state that "I went without the bra." She clearly had several elements of fashion and getting dressed on her mind regarding the 2018 Emmys. She crushed it through and through.

Let's take a moment to marvel at the dress and its versatility.

Borstein's black hair, rosy cheeks, and pink-dusted lips were a terrific match for the silver dress. She will continue to look forward — not back.

Borstein was married to actor Jackson Douglas of Gilmore Girls. The pair wed in 1999 and finalized their divorce in 2017, as reported by PEOPLE.

Rather than passing the dress down to a relative, she gave it a new lease on fashion life in an unexpected way.

Alex Borstein's 2018 Emmys dress was feminism in fashion beyond a declarative phrase on a shirt.