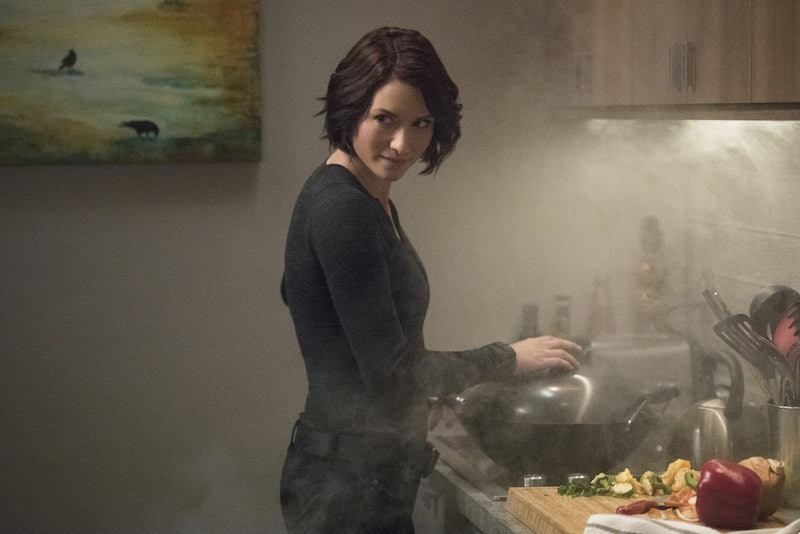 The high stakes of superhero shows make already dramatic television romances that much more fraught, so it's nice to see a relationship progress and work out for a change. One of the CW's most beloved 'ships worked out very well, in fact — Alex proposed to Maggie on Supergirl! The Season 2 finale had a lot of ominous cliffhangers, but at least this story ended in a happy place.

It seems like Maggie most likely said yes. She smiled, at the very least. So much for first relationships not ending well, huh? I kind of like that Alex's proposal was so sudden, and sincere. The end of an alien invasion is the perfect time to start thinking about the future and metaphorically tie down your loved ones. I can't wait to see Type A Danvers try to plan a wedding, as well. That'll be a fun framing device for Season 3.

Also, as much as I'm sure Kara is happy to see her sister happy — this is going to be a hard blow. After Mon-El was forced to literally evacuate the planet forever, thus putting a stopper in their relationship, Kara already ended the episode feeling like love was never going to happen for her. Almost all of her friends are in happy relationships, and now her sister's getting married? In the immortal words of Winn Schott, "Woof. No pressure."

That said, I don't want to take focus away from Maggie and Alex. This is a lovely turn of events, and a great way to end the season. I can't believe that Alex went from having no social life to a proposal in a year. Not only do Alex and Maggie clearly care about each other, but they make an excellent team.

Oh, and Cat Grant officially totally knows that Kara is Supergirl, right? She wasn't just talking to the TV? Gods, I hope so. While the Supergirl finale included plenty of heartbreak and and devastation, moments like this make fans more pumped for Season 3 than ever.