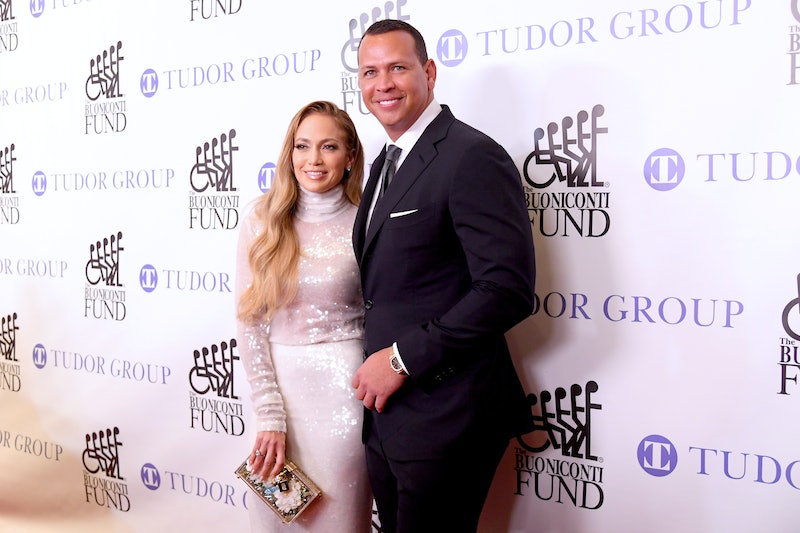 Long before they were J-Rod, Alex Rodriguez was one of Jennifer Lopez's many fans. And in an Instagram post on Thursday night, the former Yankees player revealed just how much he'd loved Lopez's work. Alex Rodriguez saved a signed headshot from Jennifer Lopez for 20 years, which just goes to show that you really never know what the future has in store.

Apparently, Rodriguez and Lopez found the signed photo while going through some things he'd kept tucked away in storage. It's pretty impressive that he saved the picture over all these years — and it's pretty sweet that it's in a frame. Lopez's signature appears to include the message "To Alex with love," though the singer had no idea just how much love she and Rodriguez would eventually have.

Rodriguez's Instagram caption is just as sweet. He wrote, "#TBT to almost 20 years ago when a big time global superstar signed a pic for a young ball player #lifecanbeafunnythingsometimes #pictureperfect #keepsake #jlo." And in terms of foreshadowing and just generally cute coincidences, it'd be hard to find a cuter throwback post.

Lopez reposted the photo on her own account, too. "Wow! Had to repost !!! I found this cleaning out storage !!" she wrote.

Of course, Lopez and Rodriguez probably didn't discuss the signed headshot when their paths crossed again last year. As the story goes, Rodriguez and Lopez ran into each other in Los Angeles, and they started dating after that.

Last March, E! News reported that Rodriguez and Lopez met in 2005, at a Yankees-Mets game. There weren't sparks flying back then — Lopez was with her ex Marc Anthony at the time. But there is photographic evidence of the two of them at the game together, taking pictures and shaking hands. Little did they know what the future held for the two of them.

Lopez and Rodriguez marked their one-year anniversary in February, and their relationship seems to be going strong. In an interview with Entertainment Tonight last month, Lopez praised Rodriguez for being so supportive of her Las Vegas residency. She told the outlet,

"Listen, to have a partner who's that supportive, who comes to that many shows — we all know what it's like to be in show business. It's a grind. It's being away a lot and he really makes the effort, so do I, to be there for each other, and it means a lot to me."

Rodriguez is definitely a supportive stage partner — he's been known to share posts about Lopez's concerts and performances on Instagram. Just look at this adorable photo of the two of them backstage (complete with Lopez's signature blinged-out Starbucks cup, naturally).

Based on Rodriguez's latest Instagram post, it looks like he's always been a J. Lo fan. And now that the two of them are a couple, he's even more supportive of her career — it's all super heartwarming. Not many couples can say they met decades before their relationship started, but the signed headshot just shows that these two really were meant for each other.