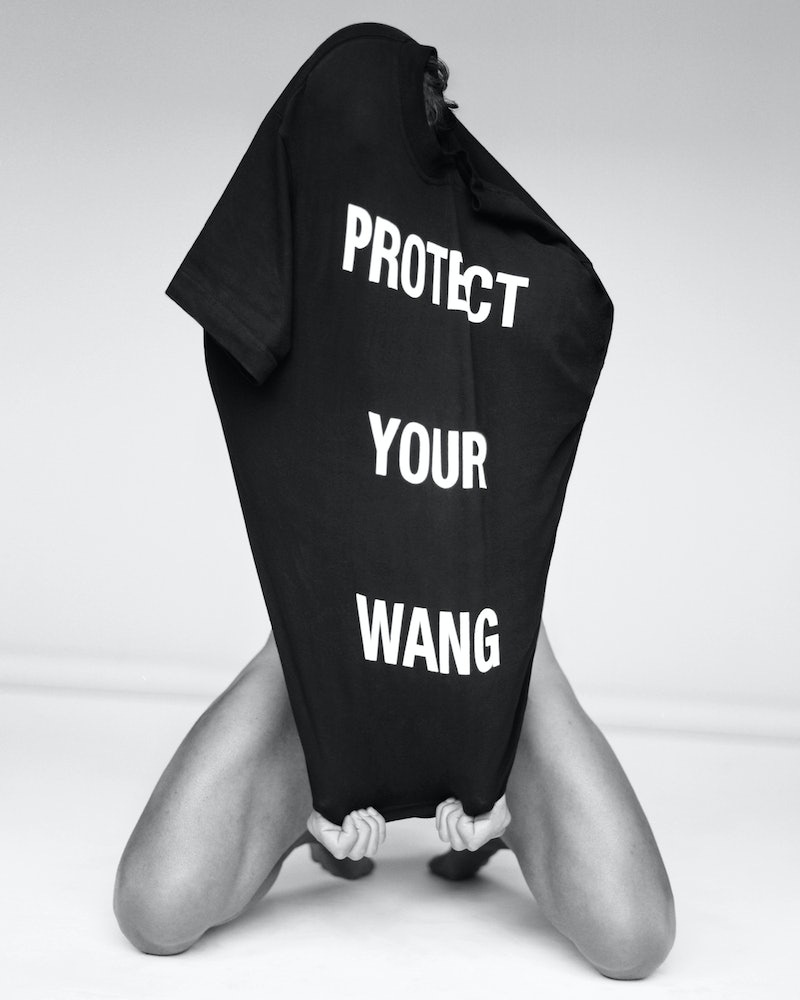 Some puns are just too good to pass up. You can only assume that's what fashion designer Alexander Wang and Trojan condoms thought when they decided to team up to raise money for the queer community again this year. The name for the collaboration, like last year's, is, fittingly, "Protect Your Wang" — because, well, of course, it is. But this year, in addition to doing a Pride float together, the designer and condom brand created a capsule collection. Together, Alexander Wang and Trojan will be donating a portion of proceeds from the collaboration to the LGBT Center of New York in honor of this year's Pride month. The proceeds from the capsule — which includes a t-shirt, hat, bandana, socks and co-branded condoms — will go to the sexual health programs the Center offers, to help promote LGBT-inclusive sexual health care. The products are limited-edition, but you can buy them online or at Alexander Wang's flagship store in SoHo, New York. If you can't wait to grab some, you can check out their Instagram page for more information. It's probably the chicest way out there to celebrate Pride Month — and it's for a really great cause.

The designer has made it clear that Pride is a cause and an event very close to his heart. “I reached out to Trojan last year to do something for Pride and we worked together on a really amazing float for the New York City Pride March," Alexander Wang tells Bustle. "This year, we wanted to take it a step further, so we’ve created a capsule collection that directs a portion of the proceeds to supporting inclusive sexual health programs at the LGBT Center of New York. The message of ‘Protect Your Wang’ is a strong statement and a fun take on engaging people around an important issue.” Plus, the products look pretty amazing. Sexy, bold, and simple, they're incredibly cool — whether you're putting them on your head or... anywhere else.

But the collaboration doesn't end there. For the second year running, Alexander Wang has designed a "Protect Your Wang" float for the NYC Pride Parade — which he'll be in, floating down the streets of NYC alongside 200 members of his squad. They'll be giving away condoms and other goodies to the people of New York.

“The Trojan brand has a long history of investing in inclusive public health programs and Alexander Wang is the perfect voice to help amplify our mission of providing resources that improve sexual health for all," Trojan Brand Director Stephanie Berez tells Bustle. "The ‘Protect Your Wang’ campaign amplifies an undeniably clever public health message within a purpose-driven initiative that celebrates Pride and supports inclusivity.” And they're putting their money where their mouth is.

If you can't make it to the store but still want to get your Pride on in NYC, the parade takes place on June 24 this year in New York. Kicking off at 12:00 p.m., it begins in the West Village at 16th Street and 7th Ave. But it's such a huge event that if you're anywhere in the area you won't be able to miss it — just follow the glitter and the cheers. And Wang has something extra special planned for this year. His float will draw on the feel of an industrial gym to give a sense of power and protection.

The idea of protection is crucial because even though Pride is a time for joy and irreverence, it's also an important reminder of the need for protection. Not just protection against STIs, but it's also a time for support and protection of the LGBTQ community, especially in such uncertain political times. So have fun, go wild, cover yourself in rainbows and glitter and the sweat of strangers but also, be safe.