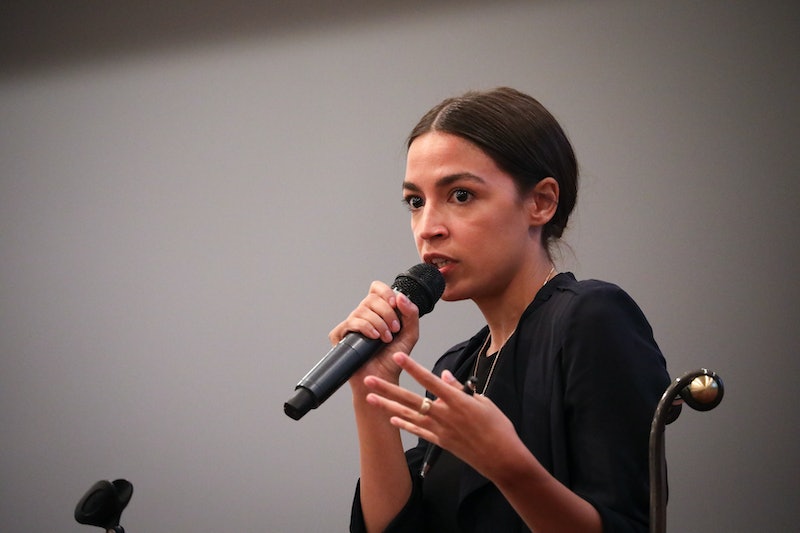 Earlier this week, the House of Representatives passed a bill expanding the federal background check system for all firearm purchases. However, a group of moderate Democrats joined Republicans at the last minute to add an amendment that would require immigration officials to be notified if an undocumented immigrant were to purchase a gun. In a series of Saturday tweets, Alexandria Ocasio-Cortez slammed the "splinter group of Dems" for tacking on the amendment and thereby amplifying the powers of Immigration and Customs Enforcement (ICE) officials.

"Mind you, the same small splinter group of Dems that tried to deny Pelosi the speakership, fund the wall during the shutdown when the public didn’t want it, & are now voting in surprise ICE amendments to gun safety legislation are being called the 'moderate wing' of the party," Ocasio-Cortez tweeted on Saturday.

According to The Washington Post, Ocasio-Cortez and House Speaker Nancy Pelosi both criticized the 26 Democrats who joined Republicans in adding the provision about ICE to the gun control bill.

“Vote 'no,'" Pelosi reportedly told Democrats, per her statement to reporters. "Just vote 'no,' because the fact is a vote 'yes' is to give leverage to the other side, to surrender the leverage on the floor of the House."

Ocasio-Cortez, meanwhile, further criticized the dissenting Democrats for forcing "the other 200+ members" of the party "into actions that the majority disagree with."

A vocal critic of ICE and the Trump administration's immigration policy, Ocasio-Cortez also rebuked the centrist group of Democrats for supporting a pro-ICE amendment without any warning. Following speculation that she had directly threatened to primary her fellow Democrats, Ocasio-Cortez clarified on Twitter that Democrats who broke away from their party were "inadvertently making a list of targets for the GOP and for progressive advocates on their pro-ICE vote."

"Again, didn’t threaten a primary," Ocasio-Cortez explained. "I was upset that 26 Dems forced the other 200+ to vote for a pro-ICE provision at the last min without warning. Because I think an agency that pins children down + forcibly injects them w/ antipsychotic drugs shouldn’t be given more power."

According to The Washington Post, Republican lawmakers have capitalized on this split between so-called moderate Democrats and the rest of their party, and will likely attempt to aggravate this split during upcoming votes on issues like climate change and health care.

Many of the 26 Democrats who teamed up with Republicans to implement the pro-ICE amendment were elected in districts that President Trump won during the 2016 presidential election, and these Democrats have argued that they will vote with their districts, per The Washington Post. But during closed-door meetings with her fellow lawmakers, Pelosi has reportedly warned that breaking with the party and siding with Republicans on such issues could have drastic consequences.

Ocasio-Cortez and Pelosi were not the only ones upset by the move, either. Human rights NGO Amnesty International tweeted on Wednesday that the amendment about ICE "is intended to instill fear in immigrant communities." The organization then proceeded to call on senators to remove the amendment moving forward.