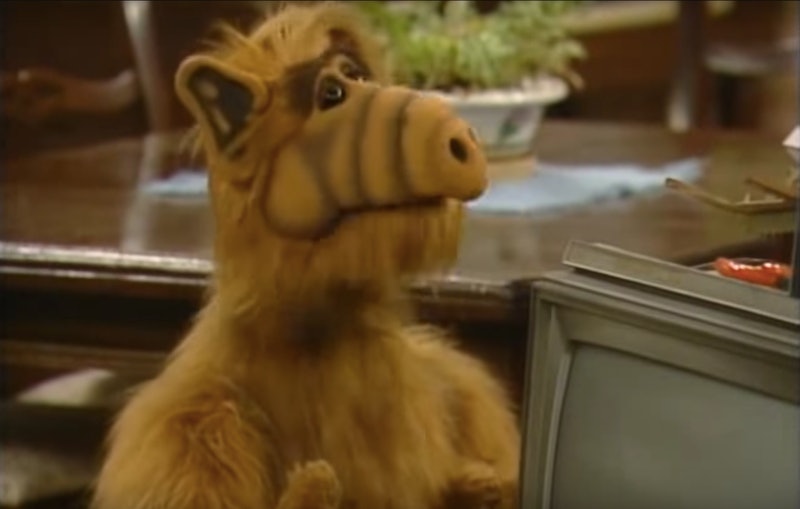 Despite being off the air for nearly three decades, the '80s sitcom ALF is reportedly being rebooted, leaving fans with a mixed bag of emotions about the friendly aliens' return television. (Warner Bros. had no comment for Bustle regarding the reboot.)

While many fans are excited about the possible revamp, there are many who feel Alf has no place in the currently overrun landscape of endless reboots. TV Line indicated that Warner Bros. is in the early stages of development, which leaves details surrounding the project pretty scarce at the moment. However, The Hollywood Reporter reveals that the series' updated revival would reportedly focus on ALF – aka Alien Life Form – as he returns to Earth to join a new family and will feature a whole new set of cast and characters.

The sitcom's original run, which was comprised of 102 episodes in total, aired over four seasons on NBC between 1986-1990 and focused on a sarcastic, cat-eating alien from the planet Melmac that crash-lands into the garage of the Tanner family. The Tanners allow Alf to live in their home and he ultimately becomes like a part of the family as they proceed to hide him from their neighbors and the Alien Task Force until he can repair his spacecraft and return home.

Although the narrative was certainly outlandish – even during the late '80s – news of the show's return seems to have some former fans overjoyed – while others are already in the process of hiding their cats and their reactions are simply priceless.

1. The Gif That Keeps On Giving

This fan is glad that the reboot news finally make their favorite gif "relevant" again.

2. Bring It All Back

Another commenter has their own ideas of brining back Alf's talk show.

Another Twitter-user just wants to be sure that the reboot is done right.

4. It's Going to Be a Total Cat-tastrophe

This person's cats are already tucked away.

Someone thinks that the Alf is one reboot that would really be a good idea.

Another commenter hopes that cats will finally get their "revenge" should the revival come to fruition.

Although not on board for a remake, this person does admit to being a fan of the '80s character.

Someone is simply in it for the possibility of a Game of Thrones crossover.

It looks like the announcement quickly turned some people's jokes into a reality and this person is ready to put the laughter to rest.

It seems that viewers aren't the only ones who mildly found the idea of a reboot to be a bit of a stretch. During the 2015 TCA press tour, NBC's entertainment chairman Bob Greenblatt joked that if the now-failed Coach reboot turned out to be a success, an ALF series could soon follow. However, it's worth noting that there is no network currently attached to the project.

Despite receiving mixed reactions with its reboot news, TV Line points out that Alf has remained a fixture in pop culture which has been referenced on a number of popular films and TV series throughout the years including: The Simpsons, Family Guy, The Big Bang Theory, Mr. Robot, Guardians of the Galaxy, and Hot Tub Time Machine.

It's unclear in what form the character will return as he was mainly played as a puppet that was voiced by the show's co-creator, Paul Fusco. In a handful of episodes, he was also portrayed by a 33-inch tall actor named of Michu Meszaros who wore a full-body costume to bring Alf to life.

Criticism aside, ALF's return may be just the dose of '80s nostalgia that fans of the decade need.