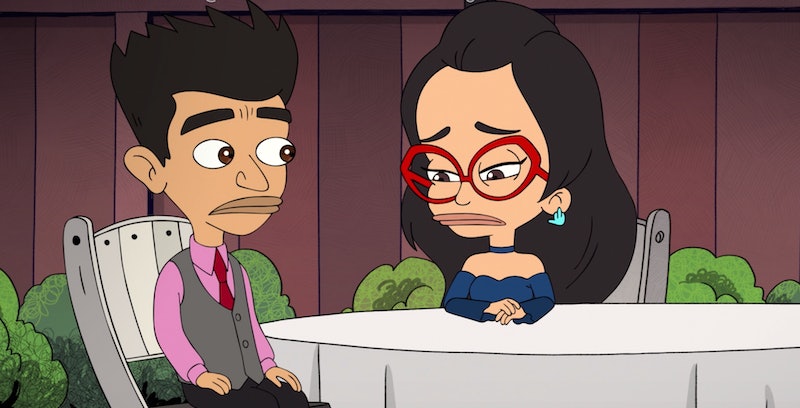 Spoilers ahead for Big Mouth Season 3. Big Mouth is one of the raunchiest shows on television, but also one of the most insightful when it comes to the world of sex and sexual identities. While much of the show's discussion of sex has fallen along heteronormative lines, Ali Wong's Big Mouth Character (also named Ali) introduces pansexuality to the world of Bridgeton Middle School. Ali enters Nick and Andrew's class like a wrecking ball, calling herself as a soccer-playing Ravenclaw, and offering a crash course in pansexuality to the class. Ali isn't the show's first pansexual character, as characters like Gordie the Pansexual Magician popped up earlier this season, but Ali is the first time that most of the show's main characters come face-to-face with someone who identifies as such.

Ali's sexual orientation becomes a hot topic of discussion, but the school's students don't quite grasp the concept as much as they fetishize it— with the exception of Jay, who perks up when he sees his friends openly talking about sexual orientation and gender identities.

Jay's journey to discover his sexual identity has been touched on throughout the series, but he doesn't decide to label himself until Ali arrives at the school. Seeing that his classmates are excited and intrigued by pansexuality, Jay decides that now is the moment to come out to someone other than the raccoon cater waiter from Episode 3. He expects everyone to be just as excited for him as they are for Ali, but what he hears instead is confusion, fear, and disbelief.

Preconceived notions about male bisexuality lead to Nick and Andrew all of a sudden thinking that Jay is "into them." They also tell Jay that bisexuality is "different" for men. Matthew, the show's main gay character, hurtfully tells Jay that he is simply a boy on a "pit stop to Gay Town," despite Jay's insistence that he wants to "f*** everyone."

Little Jay Bilzerian never gets a win and it really felt like his coming out was going to be a triumphant moment for him. Instead, faced with the same stigma as many bisexual men and women out in the real word, Jay feels misunderstood and unaccepted by everyone at the school. Except for Ali, who has been fending off girls trying to kiss her and people more interested in her sexual identity than anything else about her.

Representing these varying experiences is something Big Mouth creator Nick Kroll always hoped to do with his show. He told Esquire, "Being on Netflix has given us incredible opportunity to speak more frankly in a way that a lot of shows and movies haven’t been able to. On top of that, I think we still have a responsibility to tell as many different kinds of story around puberty as possible."

Jay and Ali's struggles with coming out as bi and pan, respectively, are indicative of real life stigma LGBTQ people often face, even within their community. While it's hard to watch characters you adore suffer, they're both necessary stories to tell.