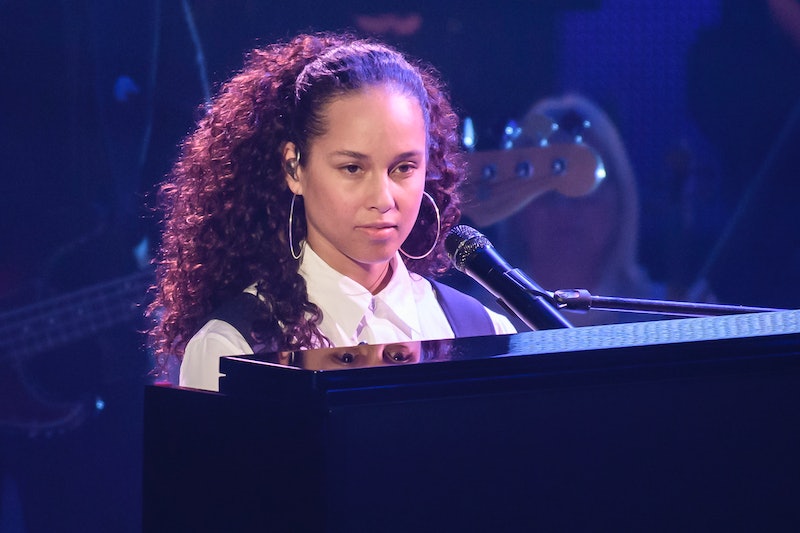 Saturday's March on Washington has been full of stunning moments, from acclaimed journalist Gloria Steinem's powerful speech to Ashley Judd's fearless praise of "nasty women." As amazing as all of the speeches have been, seeing Alicia Keys recite Maya Angelou's "Still I Rise" was unforgettable. Keys sampled Angelou's iconic poem and combined it with her own message to create an intersection between the past and present that was palpable.

Keys performed a song for the crowd as well, but nothing could top her call to action. It was clear from the moment she took the stage, Keys was fired up, and she barely needed a microphone for her voice to ring out across the crowd. Angelou's "Still I Rise" is about her endurance and pride as a black woman. It is as timeless and applicable today as it ever was.

While the acclaimed singer did not read Angelou's entire poem, she chose one of the most stirring passages to share with the crowd:

Out of the huts of history’s shame / I rise / Up from a past that’s rooted in pain / I rise / I’m a black ocean, leaping and wide / Welling and swelling I bear in the tide / Leaving behind nights of terror and fear / I rise / Into a daybreak that’s wondrously clear / I rise / Bringing the gifts that my ancestors gave, I am the dream and the hope of the slave / I rise

Angelou passed away in 2014, but she lived long enough to receive the Medal of Freedom from President Obama. She was an artist, a poet, and a civil rights activist who lived through segregation and the Civil Rights Movement. While she did not live to see the thousands of people gathering across America in the name of human rights, Keys made sure her presence and her enduring spirit were felt at the Washington event.

As she spoke, Keys tapped into the anger, the defiance, and the unwillingness of Americans to give up the fight for what they believe in. She interwove the call for women to continue to rise with a rallying cry for all the rights they would not stand to be stripped away from them. "We will not allow our bodies to be owned and controlled by men in government, or men anywhere for that matter," she said. "We will not allow our compassionate souls to get stepped on. We want the best for all Americans, no hate, no bigotry, no Muslim registry."

As a whole, the marches feel like the beginning of something revolutionary, and Keys found a way to put into actionable words what that revolution is about. It is a revolution of love, of not being controlled by fear or hate, of not being defined by gender. There was so much power in Keys' voice, and that power spread as she continued to speak.

No one can speak for Angelou, but I suspect she would be proud to see her poem once again inspiring women across the land to rise up.

More like this
Britney Spears Shares Unknown Details Of Conservatorship In New Voice Notes
By El Hunt
Women Around The World Are Cutting Their Hair In Solidarity With Mahsa Amini
By Darshita Goyal
Black Women's Equal Pay Day Highlights An Upsetting Problem
By Brandi Neal
Even If She Tried, Beth Ditto Couldn’t Stay Away From Music
By Ivana Rihter
Get Even More From Bustle — Sign Up For The Newsletter