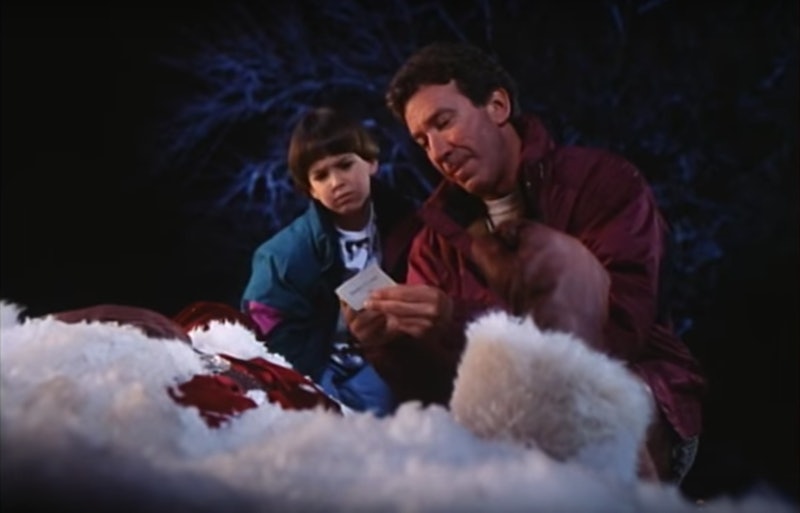 Just in time for the holiday season, all three Santa Clause movies are heading to Netflix on Dec. 12. This is especially big news for '90s kids, because while there are plenty of Christmas classics that fans love — A Christmas Story, Elf, and It's A Wonderful Life — there are few more enduring than the Santa Clause trilogy, three movies that spanned the formative years of early childhood. Also, there's even more good news: The full list of what's coming to Netflix in December drops on Monday, Nov. 20.

The Santa Clause is exactly the kind of story that symbolizes what the holidays should be about, tracing the heartwarming, feel-good tale of a cynical executive (Tim Allen) who, thanks to the spirit of Santa Claus, becomes a loving, committed father to Charlie (Eric Lloyd), his very adorable young son. The sequels aren't quite as sentimental, but they're certainly packed with Christmas hijinks, and nonetheless make for a light, enjoyable watch.

Of course, the year-end TV slate is notoriously dry, and while the movie theater usually boasts lots of holiday-themed options, you may want to stay in and cozy up on the couch. If you're committed, you can blaze through the Santa Clause movies pretty easily in half a day — in total, their run time is roughly five hours — so you may find yourself in search of a few more titles to add to your Netflix marathon.

The following festive films are already currently on the streaming site.

Though admittedly tailored toward a younger audience, Dr. Seuss' How The Grinch Stole Christmas is Jim Carrey at his finest. And besides, there's no time like the holidays to relive your childhood.

A Nightmare Before Christmas is on the darker side, but it's nonetheless beloved, and it's a good way to scale back from all that festive cheer and prevent holiday overload.

If you don't want to make a trip to the cinema for A Bad Moms Christmas but still want something a little more grown-up, Bad Santa is a solid alternative. It's profane, funny, and unapologetically outrageous, but still manages to have a little heart. (Bad Santa 2 is also on Netflix if you want to make it a double feature.)

The Very Murray Christmas cast is as star-stacked as they come: Bill Murray, Michael Cera, Amy Poehler, George Clooney, Maya Rudolph, and Jenny Lewis are just some of the famous faces that pop up in this musical comedy, and it's directed by the unparalleled Sofia Coppola to boot.

For those who like their holidays old-school, A White Christmas delivers. Michael Curtiz's 1954 gem stars Bing Crosby, Danny Kaye, Rosemary Clooney, and Vera-Ellen as four performers who team up to drive business to a failing Vermont Inn and fall in love along the way.

OK, Gremlins might not fall into the traditional holiday genre, but it does follow a young boy who receives the Christmas gift from hell, and why not spice up your marathon with some classic '80s horror?

Whether you watch them all in one sitting or spread them out from night to night, this motley crew of movies should get you through the holidays. Turns out, the Santa Clause movies are the perfect excuse to take a trip down memory lane and forget the trash fire that was 2017. And another bonus? Having an agenda should help you avoid those awkward family chats about why you're still single and what it is you're doing with your life. Happy viewing!