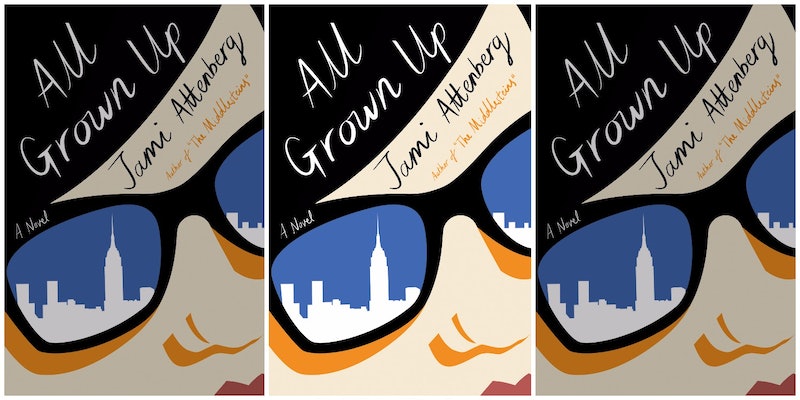 One evening last fall, my roommate and I watched the movie How To Be Single. I knew I’d hate it, and I was right. I hated it for multiple reasons, chief among which is this: these movies are inevitably not about being single at all. They are about navigating romantic relationships until you find The One.

Luckily, I was between novels, and the next one on my nightstand was an advance review copy of Jami Attenberg’s All Grown Up (March 7; Houghton Mifflin Harcourt). I knew from following the author on social media that this was not a book that would enrage me as those movies do. That this was book which tackled singleness with the kind of nuance such a subject deserves.

The novel’s main character, Andrea, isn’t very much like me. Where she has given up on her art, I am still doggedly pursuing my creative dream and refusing to let the constant rejections dull my love of writing and my desire to one day be a published novelist. Andrea’s relationships with men are very different from mine, and so is her family.

But in relation to her singleness, despite how different that singleness looks for each of us, Andrea and I are similar. She doesn’t want a relationship, or she’s given up on one, or she’s been on her own for so long that she’s afraid of them or isn’t sure she knows how to even start one, let alone how to make them work.

Maybe I’m projecting. Marriages are something other people have. They’re a whole world of mystery to me. (How do you not get bored of each other? How does someone else’s morning breath not make you want to gag? How is it okay that the friends you’ve known for a decade or more, with whom you have shared hotel rooms and meals and secrets and struggles and too many drinks, are relegated to afterthoughts because this other person whom you have only just met happens to have a particular appendage?)

Even as some of you are reading this, you’re fighting the urge to tell me: you’ll find someone! But the thing is: you don’t know that. Mathematically, realistically, not all of us get that person. And there’s been little evidence in my life so far that men are willing to defy those odds and fight for me.

And why is it that you want to rush to tell me that? Is it because you want me to be happy? Then interrogate your assumptions behind that. Is happiness dependent on a spouse or a partner?

No, no. Of course not, you say. This is the 21st century. I’m reading Bustle. Of course I don’t think that.

But the people who make movies and the people who write books and the people who publish books believe it. They must. Look at the output. Look at Bridget Jones’ Diary – which I loved and laughed at like the best of us. Bridget is the ultimate singleton, whose every day is focussed on finding and keeping a man. Who, despite her utterly disastrous life, not only has Colin Firth so interested in her that he makes her blue soup, but also Hugh Grant, who, yes, turns out to be a scumbag, but is also undeniably handsome.

Right, you say. But that’s commercial fiction. Literary fiction isn’t like that.

Last summer, I read an excellent novel about a friendship between two women, one single and one married. This book got me. I felt understood. I had such high hopes for it. It was heading to be the best book I’d read all year. And then, of course, the novel ended with the single friend finding a man.

Because how else do single people’s stories end?

I will grant you that Jami Attenberg’s Andrea is not particularly happy. But neither are many people in bad or mediocre marriages, or in perfectly okay marriages but stuck with seeming endlessness in the toddler phrase. And maybe Andrea would be happier if other people stopped trying to define her by her singleness. “Why is being single the only thing people think of when they think of me?” she asks her therapist. “I’m other things, too.”

It seems that we can refuse all we like to be defined by our relational status, but society will define us that way anyway. That’s why one of All Grown Up’s earliest reviewers, apparently missing the point of the novel, used the phrase "still unmarried."

But more tragic for me than Andrea’s singleness was something else entirely. She loves to sketch the Empire State Building, which she can see from her window. She does this every day. And then the developers come, a building goes up, and she loses her creative outlet. There are sadder things in the novel, but this is the one that really punched me in the gut.

Thank you, Jami Attenberg, for pushing back against society’s assumptions about what is allowed to matter in our lives. For giving us a different kind of narrative. All Grown Up is not all fluffy and lovely. It turns out that we have other stories — we single people. We human beings.