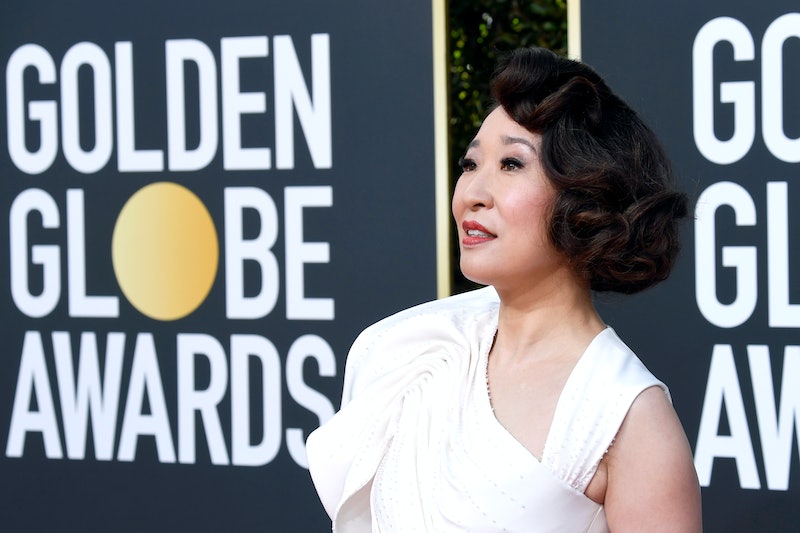 Sandra Oh and Andy Samberg's monologue on Sunday night was packed with tons of sharp jokes and good-natured teasing. But the end of Sandra Oh's 2019 Golden Globes monologue closed things out on a serious note. As she wrapped up her time onstage, the host told the audience exactly what it meant for her to be standing in front of them.

"I said yes to the fear of being on this stage tonight because I wanted to be here and look out onto this audience and witness this moment of change," Oh said. "I'm not fooling myself. Next year could be different and probably will be. But right now, this moment is real. Trust me, it is real. Because I see you. And I see you, all these faces of change, and now so will everyone else." Earlier in the speech, the duo's jokes touched on some of these diversity issues in a much more light-hearted fashion, like when they said the movie title First Man described how studios picked which directors to work with.

The Killing Eve star, whose parents were in attendance at the Golden Globes with her, was no doubt talking about the slew of diverse actors and creators nominated for their work this year. Oh has previously said that she wasn't interested in delving too much into politics during her night as showrunner. Instead, she told The Hollywood Reporter, she wanted to focus on progress.

"What I'm interested in is pointing to actual real change. I want to focus on that, 'cause people can pooh-pooh Hollywood all they want — and there is a lot to pooh-pooh, sure — but we also make culture," she said. "How many gazillions of people have seen Black Panther and Crazy Rich Asians? That changes things. Just speaking for my own community, people cried a lot in [Crazy Rich Asians], and it's not only because it's a great story and a classic romantic comedy — it is because seeing yourself reflected onscreen is really emotional when you don't even know that you're carrying so much grief of never being seen."

Recognition for the films Oh mentioned above, as well as others like BlackKkKlansman, certainly show that progress is being made, but there's also still a long way to go. According to the Boston Globe, male directors outnumbered female directors 22 to 1 in 2018. And in the aforementioned Hollywood Reporter piece, Oh acknowledged that real change in Hollywood will be slow-moving. "It's OK for it to wax and wane. Change is really, really slow. Time will tell," she continued. "But if the writers and the helmers are interested in moving the cultural story along, the audience will come with you."

According to Buzzfeed News, Oh is the first person of Asian descent to host the Golden Globes, so before she uttered a word onstage Sunday night, she was already doing her part to move things forward. As Oh said, only time will tell how things progress from here, but the importance of her presence during the ceremony was definitely not lost on her.