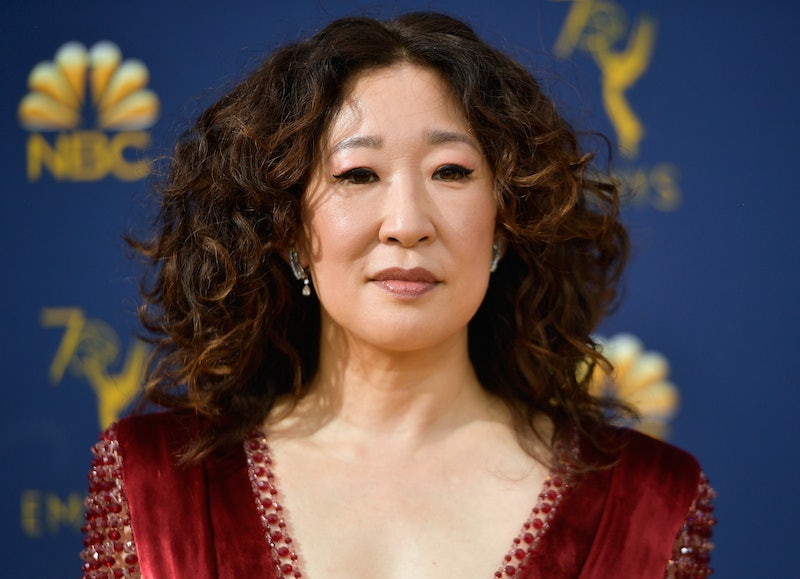 The Golden Globe Awards will be a major night for host and nominee Sandra Oh, and she's preparing for the big event in the sweetest way. On Sunday, Jan. 6, Sandra Oh posed for an iconic photo with her family, and it's an adorable tribute to everything she's accomplished not only in the past two years, but throughout her career.

Oh is co-hosting the awards show with Andy Samberg, and she's also nominated for Best Actress in a Drama TV Series for her role in Killing Eve. However, before she gets the evening underway, she made time to share photos of herself surrounded by her supportive family as they all wear a T-Shirt printed with her now famous quote from the 2018 Emmys: "It's an honor to be Asian - Sandra Oh."

On Twitter, the actor included a special message for her relatives along with the picture. Oh wrote, "Thank you beloved family (ps—why are mom and dad not looking at camera?)."

Though usually private, Oh recently discussed her family life and upbringing in an interview with The Guardian. The star's parents came to North America after the Korean War, and she was raised in Ottawa, Canada. Her father was an economist and her mother a biochemist, while her siblings pursued more conventional careers in law and medicine. Oh started out in Canadian television and worked hard for years before appearing in Grey's Anatomy. In the interview,the Killing Eve actor also addressed the painful lack of diversity for Asian-Americans on screen. "There aren't enough — not anywhere near — Asian-American faces up there to represent our population," she said.

Her role as co-host of the 2019 Golden Globes is an acknowledgement of the actor's achievements onscreen, as well as a celebration of the trail she's blazing for young actors who no doubt look to her for inspiration.

On Wednesday, Jan. 2, Oh discussed her reaction to being named host and the pressure of the gig in an interview with People. "My reaction was, 'Is this a joke?'" she told the outlet. "And then when it was not a joke, it was just this feeling of terror and thrill. There was no way I would do this without Andy. It's really exciting.”

Samberg and Oh might remind fans of another iconic comedy team, as they are the first co-hosts of the event since Tina Fey and Amy Poehler in 2013. Fey and Poehler are considered among the best Globes hosts, and while excited, Oh hesitated to put her partnership with Samberg on the same level, according to People. "I am leery to put the duo-ness anywhere near Tina and Amy,” she said. "I think Andy and I are just going to find our way and do our own thing. Andy is so seasoned. I am not in that realm. I really just want to hang out with him, onstage, in front of millions of people!"

Even if she's a little nervous about her hosting gig, Oh is surrounded by support from her family and colleagues. On Sunday, her Grey's Anatomy and Under the Tuscan Sun co-star Kate Walsh tweeted, "How I’ll be looking at @IamSandraOh on TV tonight Can't wait to see u kill it hosting the #GoldenGlobes, lady!!" Her Tweet was accompanied by an adorable gif of the two together.

The evening is going to be a landmark moment for Oh and her family, as well as a significant moment for representation in Hollywood. The actor has become a major force in the industry, and hopefully both her role in Killing Eve and her hosting gig will signify a continued shift toward greater inclusivity onscreen. No matter what, her pre-Globes photo proves this amazing actor has an incredible team cheering her on.