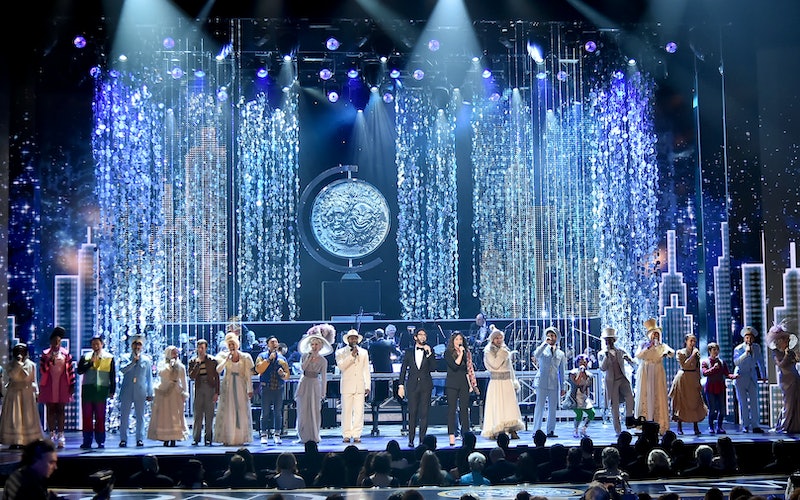 Every year, between the glitz of the Oscars and the glamour of the Emmys, come the Tony Awards. But before you tune in, you might want to know who the 2019 Tony Award nominees are. The annual theater honors may not be as populist as the big film or TV ceremonies, given that you actually have to go to New York City in person to see the nominated shows and performances (and be able to afford a ticket). But for theater obsessives, the Tony Awards are still an essential stop on the yearly circuit — there just might be a little bit more research involved in getting to know who's up for what award and who's likely to win.

The year's big ticket item is the new musical Hadestown, a folk retelling of the myth of Orpheus and Eurydice; with 14 nominations, it's the most-nominated show since Hamilton raked in 16 nods three years ago. (It even earned four more nominations than last year's blockbuster production Harry Potter and the Cursed Child.) On the dramatic side of things, the three-act Irish family saga The Ferryman pulled in a field-leading nine nominations, including Best Play and Director; Aaron Sorkin's new adaptation of Harper Avery's To Kill A Mockingbird matched it in total nominations, but was left out of the Best Play category — by far the year's most shocking snub. (It's almost surely the most-nominated production to fall short of the top category in quite some time.)

As for individual performers singled out by the American Theatre Wing, movie and TV fans will see plenty of faces they recognize, including recent Oscar nominees Adam Driver, Laurie Metcalf, Bryan Cranston, and Annette Bening, and TV stars like Jeff Daniels, Ruth Wilson, and Santino Fontana. Here's the full list of nominees, as well as a few hunches about who might emerge victorious when it's all over.

With its impressive nominations haul, Hadestown should have enough support to pull off the win — not to mention an eerily prescient song called "Why We Build The Wall," originally written many years before the Trump presidency. But in the era of Green Book over Roma, beware the much more traditional Tootsie pulling an upset.

The sprawling historical epic The Ferryman should be respected enough to pull off the win here, but the topical one-woman show What The Constitution Means To Me — a finalist for the 2019 Pulitzer Prize for Drama — has a fair shot, too.

3. Best Revival Of A Musical

With only two nominees in this sparse category, you could pretty much flip a coin and stand a good chance of getting it right. But you don't have to, since the drastically re-imagined Oklahoma! is far and away one of the year's most buzzed about productions.

4. Best Revival Of A Play

This is the toughest call of the top four categories. It could easily go to the star-studded revival of the gay classic The Boys In The Band or to the heart-wrenching Alzheimer's drama The Waverly Gallery, but the new production of Arthur Miller's classic All My Sons seems like a safe bet.

5. Best Performance By A Leading Actress In A Musical

You don't have to believe in life after love to believe that, after three nominations, Stephanie J. Block will finally take home her first Tony for her performance as the titular iconic singer in The Cher Show.

6. Best Performance By A Leading Actor In A Musical

Crazy Ex-Girlfriend and Frozen alum Santino Fontana has earned rave reviews for his performance in Tootsie as Michael Dorsey, the character who earned Dustin Hoffman an Oscar nomination back in 1982. Hoffman lost the Oscar, but Fontana should win the Tony for his star-making turn.

7. Best Performance By A Leading Actress In A Play

Metcalf is one of only six performers in history to win two consecutive Tony awards in back-to-back years. She's also one of a whopping four Oscar nominees in this stacked category, including Bening (20th Century Women), McTeer (Albert Nobbs), and Elaine May, who has been nominated by the Academy twice for screenwriting but never for acting. It's about time the legendary comedian receive recognition for her acting talent in addition to her trademark writing wit.

8. Best Performance By A Leading Actor In A Play

Star Wars fans will delight to see Kylo Ren himself nominated in this category for his performance in the revival of Lanford Wilson's play, but the recent Oscar nominee will likely cede this award to one of two heavyweights: either Emmy-winner Daniels, who reunited with Newsroom writer Aaron Sorkin for To Kill A Mockingbird; or Emmy-winner Bryan Cranston, in the same role that earned the late, great Peter Finch an Oscar in 1976.

9. Best Performance By A Featured Actress In A Musical

Before she became the first performer in a wheelchair to ever appear onstage in all of Broadway history, Ali Stroker rose to prominence for her stint on The Glee Project and her subsequent guest appearance on Glee. She gained lots of new fans this year, too, thanks to the rave reviews she received for playing Oklahoma!'s iconic Ado Annie.

10. Best Performance By A Featured Actor In A Musical

It's hard to imagine the rapturously received Hadestown going home without a single acting win, and its most likely victory comes in this category, thanks to André De Shield's performance as Hermes, the audience's lively narrator and tour guide to the Underworld.

11. Best Performance By A Featured Actress In A Play

Wilson recently won a Golden Globe for her starring role in The Affair and will soon appear on HBO's hotly anticipated His Dark Materials, but she'll likely concede this category to Celia Keenan-Bolger, who should finally win after four nominations. The role's quite a stretch, too; the 41-year-old actress portrays six-year-old Scout in Sorkin's adaptation.

12. Best Performance By A Featured Actor In A Play

Controversial media moguls are hot in fiction right now, thanks to HBO's Succession and the upcoming dueling Roger Ailes biopics; Bertie Carvel could benefit from that and win for his portrayal of Rupert Murdoch.

13. Best Direction Of A Musical

In 73 years of Tony history, only 19 women have been nominated in this category — and only three have won, The Lion King's Julie Taymor being the first in 1998. It will be a travesty if Hadestown's Rachel Chavkin doesn't become the fourth.

14. Best Direction Of A Play

Surprisingly, more women (six) have won for directing plays than for directing musicals; but that number doesn't have a chance of going up this year, since there are no women nominated. Oscar winner Sam Mendes (American Beauty) should take this home.

While Hadestown will likely sweep many top categories, this is one place for more traditionalist voters to honor Tootsie and its fast-paced dialogue and witty zingers.

16. Best Original Score (Music And/Or Lyrics) Written For The Theatre

Folk singer Anaïs Mitchell is almost certain to prevail in this category for turning her own 2010 album into the most-nominated production of the year.

While smart money is probably on the orchestrators of Hadestown for turning a solo album into a full-blown musical, this could also go to Oklahoma! for transforming Rodgers & Hammerstein's classic melodies into beautiful, almost unrecognizable folk ballads. Hearing these versions is like hearing the songs for the first time.

Kiss Me, Kate is a much more traditional revival compared to Oklahoma!, but this is one place voters could easily throw it a well-deserved bone.

19. Best Costume Design Of A Musical

Costume design doesn't get much more fabulous than the outfits conjured up for The Cher Show.

20. Best Costume Design Of A Play

Gary is one of the weirdest of all the nominees this year, but the bizarre Nathan Lane comedy could land a win for its eclectic costuming.

21. Best Lighting Design Of A Musical

This is one of only three categories that the big-budget adaptation of King Kong managed to make a dent in… but the beloved Hadestown will likely topple the King of the Apes from his perch atop the Empire State Building.

22. Best Lighting Design Of A Play

The lighting designers of Network had their work cut out for them thanks to the production's prodigious use of giant TV screens and live broadcasts, and they'll likely be rewarded for their efforts.

23. Best Scenic Design Of A Musical

Like King Kong, the adaptation of Beetlejuice is another high-profile project that will likely go home empty-handed, despite its eye-popping blacklight sets. This category will probably also go to Hadestown, hand-in-hand with its Lighting win.

24. Best Scenic Design Of A Play

The team behind Gary built an entire set out of mutilated corpses, but that might prove to be too gruesome for Tony voters. This category will probably go to The Ferryman for its lovingly detailed recreation of a period Irish home.

25. Best Sound Design Of A Musical

If Ain't No Proud goes 0-for-12 on the night, this musical about The Temptations will join Mean Girls as one of the losing-est shows in Tony history. But, for lack of a better grasp on the intricacies of the Sound category, it's probably safest to go with the frontrunner in the top category, Hadestown.

26. Best Sound Design Of A Play

Choir Boy, the new play from Moonlight's Tarell Alvin McCraney, is the rare non-musical to feature some song-and-dance routines, and love for the playwright could push for an upset here. But once again, it's safest to go with the frontrunner, The Ferryman.

Will tradition or innovation be the name of the day? Find out when the envelopes are opened during the 73rd annual Tony Awards, hosted by James Corden on Sunday, June 9.