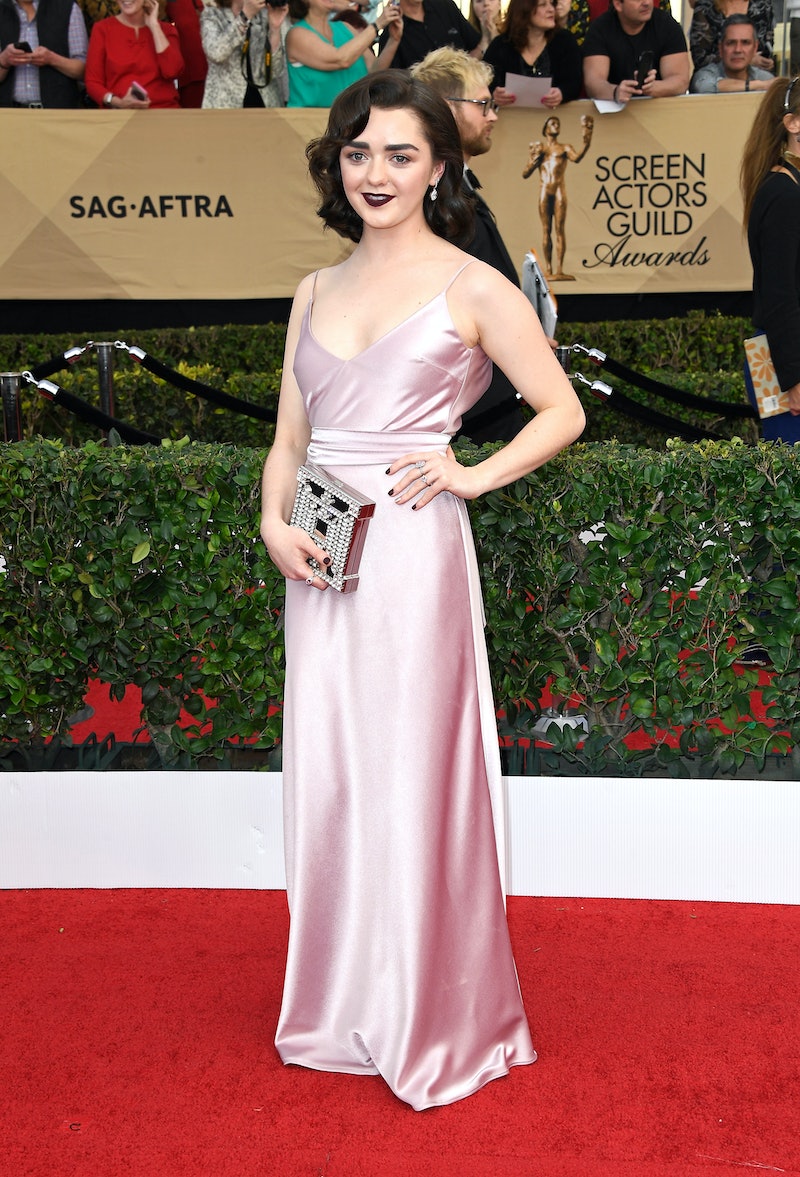 We knew the 2016 awards show season was going to be a tough fashion act to follow, but 2017 broke out of the gate strong with the fantastic looks on the 2017 Golden Globes red carpet. And now all the looks from the 2017 SAG Awards red carpet have set the bar even higher.

The SAG Awards span film and TV, so fans are treated to the best of both worlds. This year, Netflix's original TV show darlings Stranger Things and Orange Is the New Black were both in the running for Outstanding Performance by an Ensemble in a Drama Series, so we knew to expect wardrobe perfection not only from Ryder and Brown, but also from Uzo Aduba, who has a long history of being totally, absolutely gorgeous at every awards show she attends.

Then of course there's Fences, which was up for three awards including an Outstanding Performance by a Female Actor in a Supporting Role nom for Viola Davis. Davis' 2017 Golden Globes dress was a drop-dead beautiful slice of sunshine, getting fans' hopes up that her SAG dress would be just as much of a showstopper.

After the SAGs and the Golden Globes, it's hard to imagine how the rest of 2017's awards season can get better than this. Here are all the looks from tonight's festivities.

It looks like Felicity Huffman has got some pretty awesome decisions to make — and it's adorable that husband William H. Macy is getting in on the fun.

Sterling seems to be making the sunglasses a red carpet staple this season.

The Orange Is The New Black star looks like an actual queen.

The breakout Stranger Things star is the youngest person to ever be nominated, and her headband is very, very cute.

The Boys From Stranger Things ‌

There's nothing like a group of feisty kids in fancy clothes — and those blue shoes are an epic red carpet choice.

It's hard to mentally process how beautiful Maisie Williams looks.

The Transparent star is absolutely slaying in this royal blue gown.

Spencer was nominated for Hidden Figures, and she is looking incredible tonight.

The former The Office star looks adorable in this cocktail dress with a tulle skirt.

Bush wore an electric pink gown and eyeshadow to match.

The star of Netflix's The Crown looks absolutely stunning in this Valentino gown.

Newton's gown is absolutely divine — and certainly a standout on the SAG Awards red carpet.

Davis is a vision in this white column gown with a short train.

Kate Hudson did not come to play in this Dior gown.

The comedian and actor's checked jacket is a welcome departure from the classic tux.

The actor looked incredible in a shin-length cocktail dress with jewel-encrusted bodice.

Teigen kept it simple in an amazing black gown with a suit-inspired bodice, a deep neckline, and a thigh-high slit. Damn, girl.

The Black-ish star wore a bold striped gown and looked like a dream.

No one wears this color as well as Nicole Kidman, and she took it all the way to the next level.

Meryl wore a gown that feels totally different than her usual choices, in the best possible way.

Paulson wore a monochrome look, and that structural blazer with caped sleeves is everything.

Does Kerry Washington ever not give it her everything on the red carpet?

The Orange Is The New Black star slayed in a black and white colorblocked gown.

Louis-Dreyfuss wore this black, embroidered gown and looked like a dream.

The Hollywood legend kept it chic and simple on the SAG red carpet.

Henson wore a blush gown with delicate details, and you can tell she was truly feeling herself.

There's always room for a chic black gown on the red carpet, and Ross brought style in spades.

This floral tea-length gown is absolutely stunning, and Wiley is rocking it incredibly well.

Portland looked like a dream in this white, floaty gown.

Wood knocked it out of the park with this epic blue velvet suit.

This blue suit almost puts a forcible smile on your face, doesn't it?

This might be the most dramatic red carpet moment ever.

This ruby gown is like the red carpet, but better.

The quintessential definition of "pretty in pink."

This pair used their red carpet appearance to make a strong statement.

The Game of Thrones star looked amazing in black and gold.

Talk about a vision in red.

The fashion game was definitely strong on this year's SAG Awards red carpet. You don't need to choose a favorite — all of these looks are worth an award.

More like this
The Best Celeb Looks From Tommy Hilfiger’s NYFW Show
By Dominique Norman
Bella Hadid's Best Fashion Week Runway Looks To Date
By Allie Fasanella
Taylor Swift’s Latest Midnights Look Went Heavy On The Glitz
By Allie Fasanella
Ruffles, Velvet, Puff Sleeves, And More Plus-size Trends At The 2022 Emmys
By Dominique Norman
Get Even More From Bustle — Sign Up For The Newsletter